A Common Sense Approach to a Wise Allergy Elimination Diet

We have sayings like “You are what you eat” and “One man’s meat is another man’s poison.” That was before political correctness (PC) and women were allowed to be wrecked too! Now the gals can join in. They have all their own peculiar symptoms and we’ve gifted one of ours to them!

It’s surprising how few people follow up on these adages, even when they can quote them!

If Lucretius was correct about “one man’s meat”, then you can say with certainty that your arthritis, lack of energy, rash, bellyaches, depression, heart disease and diabetes, whatever, are truly the result of what you are eating.

Sadly, I think Lucretius himself could have suffered miserably from food allergies because he underwent periodic bouts of “insanity”.

I’ve had many psychiatric patients where the trouble turned out to be something the person was eating. Schizophrenia and wheat allergy were connected back in the 1980s; today we have David Perlmutter writing about “Wheat Brain”.

One bipolar patient of mine who went manic every July I traced to a particular mold allergy: Cladosporium, which peaks about July 12th in England. It also shows up as an occasional contaminant of food.

My theme for the New Year starts off with…if you are not bounding in energy, sparkling bright in mind, filled with joy, lust (yes, that too) and youthful preoccupations, there is something wrong!

And the chances are, that something is a food you are eating. Even if not, food may be contributing. Of all the important questions I ask patients about at the first consultation, symptoms like these are crucial… If I hear a YES, I know a food is going to turn up:

Note that almost all these symptoms have the powerful giveaway property of coming and going over a short space of time! 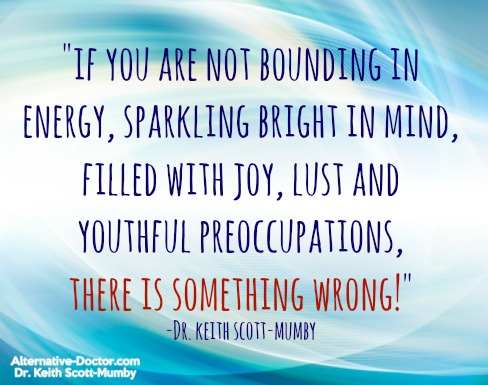 Everyone needs to investigate what foods are doing to us. The thing is, it is different for everyone:

Blaming manufactured foods, GMOs, caffeine, alcohol, animal proteins, soya, HFCS, canola and all the rest of it is just plain wrong. It’s like saying everyone has measles… it’s just not true.

Please be aware also that I am NOT talking about anaphylactic allergies: like peanut reactions, where the patient has to rush to hospital for an adrenalin and cortisol shot. These are slow, subtle, hidden and brutally destructive reactions that can remain totally hidden and undetected, without knowing the right technique to discover them.

Blood tests give very poor results, whatever you may have heard. Dowsers (which includes electronic dowsing machines like the Vegatest) are next to worthless, unless the operator is very good. The “reading” turns out just to be the enthusiast’s prejudices.

Whereas I admit I am brilliant at getting to the bottom of these things (I built an entire career on it), there are some good self-help techniques and I am willing to teach them to you.

I can’t talk to you each individually, obviously, so I have set up my Diet Wise Academy online, it’s packed with over 20 hours (50 videos) of me talking about all this and how to help yourself discover what food is doing to you using an allergy elimination diet.

For those of you who are new to my list, it’ll give you an idea of my brassy style anyway!

Better yet, the NEW INSIGHTS you offer that are grounded on finding out what NOT to eat are … elegantly beautiful.

You’re new recipes for health provide ingredients of valid information, are easy to stomach for practical understanding and are delightfully flavored with bits of subtle humor which adds new, saucy flavors based upon rational UNcommon sense.

By that I mean, if your insights were already Common Sense, then every doctor or patient would already know AND APPLY this stuff … which isn’t being done for whatever reasons of greed or ignorance.

I saw my father’s symptoms of rheumatoid arthritis get worse for 20 YEARS of increased prescription doses until doctors finally overdosed him – – prednisone, cortisone, gold shots and, the straw that broke the camel’s back, 16 uncoated aspirin a day – – on top of his ‘good’ foods! Aspirin toxicity made him so dizzy he couldn’t stand well or drive to work. So, he lost his job and became bed-ridden and in extreme pain, One of his hip joint’s X-rays looked like bone-on-bone tiger’s-teeth needles. We literally carried him to the bathroom as a walker was impossibly painful by then.

Doctors solutions? … only life-long bed-ridden pain or (waaaay back then) a new-fangled thing called “Hip replacements.”

A change in NUTRITION is what rescued him after my desperate mother found an OLD Osteopath and applied the NUTRITIONAL concepts she’d been taught in the 1920’s. (Today’s ‘modern’ Osteopaths are NOT taught nutrition – – having been transformed / indoctrinated into by primarily pushing pills and surgeries)

That older-wiser Osteopathic lady-doctor slowly tapered Dad off the meds, over a 6 month timeframe, and instructed us to immediately build a greenhouse including a recipe for an almost black soil-mix providing organic, ionic minerals – – not just any mineral-deficient “dirt from the back yard.” He ate two huge bowls of FRESH vegetables each day with emulsified, mint-flavored cod-liver oil.

However, he was instructed to AVOID all plants from the Nightshade plant-family; tomatoes, cucumbers, peppers, potatoes…

Long-story-made-shorter, 3 years after building Dad the greenhouse, when I was discharged from the Army, Dad had already been OFF ALL meds for 2 1/2 years and was driving a STICK SHIFT car. (Lots of hip movement required!) His body’s joints knew what to do and had REBUILT his bones WITHOUT ‘hallowed’ synthetic-med prescriptions!!! His last X-rays clearly showed this.

Based upon your insights, I NOW believe that the major shift in his DIET was WISE in that he was ALSO probably (unknowingly) AVOIDING many more of his undiagnosed previous “arthritic” food intolerances / allergens. Meaning, probably more than just those listed “nightshade” plant sources.

You’re not like Dad’s 3 Rx-med doctors who saw his dramatic X-ray changes and OBVIOUS healing … yet, WERE NOT the least bit interested in asking “Why?” or How?”

So, Dr Keith Scott-Mumby, Thank YOU for contributing so much UNcommon sense toward helping uplift humanity through shared knowledge THAT WORKS.

You’re a gift to anyone who will FIND, listen to and APPLY your real-patient, clinical wisdom.”