A Feast Of Interesting Science and Insane Breakthroughs!

Here’s a pot-pourri (a miscellaneous anthology) of intriguing and interesting science. I’m posing the questions but not telling you how to get the answers till the end.

1. The most powerful nutrient on Earth is not a food, a vitamin, a mineral or a phytonutrient. It’s very abundant in this universe and could solve almost all nutrition deficiencies. Want to know what it is?

2. What does a bee visiting a pretty flower to pollinate have in common with humans having sex? Nothing at all, you think? You’d be wrong. There’s an essential clue at such moments to the whole nature of this universe and what happens in it. It’s particularly critical to the understanding of life and therefore, of course, to any healing arts… 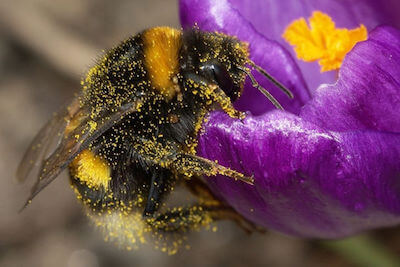 3. Did you know that humans can synthesize sunlight faster and more effectively than plant chlorophyll? We are our own solar panels. You were told at school that only plants could convert sunlight to sugars, right? I kid you not… a pigment that is plentiful in human cells is so powerful at converting sunlight, it’s now being put into photoelectric cells. Batteries run for years on it, without needing re-charging.

4. Could the human body be an LCD crystal device? It would explain why some signaling in the body is virtually instantaneous (nerve conduction is too slow). This model was proposed and amplified by Mae-Wan Ho from the Bioelectrodynamics Laboratory in Milton Keynes, UK, and her colleague James Knight, from King Alfred’s College, Winchester.

They proposed that the acupuncture system and the DC body is in the liquid crystalline collagen fibers that make up the bulk of the connective tissues. It constitutes a “body consciousness” working in tandem with the “brain consciousness” of the nervous system.

Mechanical pressure on any part of the liquid crystal system results in an immediate global current of transformation.

How could this work? 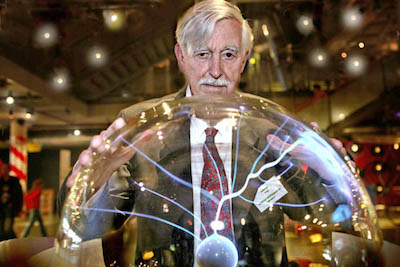 5. Here’s a picture of a man standing by a plasma ball, who created “problems” for cosmology. The errors in current scientific thinking he exposed were answered by erasing his name from texts and blanking out parts of photographs that show what he was talking about! That’s how sick modern science is!

6. How would you like the intellectual prowess to learn 500-1,000 foreign language words in a day… AND be able to remember over 80% of them after two years, when re-examined?

Thing is, you would also feel better, have lower blood pressure, less cortisol, more serotonin and dopamine (the happy neurotransmitters), lose weight, sleep soundly and a host of other benefits, as well as learning a language easily!

I know how it’s done and I’m going to share the science of the method with a select audience soon!

7. Does this illustration remind you of DNA? It should, because it’s a double helix, intertwining. It’s something that happens in a plasma and has enormous consequences for life. The only surprise is these “DNA filaments” are actually a nebula in the constellation of Cygnus (The Swan), which lies an estimated 1,470 light years away (8.82 followed by 15 zeroes) miles away.

The Follies Of “Pure Science”

Louis de Broglie, one of the founders of modern quantum physics, called modern physics “pure science”. That’s kind of the opposite of “lumpen physics”, a term invented and used by Einstein. These lumpy, “impure” sciences rely heavily on experimentation and observation. How ugly! Imagine looking at “stuff” and what it does, instead of beautiful math equations!

[Would you like to drive along the highway with your windows blanked out and just a computer screen giving you the probability of a car coming in the opposite direction? Well, that’s kinda what modern science does!]

From Newton’s time and accelerating with James Maxwell (electromagnetic equations), physics has become more and more mathematical. Today, without a spray of mystical (almost cabbalistic) symbols, such as sigmas, deltas, integrals and divergences, your truth is not “real”. Even mere numbers and signs, such as 1 to 9 and plus and minus, are not so important as the manipulations of data: the equations.

Science has all-but-vanished under the welter of mathematics. It now believes itself to be nearing completion. We’ve hard that before, haven’t we? (snigger)

In 1824, French scientists Jean-Baptiste Biot said that with the theories of Newton and Coulomb, we were done… that physics had become an almost-complete edifice. The great Victorian scientist Lord Kelvin insisted that physics was finished and we were just sorting out the details, down to the last few decimal places!

Yet at the very start of the 20th century, along came three theories that brought the entire edifice of science-as-we-know-it crashing down as false: radioactivity (one substance changing into another), quantum physics (things could be in two places at once), and relativity (time and space were “negotiable”).

Have they learned humility? Not a bit of it. Now string theory has collapsed, in the crash of its eleven dimensions. But, hey, it doesn’t matter: scientists expect rescue from the huge CERN accelerator outside Geneva, Switzerland. It will—for sure—discover some new fundamental particle that will make everything alright, like when Mummy sticks a bandaid or your poorly knee!

Ha ha! It’s pathetic! Nothing can shake the blind faith of scientists in the status quo. For all their posturing about experiment and enquiry, they HATE anything new and outside the box. They won’t even LOOK at it!

It’s even in their subtle language, if you listen: “I’m going to do an experiment to prove that…” You don’t do experiments to prove anything; you do experiments “To find the truth about….” If you are trying to prove what you already (think) you know, then you are not researching at all!

But try getting past the peer review system. It says, in effect, that all science which doesn’t back up what we already think is phoney science—even voodoo science or fraudulent science (remember the accusations of fraud against Jacques Benveniste, for daring to prove that water has a memory). Peer review is essentially censorship which ensures that no rogue scientific theories ever get published in mainstream journals.

So that entitles them to go on saying these new ideas are “not scientific”. I think the majority of the scientific community actually believes that!

Even this week, I received an email from Jean de Climont (author of The Failure of Pure Science) informing me of research that is said to prove that all of modern thinking on the properties of the electron and the nature of electricity is wrong. Electricity is NOT what we have been told. Once again, the story is that nobody is looking at the evidence… [link below to the YouTube video]

Please note this is a VERY technical video.

The post A Feast Of Interesting Science and Insane Breakthroughs! appeared first on Dr. Keith Scott-Mumby.