A Testing Breakthrough For Hidden Cancers

Almost every time I write about cancer, I add the injunction to hang on tight…. Things are moving so very fast that, apart from the corruption in the industry, the problem may soon be solved!

One of the most important things we have been in need of is a way to test for cancers l-o-n-g before there is a tumor. Current medical science cannot detect anything smaller than a pea and even bigger ones often get missed. 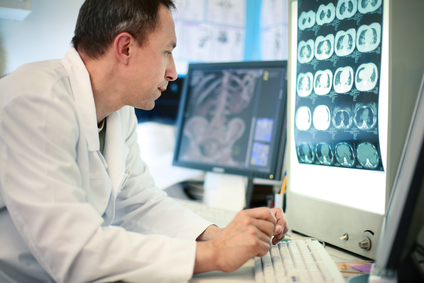 Scans are a waste of time and very dangerous. A CT scan delivers as much as 500 times the radiation of a standard X-ray, potentially causing an estimated 1.5 to 2 percent of all cancers in the United States. PET scans are even worse, because the whole body is exposed to radiation.

A study of database records of more than 31,400 patients who had a CT scan in 2007 at Brigham and Women’s Hospital or Harvard’s Dana-Farber Cancer Center found that 15% of the patients had received estimated cumulative radiation doses that were higher than the radiation exposure from 1,000 chest X-rays.

In other words, these “screening” methods are likely to create more cancer than they detect. Using them is nuts, if not criminal!

What’s needed is a chemical screening that can tell, early on, that a patient is harboring a cancer; I mean very early on, when treatment is easy and can be accomplished by little more than changes in diet and lifestyle.

Waiting for your orthodox oncology markers to show up is like waiting till you are really in the danger zone. By the time they are elevated, you are in trouble.

What could be better then?

Well, suddenly a whole rash of cancer marker tests have shown up. Dr. Garry Gordon waxes lyrical about the profile of tests carried out by Dr. Kobayashi in Japan. But now there is more choice than ever.

There’s the Oncoblot test, the CYP1B1 and Dr. Schandl’s “Cancer Profile”. Each of these is far superior to the AMAS test of the past which, despite claims, is not highly reliable. It was the best we had for years but that’s no longer true.

The Oncoblot blood test identifies a specific type of protein in the blood, ENOX2*, which exists only on the surface of a malignant cancer cell. The ENOX2 proteins are shed into the circulation and can be detected in the blood. These proteins serve as highly sensitive markers for early detection in both primary and recurrent cancer. It’s organ specific, meaning it can often tell with certain where the cancer is located.

The physician draws the blood and sends it to the lab. Results take approximately 15 business days. The cost is $850.00 at this time. (www.oncoblotlabs.com)

But does it work?

Based on analyses of over 800 Oncoblots covering 26 different kinds of cancers with clinically confirmed diagnoses, 99.3% were positive for cancer based on ENOX2 presence.

Of these, the organ site of the cancer was determined correctly in 96% of the samples; there were no false positives; and less than 1% false negatives.

To gasp the potential of this test it’s necessary to do a bit of in depth explanation.

Let’s back up and talk about salvestrols. These are potent plant chemicals and are probably the real reason that raw, healthy plants protect us against cancer, not antioxidants. Resveratrol is the best-known of them.

In a series of papers in The Journal of Orthomolecular Medicine, Professor Gerald Potter, Head of Cancer Drug Discovery Group, De Montfort University, Leicester UK, and Professor M.D. Burke and co-workers introduced the concept of salvestrols and gave them the name. Together they developed the PYP1B1 enzyme test.

I’ll do a fuller piece on these at some future time but suffice it to say that salvestrols destroy cancer cells pretty well. They are highly anti-inflammatory and a sort of botanical police force for the body. One of the reasons cancer and degenerative diseases are increasing so much in the West is likely that food processing and manufacture drastically reduces salvestrol levels (they taste rather bitter and are deliberately removed).

The key to investigating the properties of salvestrols is an enzyme called PYP1B1, which does not occur in healthy cells; it’s only found in cancer cells, such as breast, colon, lung, esophagus, skin, lymph nodes, brain and testis. Salvestrols are metabolized by PYP1B1 into a metabolite which destroys cancer cells. This is an arrangement which suits us very well.

We can test for the presence of PYP1B1 and, if it’s found, infer that a cancer is present. We can then load the system with salvestrols and the PYP1B1 will produce the cytotoxic metabolite and wipe out the cancer. At that point the PYP1B1 will vanish, because only cancer cells have it!

There are NO false positives, the developers claim. If there is PYP1B1, you have cancer. Period.

I expect one day Big Pharma will try to develop a drug to fit into this schematic. But for the moment they remain icily cold towards salvestrol research.

Incidentally, salvestrols are destroyed by fungicides on plants, AND Laetrile (Amygdalin). You all know I do not accept any research that says laetrile is a valid anti-cancer agent (except that cyanide kills all cells; that’s hardly helpful). Anyway, here’s proof, if needed, it doesn’t work and is destructive, compromising nature’s own natural cancer protection.

The results claimed for laetrile (amygdalin) are without exception the results of OTHER actions taken at the same time. No study has ever been carried out investigating only laetrile in humans.

So far as I know the PYP1B1 test is not offered publicly at this time.

Dr. Emil Schandl is certainly a survivor, having lived as a Jew in Nazi Germany, fought in the Hungarian uprising of 1956 and then made it to freedom. He founded American Metabolic Laboratories in Hollywood, Florida.

It centers around an analysis of 6 key enzymes, each of which alone might not be so accurate but, taken together, give a very good score rate.

For example, 68% of cancer cases show elevated levels of human chorionic gonadotrophin hormone (hCG). When the measurement was for the enzyme PHI (phosphohexose isomerase, a tumor marker that regulates anaerobic cellular metabolism), levels were elevated in 36 percent of the patients; with the enzyme GGTP (gamma glutamyl transpeptidase, a sensitive liver enzyme), levels were higher in 39 percent of patients; and a test for CEA (carcinoembryonic antigen, a general tumor marker, originally designed to monitor colorectal cancers) showed elevated levels in 51 percent of patients.

These are great scores.

But Schandl also added 2 more tests which are revealing: thyroid stimulating hormone (I have written in all my books that thyroid hormone is crucial in cancer cases); and DHEA.

He has tested thousands of patients with this profile, with accuracy greater than 90 percent. When a patient is actually being treated for cancer, Schandl’s tests can be used to monitor the success (or ineffectiveness) of ongoing cancer therapy.

Don’t forget, as always, you can get a copy of my comprehensive cancer guide “Cancer Research Secrets”. As an owner of the book, you get a free membership to a continuity site, where I published frequent updates, as they are announced in medical journals and the media. It’s the book that never ages!