I’ve been a doctor for a long time and I’ve watched the “trends” in health ebb and flow.

Poor Choices Are Catching Up to Us

I watched as the “low-fat” craze swept the world in the eighties and knew we were going to see serious repercussions. I watched sugar take a place at the head of our diet table and knew it would come with critical consequences. I found myself amazed as food manufacturers filled the stores with junk I wouldn’t feel comfortable feeding a pet, much less a human being.

As a doctor, I shuddered at the explosion of the pharmaceutical industry over the last four decades. I found myself in true shock as pills flooded the market, prescribed hundreds of thousands of times, without proper long-term testing or explanation of side effects.

I’ve stared on in bafflement as other doctors turned almost completely to treatment of symptoms rather than resolving the cause of one disease after another. The “new solution” of the latest drug handed to millions of patients as doctors pocketed fortunes in kickbacks from Big Pharma.

Shaking my head, I’ve been a front row witness to the degeneration of the medical industry, drug companies, and insurance corporations focused too much on profit and not nearly enough on the wellbeing of the people who need help.

One aspect of human health that continues to amaze me is the blind eye regarding women and heart disease. While we lose hundreds of thousands of women in the United States annually – around 8 million women worldwide – it seems bizarre that no one is talking about it.

Where is the outrage? Where are the walks and ribbons?

The Centers for Disease Control and Prevention (CDC) states that a vast majority of women don’t even know heart disease is a serious risk!

Ask any woman what they think is the biggest health risk they have to worry about and they’ll tell you breast cancer. The media storm surrounding breast cancer makes it seem the biggest, baddest threat on the horizon. You’d think more women die from breast cancer than anything else and that it’s the main thing females need to be worried about in regards to their health.

It’s not even close.

A woman dies almost every minute from heart attack or stroke. Every minute of every day, a woman dies and more than two-thirds of them won’t feel a single symptom. They won’t know what’s happening. For many, a major (and possibly deadly) heart event will be their first indication of a problem with their cardiovascular system.

Heart disease is the #1 killer of women.

When women and heart disease interact for the first time, women have a lower chance of survival than their male counterparts. 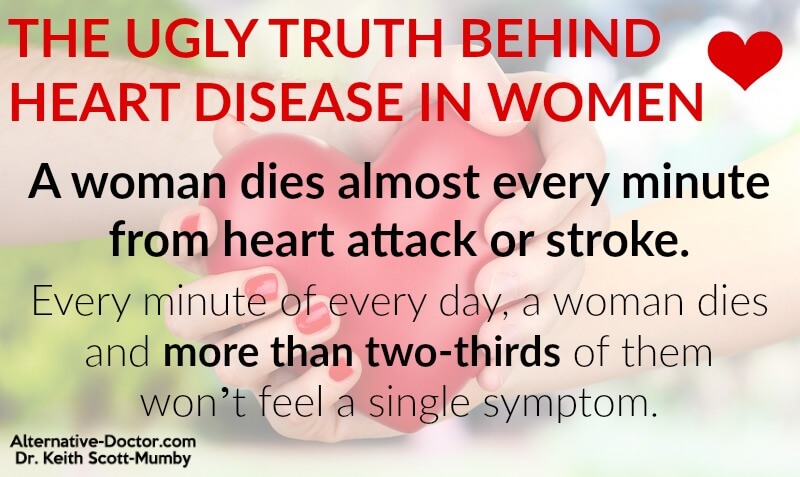 The Ugly Truth Behind Heart Disease in Women

There was a time that only women over the age of 55 had to be worried about heart disease. Post-menopause and changes to hormones were thought to increase risk.

Now…women ages 40-65 are the highest risk demographic. It seems that every year, the ages of men and women impacted by heart disease are younger and younger.

It infuriates me. It’s true that more people are surviving massive heart events than they used to but why are so many people having heart attacks and strokes in the first place? What are the main reasons women’s heart disease statistics are so out of control?

Then there is the fact that women aren’t counseled about heart disease by their doctors. If they present to the hospital with symptoms of a heart event that isn’t like the “television heart attacks,” they have even been sent home!

A woman having a heart attack isn’t like the ones that happen in the movies. The heart attacks you see on the big screen represent the most common symptoms (numbness in the left arm, chest pain, shortness of breath) that men have during a heart attack…not women.

As I mentioned, two-thirds of women won’t have any signs at all! When they do feel “something isn’t right,” they still might not think it’s a heart attack because it isn’t usually similar to what men feel before a heart attack.

The bottom line is that women must act right now to protect their hearts.

Men have to get involved and know the facts about heart disease and women. We all have wives, mothers, sisters, and friends who think WE MEN are the ones at risk!

My good friend Alex Bradford has written a special free report for women specifically called “Why Your Heart is Modern Medicine’s Deadliest Blind Spot” and I highly recommend you download it right now.

Do it for your heart or for the hearts of the women in your life. In the time it took you to read this article, several more women died from heart attack or stroke.

Heart disease. As much of a woman’s disease as a man’s and we have no time to waste.