Attitude of Mind & The Longest Survivor of Lymphoma

August is the time of the Edinburgh Festival, in Scotland, and a good time for me to catch up with my friend Hunter Walker (see photo, which was just before the cloudburst!). 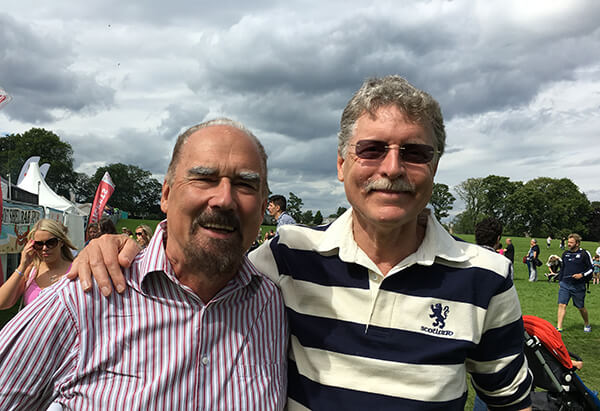 I have known Hunter for over 20 years. He is a survivor of Hodgkin’s lymphoma, possibly the longest surviving in the world. Between us both we stack up 136 years and we both look great, I think.

Now many of you know I do not scorn people who want to take the conventional route for cancer therapy. It’s the person’s own choice. Snotty “holistic” believers who sneer at this are—to my mind—vile and sanctimonious. In Hunter’s case, it was so long ago, that fighting it alone was almost unheard of.

Long story short: he survived radiotherapy and did very well. To read some silly writers, you’d think radio- or chemotherapy was a death warrant. It may not be the best way to go—and for some—it is deadly because they cannot detox sufficiently fast.

But there are over 12 million survivors of orthodox therapy in the USA alone; I don’t have the world figures.

I asked Hunter what he attributed his success to? Attitude of mind, he said, unhesitatingly. “I never thought of dying. All I had in mind was let’s get through this, get it fixed and get back to a normal life. I was young. That’s what you do.”

Put another way, I suppose he’s saying that the doctors never fazed him out. If they gave a poor prognosis, it didn’t register as applying to him! Of course you could say that Hodgkin’s is relatively survivable. That’s true.

But here’s another story, of a friend of Hunter’s, who had small-cell cancer of the lung: very deadly. She walked through it and… again… it’s all about attitude of mind! I wrote about her in my cancer survival guide Cancer Research Secrets.

For anonymity, let’s call this lady Tash, which is her nickname. When I met her she was coming up to the 5-year mark (now over 8 years). This is a deadly tumor. Once established, not many people make it to the 5-year point (2-8%, depending on grade).

Like Hunter, Tash was convinced that attitude of mind will save your life.

She is a perfect example of the person with “attitude”. Tash has a blatant contempt for science, statistics (especially) and arrogant doctors! You have read my comments on this before: Those patients who do best with cancer are not the meek and obedient ones, who do everything the doctor says, but the ones with a feisty “Go f**k yourself” sort attitude to the medical profession.

So, one fine sunny day (it later turned to torrential rain) Vivien and I made our way to the town of Gairloch, in the beautiful Western Highlands of Scotland and met Tash.

The lady was gracious but at once lively and entertaining, with not a hint of gloom; jokes and laughter seem to be as natural to her as breathing. “The purpose of life is living”, is her motto.

She described herself as a “bolshie old fart”. It could be life-saving, as we Boomers know.

Like me, Tash had grown up in the 1960s “flower power” era; she was at that time a well-known person in the Scottish folk music scene. This was also the time of free love and the result was a child which, under pressure, she had had adopted. For completeness, it should be said that, at age 30, he found his Mum and has forgiven her completely. He turned too out to be an artist and a musician.

Eventually forced to face the economic realities of life (to grow up, in other words), Tash had graduated at university and gone to work as a civil servant in the Scottish Office. That career lasted decades until, on a wild impulse, she quit her job and went to Australia. Likely she would still be there, she confided in us, but that her father fell fatally ill and she came back to Scotland.

It Started With The Cough…

It started as a persistent cough and then one day there was blood. In someone who had smoked heavily, even though she had given up for many years, it was bad news…

So came the grim diagnosis of small-cell cancer of the lung. Tash accepted the recommendation for chemo and radiotherapy but wisely decided to try and throw other treatment modalities at it.

“No, I’m not having this!” she raged to herself and others. She was going to heal and heal she did. Within four months, this deadly tumor was gone from her body, confirmed by x-ray and biopsy.

Coincidentally, she had a friend in Edinburgh diagnosed with small-cell lung cancer at about the same time. That friend is now dead. The difference is hardly down to lousy doctoring; the difference was that the friend accepted her doom, just as the doctors pronounced it. She didn’t even want to talk about it, while in contrast Tash took the rise out of doctors and talked about her cancer to everybody.

So what was her strategy? What did she do? Stay away from pessimists was one key point of advice. She had her lucky stones; Viv and I saw them but weren’t allowed to touch them. There was a snowflake obsidian, the cancer stone; jasper for courage; and she showed me what she called a recovery stone, to be sure it wasn’t coming back.

There was a homeopathic remedy called mulla mulla, which is good against fire and hence protects against radiation therapy.

She had people praying for her, even though she is dismissive of organized religions. There was a church in Africa that sang and prayed for her. A buddhist in Nairn offered to pray for her. A lady in the spiritual church in Livingstone also asked and Mary, the mother of a friend at the Roman Catholic church in Edinburgh. “For all I know it could be Mary that cured me,” she quipped.

There was also the feeling of a lot of support from my friends; “a network of love” as she described it.

Let me tell you: this is CRUCIAL. You cannot fight a cancer alone. Warmth, love and support from others is crucial. If your family are cold and hostile or insist you do what the doctors say, LEAVE HOME IMMEDIATELY. 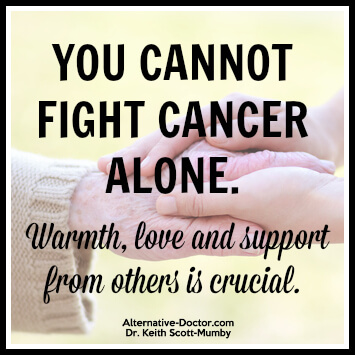 The key thing in her case was the use of internal imaging, “visualization” as it’s called. Sometimes it’s good to nurture your cancer cells; talk to them nicely and try to persuade them home to health. But none of that for Tash; she wanted them dead, D-E-A-D! Gone!

Being a country-based person, for that she enlisted the aid of imaginary sheep dogs. As she explained to me, there was a need to stop the rogue cells escaping control, to prevent them running amok and metastasizing. What does rounding things up and keeping them penned in bring to mind? Obviously, sheep dogs. She used two: a mother, Meg, and her son Rob.

For those of you who like mystical woo, a friend took a picture of two nice sheepdogs she saw one day in the back of a truck, for no reason apparently, and got the thought she should send the photo to Tash, again for no logical reason. The friend did not know about the visualizations. But when she got the photo, Tash recognized them at once as exact look-alikes of her imaginary Meg and Rob!

The doctors had warned Tash that radiotherapy could burn her gullet and throw her appetite off. When asked how she coped, Tash humorously told the doctors, “I can’t tolerate the more robust New World red [wines] any more!”

Fortunately, she had now got over this “disability”! So, as if on cue, I sent Vivien out for a nice, smooth, full-bodied New World Shiraz, which we all enjoyed together as we continued to talk.

When it came to the radiotherapy, she had adopted a different visualization, which was a countryman, with wellington boots, and a shotgun, blasting people. She has a written hit list of most-hated politician’s and other public figures of the day (Robert Mugabe, the Burmese generals, and so on). One by one she would have the phantom with the gun shoot them down, while lying on her back being zapped. It was quite cathartic, she confided. The hospital staff were astonished to find her often grinning after the treatment, where most people were reeling and sick!

“Even now, when I’m feeling down, I get the list out and have a good laugh,” she giggled to Vivien and me. From the relish with which she spoke about this technique–and in fact she said as much herself–this was probably Tash’s single most effective creative visualization and helped her conquest of the disease the most.

“So much bloodshed, so few tears!” she joked. “Get in touch with your inner sadist!”

For those of you who are moved to do so, there’s an audio online, of the recording I made of this conversation. I’m sure you’ll do fine with the Scottish accent. Go here now to listen.

Meantime, if you haven’t yet read it, you need to get yourself a copy of my “cancer survival manual” Cancer Research Secrets.

The post Attitude of Mind & The Longest Survivor of Lymphoma appeared first on Dr. Keith Scott-Mumby.