Benefits of Oxytocin the Cuddle Hormone

The Cuddle Hormone (Can I Get Shots?!)

Oxytocin was once thought to be an exclusively womens’ hormone and involved only in setting up uterine contractions during labor and squeezing the uterus empty after birth.

Now we know both sexes have it and it performs a great role in love and bonding: so much so it’s sometimes called the “love hormone” or the “cuddle hormone”.

Lots of oxytocin gets released at orgasm, in both sexes. Hmmm. Like to get regular injections for that, wouldn’t you!

The basic point, in Nature, is that the mother will bond with her newborn and love the child. Her nurturing desires are what will take care of the little baby for months, even years, to come.
With this new understanding of its essentially psychological role in humans, scientists have started to study the impact of oxytocin on a variety of social situations and interactions.

New research presented at the 2010 annual meeting of the Society for Neuroscience in San Diego has also traced oxytocin’s effect in boosting trust and empathy (to the point of increasing the wish to donate to charitable causes) and in reducing anxiety and stress.

Also, the higher your oxytocin blood levels, the higher the benefits of oxytocin, and your happiness and well-being will soar, at least for women.

And, perhaps not surprisingly, those women with higher oxytocin had more sex with fewer partners, reflecting more long-lasting relationships. They were likely to be liked by other people. 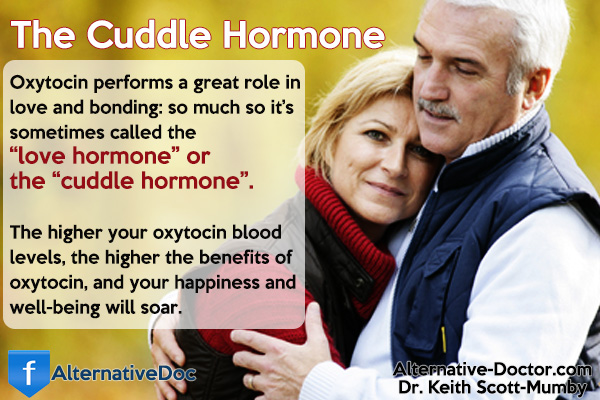 But the researchers were reluctant to allow that these findings might translate to men. However the study leader did admit to an earlier study which focused on men and found that men treated with the love hormone were more generous after watching public service ads.

Those on placebo donated to 21% of the ads, those on oxytocin 33%. Moreover, the men given the hormone donated 56% more money to the causes than men in the placebo group.
Oxytocin seems to control the balance between self and others in the brain.

Of course cynical advertisers are onto the power of oxytocin. Why are puppies in toilet paper commercials? Because pitchmen know people feel good about puppies — hopefully so good their brains will release oxytocin. That can make them more likely to buy the product.

But that’s exploitation, not science.

Predictably, there are the naysayers. Despite some of the promising new findings, Sue Carter, PhD, professor of psychiatry at the University of Illinois at Chicago, was quick to warn: “People are trying to treat autistic kids [with oxytocin] in the absence of [definitive] research.”

It could have long-term negative effects. Well, she’s right of course. But you feel she’s coming from a party pooper perspective (try saying that 3 times fast!), rather than worthy scientific caution.