What have I been up to this week?

Being a grandparent is not always 100% fun! Taking a young person around with you can sometimes feel like you have a bag of Semtex strapped to your back, ready to explode! 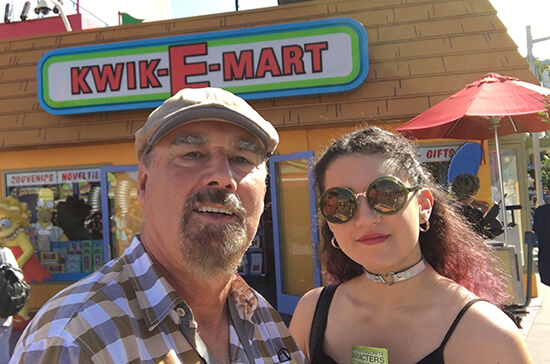 Here’s me with granddaughter Emily (age 16 yrs) at the Universal Studios, Hollywood, outside Kwik-E-Mart of The Simpsons fame! It’s tough when age has you on one of the rides feeling like your brains are relocated to your backside but the youngster next to you is laughing with excitement, eyes sparkling, and says, “This is GREAT!”

Of course it’s all fun really…. No, I mean really…

Here is a Kwik-Kwizz question: why would drugs approved by the fast-track route end up being more dangerous?

Answer: almost certainly, the drug companies know they have a loser and want it to by-pass the normal drug approval process, to get it to the market fast.

The reality is that 25% of normal drug approvals result in a safety warning or the drug being withdrawn. In other words the “approved” drugs turns out to be dangerous or damaging. That in itself is pretty shocking. Think about it. 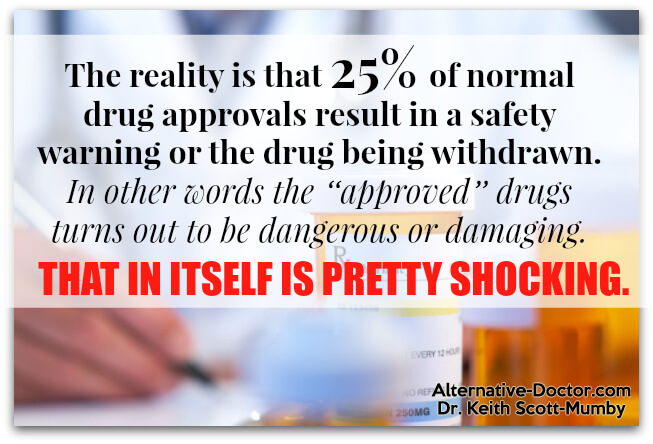 It seems to me, in my lifetime, that medicine has been gulled into accepting that pharmaceuticals are dangerous, but that’s what you do… the dead or injured patients are just collateral to the “process”. If someone had told me that a quarter of medical treatments were dangerous or deadly, I would probably have quit my medical career before it got started.

Of course it was the Nazis and the infamous Dr. Josef Mengele that began the idea that humans are just test animals—you round up a bunch of them, apply a “treatment” and see how many die.

We also know that today’s Pharma is basically the Nazi party reworked and has achieved the kind of world control and human slavery that Hitler could only have dreamed of (for those who don’t get this, Google I G Farben, the German chemical company founded on slave camp labor, and the connections to Roche, Bayer, Hoechst and BASF).

“Compared to the reality of the drug industry, my book reads like a vacation post card”, John Le Carre, Author of The Constant Gardener.

For those who STILL don’t get it, let me shake you awake: The U.S. government’s investigation of all the factors leading to the Second World War in 1946 came to the conclusion that without IG Farben the Second World War would simply not have been possible. It was not the psychopath, Adolph Hitler, or bad genes of the German people that brought about the Second World War. Economic greed by companies like Bayer, BASF and Hoechst was the key factor in bringing about the Holocaust.1

Of course the evil Nazi war criminals were all hanged at Nuremburg, weren’t they. No!

Take the case of Fritz ter Meer. His role in creating the slave labor camp at Auschwitz is widely known. He was a member of the IG FARBEN executive committee 1926-1945.

In 1948 Ter Meer was found guilty of “plundering” and “enslavement” and condemned to seven years detention. Seven years?? He only did 4 years and was released 1952. From 1955 to 1964 he was a board member of Bayer, eventually rising to chairman of the board.

But that’s not the end of it: Bayer honors Ter Meer’s grave every year with a wreath and actually had the effrontery and inhumanity to name a student support body after him.

REMEMBER THAT NEXT TIME YOU WANT TO TAKE A BAYER ASPIRIN, AN ALKA-SELTZER, XARELTO OR CLARITIN. You are sucking blood… You are, in effect, honoring a convicted war criminal.

Here’s some really chilling correspondence that just about sums up Big Pharma, in my view. It is a letter from the head of Bayer in Leverkusen to the commander of Auschwitz, concerning the buying of 150 female prisoners test a new drug:

“We confirm your response, but consider the price of 200 RM per woman to be too high. We propose to pay no more than 170 RM per woman. If this is acceptable to you, the women will be placed in our possession. We need some 150 women…”

“We confirm your approval of the agreement. Please prepare for us 150 women in the best health possible…”

“Received the order for 150 women. Despite their emaciated condition they were considered satisfactory. We will keep you informed of the developments regarding the experiments…”

“The experiments were performed. All test persons died. We will contact you shortly about a new shipment…”

At our disposal? Haggling over the price? Women “in their possession”? A new “shipment”?

These are words to make you shudder.

But let’s not forget the USA got in on the act and prevented the erasure of this evil empire. Instead they took it over; protected most of the criminals and finally enshrined the whole human slavery ethos into the FDA.

This jack-boot government department is not, of course, about “safety”—at least not for us—safety for the drug companies’ maybe. It’s really about continuing Josef Mengele’s work of experimenting on ze hooman animal.

So you will understand that although I find it intolerable, I am hardly surprised by any evil that comes of out Big Pharma.

Back to the story…

Research from Canada, published in online October 8, 2012, in the Archives of Internal Medicine, pinpointed the fact that “priority-review” drugs (Canadian equivalent of the FDA’s “Expedited Drug Development Pathway” fast-track process) were more likely to prove hazardous than those approved in the normal fashion.

Joel Lexchin, MD, from the School of Health Policy and Management, York University, Toronto, Canada, used the Therapeutic Products Directorate and the Biologic and Genetic Therapies Directorate to identify over 400 drugs approved between 1995, and the end of 2010. Of these, approximately 75% underwent the standard review process and 25% underwent priority review. (The US Food and Drug Administration has a similar fast-track process known as an “Expedited Drug Development Pathway”).

Of those drugs that underwent standard review, Dr. Lexchin estimated that about 20% subsequently gained a serious safety issue. Now compare that with 34% of the products that underwent priority review and were later found to be dangerous or withdrawn.

Certain drugs are given priority review as potential treatments for important clinical problems and may gain regulatory drug approval with a lower benefit-to-harm threshold.

But it seems to me that the harm rate ought to be the same for both classes of drugs. Just because there is an urgent need for a new therapeutic regimen doesn’t automatically imply an increased danger.

Of course the real explanation could be that the manufacturers know they have a problem drug and want to get it passed without being subject to the normal checks and balances. So they fast-track it and hope it works (like they did with the test prisoners in Auschwitz).

If it kills people then of course the profits are less and then it’s back to the drawing board.

Call me cynical but all this supposes that drug companies launch a product, not knowing that it will cause harm. But is that true? We know for sure that Merck lied about Vioxx. They knew from studies in advance it was going to kill people. SSRIs were known in advance to cause psychotic violence (and had NO proof of efficacy, incidentally) yet were pushed onto the market.

Among the many “side-effects” or SSRIs is the growing army of people who were victims of mass killings by individuals taking these worthless and destructive drugs. But psychiatrics in are full flight and nobody is there to stop them.

Until this winter… Watch out for my book Holistic Psychiatry, which will follow the imminent The Psychology Of Cancer book.

Back to normal next week! Delightful granddaughter goes home. Just take a look at Fall in the Southwest desert.

The post Big Pharma’s Fast Tracking Drug Approval & What It Means For You… appeared first on Dr. Keith Scott-Mumby.