Fabien Maman, a French composer and bio-energetic healer explored and documented the influence of sound waves on the cells of the body. He was fascinated with energetic healing techniques, and wondered if we are really touched or even changed by music? If so, how deeply does sound travel into our bodies? He began a year-and-a-half study joined by Helene Grimal, an ex-nun who had left the convent to become a drummer.

She supported herself by her profession as a biologist at the French national Center for Scientific Research in Paris. Together they studied the effect of low volume sound (30-40 decibels) on human cells.

They mounted a camera on a microscope where they had placed slides of human uterine cancer cells. They proceeded to play various acoustical instruments (guitar, gong, xylophone as well as voice) for periods of twenty-minute duration, while they observed the affect on the cells.

Cancer Cells Being Destroyed By Sound

These pictures above were taken while a xylophone was used over a period of fourteen minutes playing the Ionian Scale (nine musical notes C-D-E-F-G-A-B- and C and D from the next octave above.) “The structure quickly disorganized. Fourteen minutes was enough time to explode the cell when I used these nine different frequencies”, says Maman. 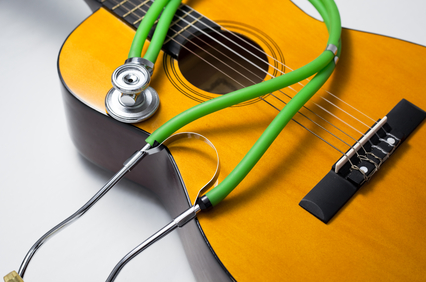 The most dramatic influence on the cells came from the human voice when Maman sang the same scale into the cells. In this experiment the cancer cells experienced a total explosion within nine minutes.

“The human voice carries something in its vibration that makes it more powerful than any musical instrument: consciousness. It appeared that the cancer cells were not able to support a progressive accumulation of vibratory frequencies and were destroyed,” reports Maman.

His findings in the laboratory setting urged Maman to continue his study, but this time he chose to work with two breast cancer patients. Each woman committed to tone for three-and-a-half hours per day over a period of a month. In one case, the tumor vanished completely.

The second woman underwent surgery to remove the tumor. Her surgeon reported that the tumor had reduced in size considerably, and had literally dried up. She recovered fully from the surgery and made a complete recovery. Maman’s explanation for this incredible phenomenon was substantiated by the photographs he had taken during his case studies.

He says, “the cancer cells show evidence of cell nuclei incapable of maintaining their structure as the sound wave frequencies attack the cytoplasmic and nuclear membranes.”

The vibration of sound literally transforms the cell structure. As the voice intensifies and time passes with no break in sound, the vibratory rate becomes too powerful, and the cells cannot adapt or stabilize themselves. Therefore, the cell dies because it is not able to accommodate its structure and synchronize with the collection of sound.

They cannot live in an atmosphere of dissonance and they cannot become resonant with the body. Therefore, the tumor cells destabilize, disorganize, disintegrate, explode and are ultimately destroyed in the presence of pure sound. 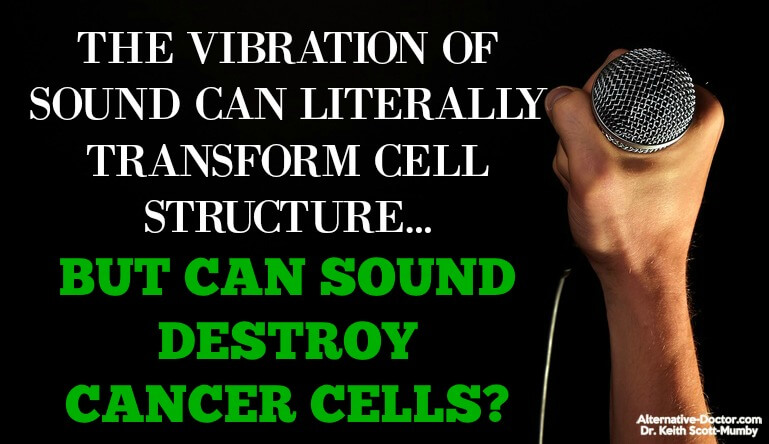 DNA Hears Music and Participates in the Phenomena of Awareness

Ever since music has been used as therapy, people have suspected that acoustic vibrations have a direct or indirect influence on the human organism, but no scientific proof has ever been advanced. But can music kill cancer cells?!

Indeed, there was not even a satisfactory theoretical approach. But with the work of Szent Gyorgyi and Herbert Frolich (both Nobel prize winners) and especially the recent work of Fritz Albert Popp on the biology of light and electromagnetic inter-cellular bio-communication, we know today that the nucleated cells, by the way of physical and vibratory configuration of its DNA, is capable of picking up, storing and broadcasting information (that is to say order and neguentropy) about the environment.

This suggests, among other things, that living matter organizes its environment, an idea which recalls the Gaia hypothesis of James Lovelock, 1989) demonstrated that cells communicates with one another, coherently, by exchange of photon quanta.

The Order and Coherence In Matter

Neguentropy or neg-entropy is a negative entropy without which no living system would be viable. By opposition to entropy which expresses an increase of disorder in the universe, neg-entropy is an impregnation of order and coherence into the structure of matter. In other terms, neguentropy is a force of information that organizes the structures and functions of living systems, and participates in inter-cellular bio-communication.

Jacotte Chollet, former television documentary film producer has met with many remarkable man, including Krishnamurti, Karl Pribram, David Bohm, Fritjof Capra, Paul MacLean, and other wise though lesser-known people such as the Papuans of New Guinea, the aborigines of Australia, the medicine-men of North America and the Caribbean. These encounters inspired her to make the attempt to expand her cerebral faculties.

Her quest led to a period of intense research that was to last over ten years, investigating the acoustical phenomena beyond the limits of human perception. During this research, her path crossed that of Lydie Ries, a biologist and Pr. Regis Dutheil, doctor and professor, co-director of the Louis de Broglie Foundation, who was working specifically on phonons, the particles that Albert Einstein had posited in his Theory of Relativity.

Jacotte has spent the last 17 years in her studio creating what she calls Multidimensional Music. Her experiences with the sound were extraordinary to say the least. In 1985 Jacotte started to test the effect of her music killing cancer on willing participants to see what healing properties the music contained, if it did indeed kill cancer cells.

Blood samples were taken immediately before and after listening to Multidimensional music for one to one-and-one-half hours in private sessions or workshops. These tests repeatedly showed a spectacular increase up to one gram in the hemoglobin level of the blood samples. Resonance with the expanded consciousness field present in the music was inducing physiological, somatic transformations in blood makeup.

Jacotte says, “Unity of consciousness can be established or re-established by direct contact between the music and the person experiencing it, which releases emotional knots and what might be called “cysts” in the parasympathetic system.

It may be observed that, in resonance with Multidimensional Music, these phenomena tend to disintegrate, and the effects is communicated from cell to cell throughout connected system.

The re-balancing of potentials along the meridians of acupuncture is also noted. The effects are physical, psychic and holistic .The phenomenon, originating with cellular perception of vibrations, is translated in part by increasingly specific sensations which correspond to a holistic self awareness.”