Can the Benefits of Folic Acid Help Prevent Memory Loss?

Can the Benefits of Folic Acid Prevent Memory Loss?

A published in the Lancet Jan 20th 2007, has shown that the benefits of folic acid significantly improves cognitive performance in older adults — specifically as it relates to memory and information processing.

A randomized, placebo-controlled trial, which included 818 subjects aged 50 to 70 years who were folate deficient, showed that those who took 800 µg daily of oral folic acid for 3 years had significantly better memory and information processing speed than subjects in the placebo group.

The study was really intended to study the effects of folic acid and arteries, a controversial subject, linked to whether or not homocysteine is a valid measure of risk for heart attack and stroke. These findings fo cognitive function were quite incidental – but very welcome.

The trial took place between November 1999 and December 2004 in the Netherlands. A total of 818 patients were randomly assigned to receive 800 µg of daily oral folic acid or placebo for 3 years. 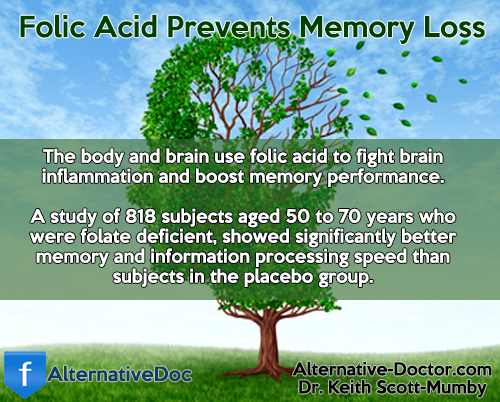 The authors report participants in both groups were well matched with similar baseline scores.

Among individuals in the placebo group sensorimotor speed, information-processing speed, and complex speed declined significantly. In contrast, those in the folic acid group experienced a much slower rate of decline.

Furthermore, the 3-year change in cognitive function was significantly better in the folic acid group in terms of information-processing speed. However, folic acid had no effect on complex speed or word fluency.

“The effect of folic acid might be restricted to basic aspects of speed and information processing, rather than high order information processing. Word fluency was not affected by folic acid supplementation, perhaps not surprisingly because encyclopedic memory is a component of crystallized intelligence that stays relatively intact as one grows older,” the authors write.

), as they call it). Make sure you get the right stuff.