This week sees the launch of my latest book The Psychology Of Cancer. 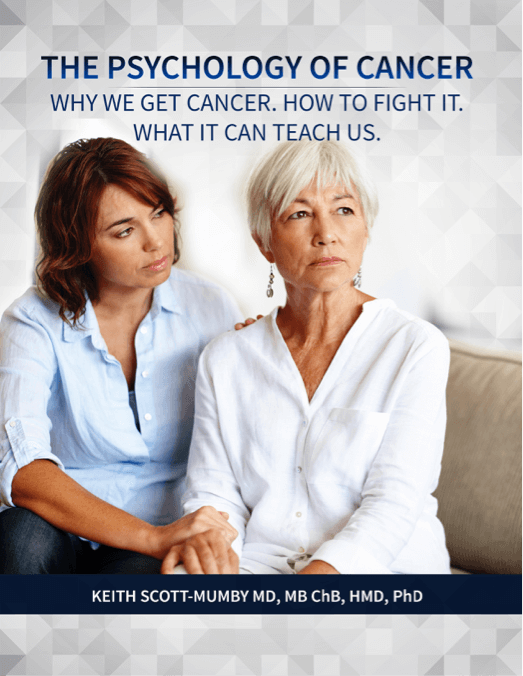 It’s an exciting multi-dimensional book, bursting with different ideas and things to do. In fact, one of the first things to say is that most of it applies to any disease process, not just cancer. We all get sick for a reason! You’d think, listening to conventional doctors, that diseases happen by chance. They don’t. There is a cascade of events, which leads finally to the point where the body can no longer cope.

At that point the symptoms switch on and the patient is now in BIG trouble, because the defense mechanisms have already been exhausted, do you see?

This latest book has three sections:

Part 1 explores the idea of a cancer personality or “type C” personality. Although this remains controversial, it isn’t among those who know. There is clearly a type who is likely to get cancer. I explain the main characteristics in the book.

But there are also stimulating or “trigger” factors. Dr Ryke Geerd Hamer came up with certain “laws”; a bit Germanic but basically saying, among other things, that there is always deep-seated psychological trauma connected with a tumor.

He insists it is in the 3 years leading up to the diagnosis. But he is WRONG (although he remains helpful) because I have found that the real trauma often lies much earlier, often as child abuse, but something brings it to light in later life and that starts the 3-year process.

Then there is a great deal about what you need to DO in order to defuse these dangerous psychological triggers. Because—make no mistake—if you don’t address them, the disease probably WILL get you!

It’s also about mastering self-control, eliminating stress and working on the positive. I’ve covered it all, so you don’t need the detail here. But basically, your immune system will function better if you are in a calm, gentle place. Love or connectedness is about one of the most powerful healing mechanisms there is.

Then there is a terrific surprise entry—how to get to happy and relaxed by a completely unknown route.

My friend Norman Shealy MD, founder of the American Holistic Medical Association, has developed a wonderful healing and calming model, guaranteed to lower your stress levels.

New research is suggesting that oxytocin plays a crucial part in enabling us not just to forge and strengthen our social relations, but in helping us to stave off a number of psychological and physiological problems as well.

One of the nice things about oxytocin is that you can get your fix anywhere and at any time. All you need to do is simply hug someone, kiss or just shake their hand!

The simple act of bodily contact will cause your brain to release low levels of oxytocin—both in yourself and in the person you’re touching. It’s a near-instantaneous way to establish trust. And the good news is that the effect lingers afterward.

And you shouldn’t feel limited to people; it also helps to hug and play with animals.

You can take extra oxytocin as a spray. It works, but it doesn’t last. You need to take it four times a day. A better plan is to persuade your body to make its own oxytocin…

The Ring Of Air

This is where Norman Shealy’s marvelous improvement comes into its own. By stimulating the so-called “Ring Of Air”, we can get the body to release its own oxytocin. Originally this was researched using electrical acupuncture stimulation, but Norman’s even better idea is using a proprietary blend of essential oils, called Air Bliss.

It works from a roll-on applicator. The great thing about the applicator model is that you don’t have to be spot-on accurate. The result is relaxation and happiness, after about 30 minutes. Norm jokes he’s been asked, “Is this stuff legal?” and told “This has street value, Doc!”.

The acupuncture points to use are these, starting at the bottom and working up to the skull crown:

You can use a reference book to work out where these points are. Here’s a picture of Norman, on the rug, applying Air Bliss to a volunteer patient: 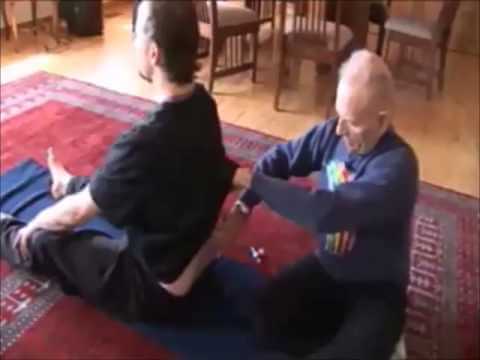 Oxytocin is known as a hormone for “forgetting one’s self”; it is also known as the “bliss hormone”. When you have plenty, life does indeed seem charmed and blessed.

Life events, which can lower or even block oxytocin include PTSD, depression, anxiety, childhood trauma and certain cases of autism.1

Oxytocin, not surprisingly then, helps relieve depression and anxiety. It naturally enhances a sense of:

These are very powerful feelings for sufferers with cancer.

Studies have also shown that a rise in oxytocin levels can relieve pain, which could be useful to some patients. The hard part is getting up your oxytocin levels while feeling the pain. That’s where sprays can help.

Best of all is Norman’s simple-to-use Air Bliss applied correctly.

Note: Air Bliss has been shown to raise levels of Neurotensin, too, for natural pain relief.

Cancer Is A Teaching Disease

Finally, you would be surprised on what cancer can teach us. This might seem a strange idea but for years I’ve been developing the idea that cancer will, one day, teach us a great deal about health and vitality. The most outstanding thing about cancer cells is their MASSIVE energy and growth. If only we could harness that power, Wow!

I like to point out that cancer is not some alien beast dropped into our bodies from a flying saucer. Cancer is YOU; it’s normal cells turned bad. If we can just persuade them to knock off the tom-foolery, they return to normal… and that’s the exact mechanism of so-called spontaneous recovery.

Finally, at the end of the book, I address this question…

If your cancer were whisked away magically (and completely) tomorrow, what changes would you bring into your life?

It’s a trick question, in a way. Because if you DON’T make significant changes, it could show up again. You need to look beyond the “bad luck” model and, having read this far and figured out many of the potential trigger factors you have been carrying around, you need to eradicate them. Create a whole new life, starting now…

The passive patient who says just, “The doctors have cured me. They told me there was no trace of cancer any more,” is playing with fire. Not to make changes is taking an enormous and unjustifiable risk.

That’s why you need this book…

Get yourself a copy today!