Here’s something both fascinating and creepy at the same time regarding cell phone dangers. Texting on your smartphone, it seems, will likely put you into a dream or trance-like state, according to new electroencephalogram recordings (EEGs).

Discovering a new EEG brainwave is pretty sensational anyway; it’s technology that’s been around for about a century!

But that’s exactly what happened at two academic medical centers, which highlighted what they first saw as EEG test abnormalities. Researchers at the Mayo Clinic in Jacksonville, Florida, and at Rush University in Illinois, saw that strange waveforms occurred when patients were texting, and only then. Patients were being electronically monitored, 24/7.

“We think active text messaging actually creates an electrophysiologic potential that’s unique to some type of personal electronic device,” said William Tatum, DO, of the Mayo Clinic in Jacksonville, Fla., who reported the findings during a press briefing at the American Epilepsy Society meeting.1

Tatum first detailed some of the cases at a neurophysiology meeting 2014, where Michael Stein, MD, of Rush University also presented similar findings. They pooled their updated results for the current study.

Video EEG monitoring is commonly used to diagnose epilepsy, and since it’s done over several days, patients carry on with their typical daily activities, which tend to involve smartphones. Some of them, naturally, used the phone to send texts in that time.

Evaluating data from 129 patients, researchers found that nearly a quarter of the population (24%) showed this strange “texting rhythm”, at 5 – 6 Hz (theta waves) on video EEG monitoring.

The waveform was highly specific to active texting and it didn’t occur with other activities such as voice calls, speech, or body movement. Nor was there any association with age, gender, epilepsy type, MRI results, or EEG lateralization, such as in patients with focal epileptic seizures.

Weird! Just to remind you quickly:

The wave pattern itself wasn’t entirely new, meaning it had been seen before. But the location and context were strange and this was definitely a new phenomenon. It’s not clear exactly why the pattern emerges only during texting, but might reflect some kind of brain reward system, researchers speculated.

“It could be some type of emotional property, be it the emotional context of interacting with someone in non-verbal communication, or some potential biomarker that might speak to a specificity important to industry, perhaps reflecting a heightened level of emotion that might be garnished in terms of identifying special skill set,” suggested the lead researcher William Tatum.

In English: communicating non-verbally but intently when the recipient is not physically present could be causing an unusual, even new, type of emotional arousal!

This would explain car crashes when people text: theta rhythms are those of trance and dreaming. Texting puts (some) people into a trance in which they are less aware of their surroundings. I think many legislative bodies have accepted that texting and driving are incompatible and passed laws to forbid it.

In 2011, in the USA alone, cell phones were involved with about 23% of traffic accidents. That’s 1.3 million crashes!

Hardly surprising. Studies show that texting is the longest eyes-off-the-road driving distraction of all and is 23 times (x23) more likely to land you in an accident than driving while intoxicated!

Despite this, 77% of young drivers are very or somewhat confident they can text and drive safely. 55% claim it’s easy to text and drive. Unfortunately, they are wrong. Monitoring shows that those who text and drive spend 10% of their time OUTSIDE THE MARKED TRAFFIC LANE!

Sadly, that translates into 11 teen deaths every day in the USA. Texting while driving has become the biggest cause of teen deaths here.2

What About The Others?

But there is another interesting question: Why did three-quarters of patients not have this waveform while texting?

And then there is another obvious question: Do these findings translate to people who don’t have epilepsy?

Researchers don’t know but they noted that the findings likely extend outside of those with epilepsy and likely occur in “normal” patients as well.

For all of us there is a degree of emotional fluctuation, including while texting. However, there were no differences in encountering the texting rhythm between younger patients—who could arguably be more emotionally variable–and older individuals.

What is for sure is that texting while driving is a very bad habit indeed and everyone should work at stamping it out. Vivien and I see this folly virtually every day, as we drive around in Las Vegas. It’s remarkable how often the texter is:

b) Driving too fast

c) Making what would be dangerous maneuvers, even with your eyes wide open and on the road ahead!

Don’t be a statistic. Don’t do it! A driving tragedy would wrecks someone’s Christmas.

In May 2013, the parents of college student Alexander Heit, 22, released a picture of the text message he was typing just moments before he was killed in a car crash. 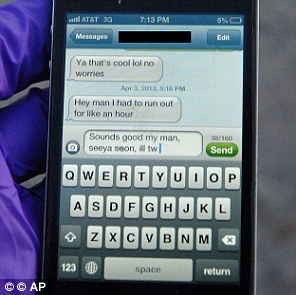 They hope the image will help prevent further deaths caused by drivers using mobile phones while behind the wheel.

His final text is cut off in mid-sentence, because he drifted into oncoming traffic before he could send it. Heit was responding to a friend by typing “Sounds good my man, seeya soon, ill tw…” before he crashed.

The parents of Alexander decided to release the image to try and prevent similar deaths from happening in the future.

“I can’t bear the thought of anyone else having to go through something like this,” his mother Sharon Heit said.

More on Brainwaves and Their Beneficial Effect

I’d like to finish up with some wonderful brainwave technology, if you haven’t encountered it. I call it multi-media sensory stimulation or MMSS for short.

We can fine tune brainwaves to give you better memory, lower blood pressure, less stress, more creativity, faster learning, enhanced sleep and a whole host of other positive health functions!

There’s a whole burgeoning science behind this and, as you would expect, I’m on it!

Watch a short video by me on this page and learn how to transform your brainwaves into the very BEST you can be for optimum health and performance.