Could a Chemical In Your Furniture Create Allergies?

Here’s a nice photo of Vivien and me, keeping company with a cute little koala, while we visited Featherdale Wildlife Park, on the outskirts of Sydney. 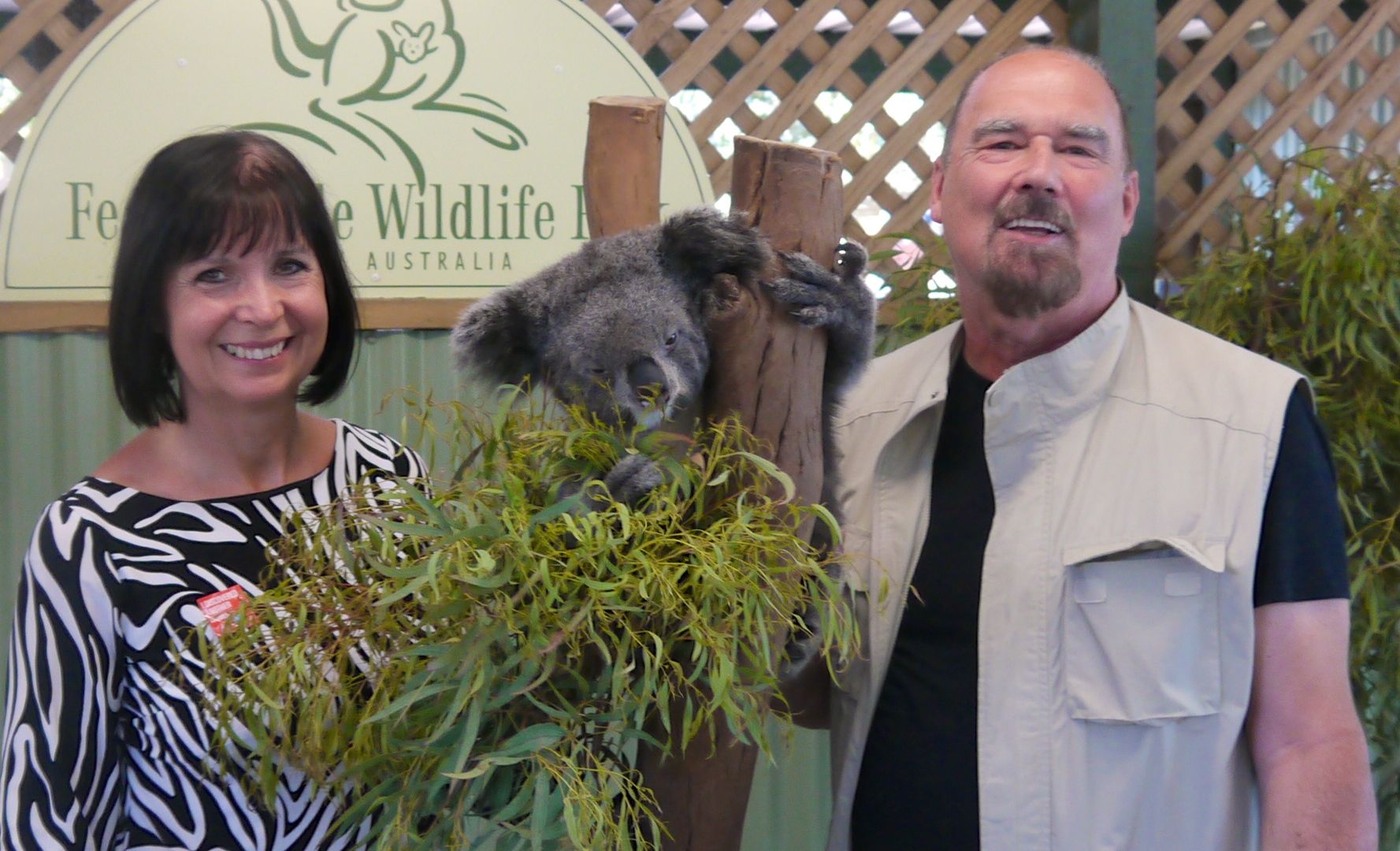 Vivien told me an interesting story on the journey out to the Blue Mountains, west of the city. Her friend Rosemary, a skilled psychic healer, had been called to the home of one of the famous Pink Floyd rock group (better not mention names)…

Apparently, following the import of some spectacular antique furniture into the home, one of the children had become very sick. Rosemary was consulted and she actually went to the musician’s house to stay, to figure out what was going on.

Rosemary “diagnosed” a bad energy—a ghost perhaps—in one of the pieces and advised it should be removed. This was done and the child recovered. You might think that was an open and shut case. I have always argued that the person gets to make the diagnosis who performs the cure.

By that I mean all the waffle and opinions of would-be experts stand for nothing against what the successful solution was based on. Rosemary solved the problem and therefore was probably correct in her assessment.

Well, that’s my own line of argument. But in this case I have an alternative suggestion: terpenes. This takes me back to my days as one of the world’s #1 class clinical ecologists (natural scientists).

Old wood could be moldy, perhaps. This could have been a mold allergy and removing the source of spores would effect a cure.

But more likely that molds—found in a seriously old resinous wood object—is a class of highly active compounds called terpenes.

There are a number of these biological compounds, produced by plants and based on simple organic molecules of the aliphatic and aromatic series, that give rise to characteristic odors, taste, attractiveness (or otherwise) to insects and so on. The potential number of terpenes is almost infinite; certainly there are more of them than of any other plant or animal product.

For those interested in their chemistry they are based mainly on a simple 5-carbon-5 unit called isoprene. 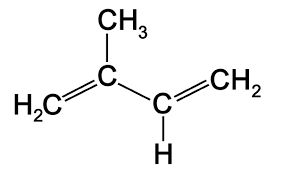 Monoterpenes have two ‘units’, there may be multiple chains of ‘units’, like cis-isoprene, the main constituent of rubber, shown here:

Chlorophyll, the green pigment in plants which helps convert sunlight to food, is also a terpenoid. Right away, you will see that terpenes are a large and very complex group of plant chemicals.

Terpenes are characteristically plant products and are well-known as components of many essential oils, such as camphor, rubber and carotene. But monoterpenes have been found in animals. Cholesterol is probably the best-known terpene.

Citronellol has been isolated from the scent glands of alligators. Some insects produce monoterpenes as part of their defense secretions. Some of these compounds are endocrine precursors in animals.

As I wrote in 1994 in my book of that year: A lot of fascinating biochemistry lies before us and research is continuing.

Now, here’s the cute link or a segue, as the disc jockeys like to say: the Blue Mountains we were visiting to the west of Sydney are blue because of terpenes in the air!

These ubiquitous (everywhere) chemicals are particularly prevalent in a hazy blue cloud above carboniferous forests.

You can see this effect on any mountain group, in fact, where there are hills clad with pine trees and other conifers. The very characteristic mountain misty haze we all know is due to these chemicals, hanging in the air, like gasoline exhaust on a hot, still day.

So if you are unlucky and get the sniffles when you visit mountainous areas, especially in summer, maybe a terpene allergy is your problem!

There is even a phenomenon of newsprint allergy we discovered back in the 1970s and 80s: people who sneeze when they open a fresh newspaper, or any other type of fresh, unused paper, for that matter. Paper is from wood, including conifers, and contains many terpenes, as well as more terpenes in the printing ink mixtures.

I used to soak The Times in saline for a week and take the resulting fluid and used it for intradermal testing, to verify this type of allergy.

[The more I look back on our small group, the more I think how brilliant we were].

Resins and special oils in plants, especially coniferous trees, are terpenous and can be severe allergens to certain individuals, as I have indicated. The production of leaf terpene is greatest up to and just before the time of flowering. It then drops off rapidly.

Here is another seasonal allergen, to complement molds and pollens…

Conifers, of course, are with us all year round so, even when growth is at a minimum, there is some exposure. It is believed that the typical blue haze over pine-covered mountains is due to the atmospheric terpenes they secrete.

Years ago I spotted that petrochemical products, which can be so troublesome to the allergically sensitive individual, all come ultimately from coniferous plants laid down some 200 million years ago. So there is little wonder that a reaction to ‘pine’ is quite common.

The petrochemical blizzard we suffer today is just another version of terpene sensitivity, with an inbuilt time-delay of around 200 million years! That explains a great deal.

If you have followed me thus far, you’ll probably begin to wonder, like me, whether the rock star’s child was not, in fact, just sensitive to terpenes that were coming from the old, resinous wood?

Maybe it wasn’t “bad energies” or a ghost?

Mind you, Rosemary is a brilliant healer and saved my second wife Vivien from a brain tumor, so that I could later meet her, fall in love and marry her! 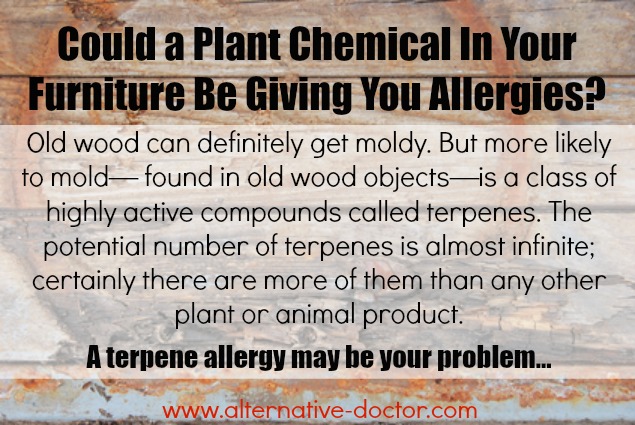 A Solution to Desensitization

Like a number of skilled doctors in this field, I can report successful results neutralizing patients to terpenes using the Miller serial dilution technique…

Flowers, leaves and other vegetable products are gathered and soaked with saline solution or Coca’s solution to extract the active chemicals. The resulting liquid overlying the materials is filtered, diluted and injected for testing in the usual way. The resulting therapeutic dose can also be used sublingually (under the tongue).

‘Pine terpene’, a mixture of conifers, is important because it is so common an allergen. ‘Grass’ terpene is also significant. Most allergy doctors are aware that patients often react to grass that has been cut, without pollens being present.

My former critic and colleague, the late Dr. Harry Morrow Brown of Derbyshire, UK, finally proved this scientifically to everyone’s satisfaction. Therefore, relying only on pollen extract for testing grass allergy may miss the true cause of the patient’s reaction.

Remember wheat is a grass and I don’t need to remind this readership of the tremendous negative health impact of wheat allergy and intolerance (and no, it’s NOT gluten allergy or anything to do with gluten allergy).

I should finish by saying not all terpenes are bad, though the explosion of “terpene supplements” being sold on today is, in my view, ignorant and silly.

The vast majority of terpenes are toxic, some very toxic, such as cannabinoids from marijuana, and to see advertisements for “terpene health bars” is just crazy.

Finally you can read about the antibiotic properties of terpenes in essential oils and herbal extracts, such as Cassia, lavender and Blackseed Oil, in my book on antibiotics substitutes: How To Survive In A World Without Antibiotics

The post Could a Chemical In Your Furniture Create Allergies? appeared first on Dr. Keith Scott-Mumby.