Could Acetaminophen be the Cause of ADD / ADHD and even Autism?

Earlier this year (20th Jan newsletter) I called your attention to the possible cause of ADD, ADHD and autism spectrum disorder as a result of acetaminophen (Tylenol in the USA; Paracetomol in the UK and elsewhere).

This is not a new idea. Evidence has been gathering. We all want to blame vaccinations; but is that valid? In the USA at least, acetaminophen comes almost part and parcel with vaccination: the child gets a shot, turns feverish, and is administered Tylenol. It’s not easy to separate the two.

One of the hardest pieces of evidence against vaccinations (or pollutants in the vaccine) being the cause of the problem is the case of Cuba. There, where vaccinations are compulsory, the vaccination uptake rate is over 95% (99.7% to be exact), yet autism is almost unknown, coming in at around 0.00168% of the population compared with an estimate of as high as 0.50% of the US population. That’s over 400 times higher than Cuba!

Note: What is highly significant is that, here in the USA doctors routinely advise acetominophen/paracetomol as a prophylactic for the fever that commonly accompanies vaccination, even up to five days beforehand! In fact some kids get their first autistic symptoms before vaccination!

In Cuba, the drug metamizole is most commonly prescribed for fever and NOT acetominophen/paracetomol.

I think the Andrew Wakefield scenario, of rogue measles virus causing ASD and other disorders after vaccination is still a potent theory and the most likely of all.

But we still have to explain the acetaminophen connection. We can’t just ignore it. That’s being as reckless and dishonest as the mainstream doctors and scientists!

In Jan of this year, I reported on a landmark paper, published in 2013, in The Journal Of Restorative Medicine by William Shaw, PhD, director of the Great Plains Laboratory, gathering evidence of a definitive link between acetominophen/paracetomol and autism in genetically susceptible children. (my underlining)

The abstract almost speaks for itself. Let me walk you through the key findings:

Toxicity of acetaminophen may cause autism by overloading the sulfation pathway, which is known to be deficient in autism, and leads to overproduction of the toxic metabolite N-acetyl-p-benzoquinone imine (NAPQI). Increased levels of NAPQI reduce the ability to detoxify a host of toxic chemicals in the environment, increasing oxidative stress, which leads to protein and lipid damage, and nucleic acid damage from free radicals.

We know for certain that children with autism (which I was treating successfully as early as 1982 with a holistic dietary and detox approach), are susceptible to toxic overload. So anything which clobbers the ability to detox will result in a rapid and nasty toxic accumulation in these kids (including mercury, where present, but not confined to it).

The marked increases in the incidences of autism, asthma, and attention deficit disorder in the United States coincide with the replacement of aspirin by acetaminophen in the 1980s.

Do bear in mind that association does not mean causation. But if you have a model which would explain the findings, then it becomes the current number one hypothesis, as in this case.

The characteristic loss of Purkinje cells in the brains of people with autism is consistent with depletion of brain glutathione due to excess acetaminophen usage, which leads to premature brain Purkinje cell death.

This is one of the characteristic effects of acetominophen/paracetomol. Glutathione is depleted with excess intake of any toxin. Roughly, it’s one molecule of glutathione lost, for every toxic molecule got rid of.

The anomalous hair mercury concentrations of children with autism are consistent with exposure of growing hair proteins to NAPQI derived from acetaminophen, which competitively inhibits the reaction of mercury with hair sulfhydryl groups.

This is why people think that mercury is involved. But as I said, kids without any mercury have autism. It’s not mercury, it’s the buildup of any toxins. Heavy metals (don’t forget lead causes severe brain damage) are just part of the picture. That’s why no statistical correlation is found. It’s not the problem, whatever out-of-date fact-shy theorists want to believe; it’s the result of the problem.

Aug 17, 2016, another study was published which adds to a list of reports that associate acetaminophen taken during pregnancy with children’s ADHD, autism symptoms, delayed language skills, and asthma. Acetaminophen has long been viewed as safe during pregnancy and is used by a large number of pregnant women in the U.S. and abroad; it may not be safe at all.

Once again, only an association was showed. It does not prove causation. But it’s really interesting, where this is leading.

So how do the drug pushers of orthodox medicine get round this ugly fact? Hal C. Lawrence, MD, the CEO and executive vice president of the American College of Obstetricians and Gynecologists, says that studies “show no clear evidence that proves a direct relationship between the prudent use of acetaminophen during any trimester and developmental issues in children.”

So anyone made sick, was it only the “imprudent” use of Tylenol?

Unfortunately ANY use of the drug may have now become imprudent. Researcher John Thompson, PhD, associate professor of pediatrics at the University of Auckland, says “evidence appears to be building” linking acetaminophen and behavior problems. In a 2014 study of 871 children, Thompson linked acetaminophen to ADHD symptoms in children ages 7 and 11.

In the usual double-speak, Thompson says more study is still needed. But “the results are consistent,” he admits.

Here’s What Some of the Studies Showed

In the most recent study, researchers looked at data from nearly 7,800 mothers.

They asked mothers about their acetaminophen use at 18 and 32 weeks during their pregnancies, and again when their children were 5 years old. At 18 weeks, more than half the mothers reported using acetaminophen; about 40% reported its use by week 32.

Incidentally, the fathers also reported their acetaminophen use in the study and the father’s use of the drug was not linked with increased risks of behavioral issues; nor was the mothers’ use after giving birth. Both of these observations strengthen the apparent link between acetaminophen and autism and behavioral disorders, the researchers say, and makes it highly likely that the risk cannot be explained by other factors.

It’s not a very strong link. But it is a link. The association between cigarette smoking and lung cancer was not strong at first.

And the new study was not a full-on investigation really. The results are therefore fairly ominous. “I would say we have evidence [acetaminophen use] is linked to behavioral difficulties,” says Evie Stergiakouli, PhD, a lecturer in genetic epidemiology at the University of Bristol in the U.K. and leader of the recent study.

Of course (predictably) the Consumer Healthcare Products Association (CHPA), which represents manufacturers and marketers of over-the-counter medicines, pointed out that ”the study has many limitations” and found only associations.

McNeil Consumer Healthcare, the maker of Tylenol, also issued a statement noting that no studies have “definitively” proved that taking acetaminophen while pregnant causes developmental problems in children.

Don’t expect them to show concern and go against the use of acetaminophen, just to cautiously reduce the possible harm to unborn babies… Lord no!

Here’s a Summary of Research to Date

Children whose mothers took acetaminophen during pregnancy were about 1.3 times more likely to be taking ADHD (attention deficit hyperactivity disorder) medications or have ADHD-like behaviors at age 7. 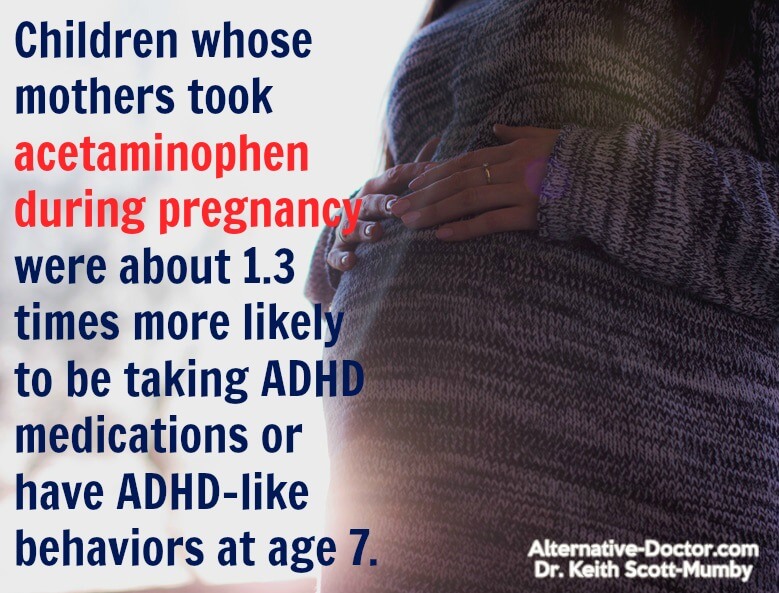 Children born to women who had taken acetaminophen during pregnancy were about 1.4 times more likely to have hyperactivity and impulsivity symptoms than those whose mothers did not, according to Spanish researchers who followed more than 2,600 mother-child pairs for 5 years. They also found the boys had more symptoms of autism if their mothers took acetaminophen during pregnancy. The study did look at frequency of acetaminophen use and found higher risk with more use.

A study released this year of more than 53,000 children in Norway showed a link between acetaminophen use in pregnancy and childhood asthma. Study authors found acetaminophen use for colds, flu, fever, and pain in pregnancy all showed a “modest association” with asthma in 3- and 7-year-olds. But the study found untreated pain was also associated with an increase in asthma.

All those studies relied on women to report their acetaminophen use.

“The data seem to at least point to a correlation or link,” says Rebecca Hoover, PharmD, assistant professor of pharmacy at Idaho State University, who led the study about ADHD behaviors at age 7. Then adds: “I think there is not enough evidence there to change practice. … I would no longer say it’s 100% safe, but nothing is 100% safe.”

How To Treat Pain and Fever Naturally and Safely, WITHOUT MEDS. 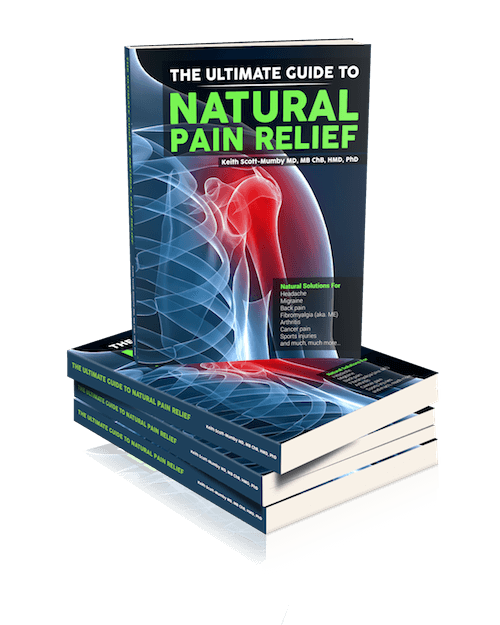 I wrote you a whole book on this, called The Ultimate Guide To Natural Pain Relief. It covers some amazingly effective nature-based remedies for pain. You’ll be very surprised.

It should be required reading for everyone including all medical students, nurses and doctors. It describes a ton of alternative pain relief strategies that are gentle, effective and result in real and lasting healing, not a few hours relief only until the next dose!

Ignorance is no longer an option.

Go here to learn more about the book.

The post Could Acetaminophen be the Cause of ADD / ADHD and even Autism? appeared first on Alternative Doctor Dev Site.