Could The Holistic Doctors Murdered Be Linked?

Unless you live on the Planet Zod (so remote you’re off the air) you would have been aware of the rash of news reports about mysterious deaths among holistic doctors. On the face of it, these are way too many to be just a coincidence.

But there’s more mystery. Most died very violently, definitely NOT of natural causes. The first of the holistic doctors murdered, Dr. James Jeffrey Bradstreet (well known for his work and research on Autism) was found dead in a river in North Carolina, with a gunshot would to his chest. Bradstreet, 61, was subject to a Food and Drug Administration (FDA) raid shortly before his death, which police said appeared to be suicide.

Suicide? I thought they shot themselves in the head, not the chest? And where was the gun; whose gun was it?

The creepy idea began to form in peoples’ minds that maybe the FDA had done a take down, “terminate with extreme prejudice” as the British military expression goes. The term “suicided” began to creep into reports.

Americans are just nuts at inventing weird and crazy-sounding words. Suicided? It may be shorthand but I’d still rather choke over the syllables and say murder disguised as suicide; it’s something to do with my love of words… I don’t like to see “GMO words” (perverted and twisted). The natural ones have been good enough for all my life!

Anyway, while the scare was at its height, a total of eight medical/holistic/alternative doctors were found dead in June and July alone. At least four of these deaths are being treated as homicides. These deaths have perplexed and rattled people, especially those in the alternative medicine community, and everyone is wondering what exactly is going on. Are these deaths linked?

I mean if there is a plot to eliminate trouble-causing doctors, should I go into hiding?

Mainstream media, typically, didn’t pick up on the story and there are lots of questions that need answers. Authorities are still investigating and slowly providing details.

A short timeline of events is as follows:

Although the timing and similarity of these deaths could be coincidental, authorities did not rule out a possible link, particularly considering five of the eight were found in Florida. These doctors have left behind family, friends, and patients who trusted and respected them.

Well the holistic community was quick to link these deaths. Maybe Big Pharma had at last shown its Nazi teeth bared and gone back to the “long knives” methods of Hitler and the Third Reich? Let’s just say that, for me, it was not beyond the bounds of possibility.

A 9 July 2015 article in the Daily Beast profiled their case and gave no indication that the individuals affected were in any way affiliated with alternative medicine or were on the radar of the FDA. In fact, there are no clear parallels between the deceased “holistic health doctors” included in the conspiracy theory and the missing Mexican doctors, according to Snopes.com. Still, it sent creepy shivers down my spine.

What’s going on? Is there a conspiracy? 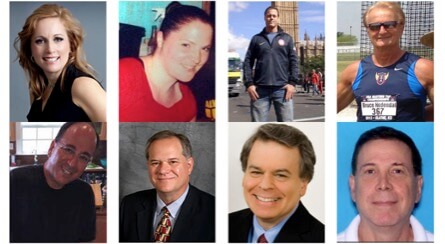 Gallery of the deceased

The Case of Gonzalez

I think the case of Nicholas Gonzalez could reasonably be taken off the list. He was the man—if you are trying to remember—who followed up Donald Kelley’s work with enzymes in the treatment of pancreatic cancer. He got quite remarkable results; some of his patients were alive after 2, 3, 5 years. That’s almost unheard of. But then the dead-beat orthodox doctors started to muddy up the waters, deliberately torpedoing a major scientific study with him involved (they sent patients who were not screened properly or that did not meet requirements, or were too far gone), to make sure his method was discredited.

So we got Gemcitabine instead, which costs $330,000 for a four-month course and gives on average… wait for it: just 3 months of extra life.

Gonzalez will be missed. But was he “suicided”? Apparently not. His office sent out a notification:

“The cause of death was cardiac related, it appears, as he suddenly collapsed and was unable to be revived. Dr. Gonzalez was in excellent health otherwise so his passing is quite unexpected.”

Call me cynical but was that just to quickly say, “it wasn’t cancer”?

Jeffrey Whiteside MD, according to his family, just “walked away” and for weeks he was missing. Then suddenly authorities announced they had Jeffrey Whiteside’s body and a that a .22 caliber gun was found nearby.

On 29 June 2015, Theresa Sievers MD was bludgeoned to death in her Florida home. An investigation into her murder remains open, and law enforcement officials have declined to comment on what they’ve found so far. But there was no evidence suggesting Sievers had an adversarial relationship with the FDA or any other large, powerful public health agencies before she was brutally murdered, and whoever killed her left a remarkable amount of evidence, which is not congruent with a calculated corporate hit.

Lisa M. Riley, 34, was a Doctor of Osteopathic Medicine and not an MD, but her field of practice was listed as the decidedly uncontroversial “emergency medicine.” She seems too orthodox to enrage the Big Pharma establishment.

It’s true that Riley’s death occurred under exceptionally suspicious circumstances. She was found dead of a gunshot wound by her husband in her home on 10 July 2015, and ten days later the Georgia Bureau of Investigation (GBI) announced that Riley’s husband, Yathomas Riley, would be charged in connection with her death. He seems a likely suspect, after having narrowly escaped a charge of attempted murder of a previous girlfriend.

(What is it with some of these American guys? Why can’t they just leave home, instead blasting their women to death?)

Later articles also tied the death of Dr. Ronald Schwartz, 65, to the conspiracy. Schwartz was found shot to death in his Jupiter, Florida, home on 19 July 2015, but the deceased was neither an alternative health practitioner nor embroiled in any controversy at the time of his apparent murder. He was an ObGyn, licensed in Tennessee and Georgia (not Florida).

Bruce Hedendal had served prison time for federal tax evasion, and had been forced to pay nearly three quarters of a million dollars in restitution. But this was about ten years ago, and doesn’t seem to have anything to do with his death – though the stress of prison time and a massive fine certainly can’t be good for one’s heart.

Suddenly it isn’t looking much like a conspiracy. But a coincidence? Well, yes. Look at the math:

According to Snopes.com, as of March 2015, there was an estimated range of around 900,000 to just over 1,000,000 doctors in the United States. Going by those numbers alone, between 6,500 and 8,200 medical doctors will statistically die of myriad causes in any given year (including violent death).

Each month approximately 700 doctors would die (based upon the number of American doctors and the number of overall deaths). Thirteen of them could be expected to live in Florida. As such, six to eight deaths over the space of a few weeks is well within the realm of expected doctor deaths.

The deceased are NOT all holistic doctors. An osteopath can be considered a holistic doctor, but is still a physician licensed to practice medicine. And while chiropractic is certainly in the alternative medicine spectrum, it’s not exactly a profession that Big Pharma is looking to rub out on a regular basis. There are over 44,000 chiropractors in the US, and it’s not even close to an outlier for two to die around the same time of natural causes.

I’m just a thorn in their side, so I don’t think they could justify killing me! Still… if I suddenly disappear, you know what happened?

The post Could The Holistic Doctors Murdered Be Linked? appeared first on Dr. Keith Scott-Mumby.