Dealing with Loneliness Is Just As Toxic As Smoking and Obesity

Those who read my intimate and philosophical writings (www.supernoetics.com) will know that I give special emphasis to LOVE (vitamin L). Love is not just something to give and get but love is who or what we are.

The sense of togetherness and belonging, being valued and appreciated, is crucial to our wellbeing.

Put another way, loneliness is pathological. And that’s exactly what science shows.

I’m not talking about elderly and isolated people, or those who society finds repellant. I mean anyone can be lonely, even in the middle of crowds, and it’s really sickening. Loneliness is a public health disaster, linked to a slew of chronic illnesses.

Humans were not designed to be solitary creatures. We evolved to survive in tribes; the need to interact is deeply ingrained in our genetic code. So much so, says John Cacioppo, the director of the University of Chicago’s Center for Cognitive and Social Neuroscience and author of Loneliness: Human Nature and the Need for Social Connection (W. W. Norton & Co., 2009), that the absence of social connection triggers the same, primal alarm bells as hunger, thirst and physical pain.

Cacioppo has conducted dozens of studies and meta-analyses on how dealing with loneliness affects the mind and body. It’s a bigger problem than you might think.

In the UK, for example, the Co-op and the British Red Cross found that more than 9 million adults are always or often lonely. The percentage of Americans who responded that they regularly or frequently felt lonely was between 11% and 20% in the 1970s and 1980s [the percentage varied depending on the study].

In 2010, the American Association of Retired Persons (AARP) did a nationally representative study in 2010 and found it was closer to 40% to 45%. And a recent study done on older adults out of University of California – San Francisco put it at 43%.

And yet we barely talk about it.

Why Don’t We Talk About Dealing with Loneliness & How Lonely We Are?

It is not hard to find plausible reasons. More people live alone, and the number of single-parent households is rising. Education and work mean that many of us live far away from our families. Marriages and relationships break down and it seems many hopefuls just give up.

At the same time, technology has changed the way we work, shop, socialize and entertain ourselves, largely serving to reduce the amount of face-to-face contact we get. People seem to spend more time interacting with their electronic “toys” than with fellow humans!

This adds up to an epidemic of loneliness. Yes, epidemic, since chronic loneliness is very damaging to people’s mental and physical well-being. As a public health problem dealing with loneliness is up there with smoking and obesity, yet it hardly registers in the public mind. Doctors too are mostly ignorant of the weight of this phenomenon.

I introduced it in my mastermind book “Get Healthy For Your Next 100 Years” (happily now re-issued under the title “How To Live Beyond 100 Years”), as one of the major causes of early death. 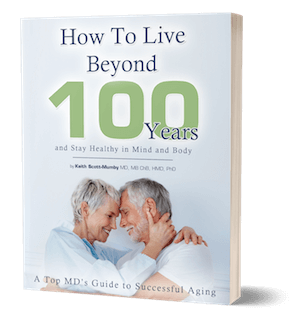 The sense of belonging is so precious to us that if we do feel alone, we tend to die early. Companionship keeps you alive!

In a 19-year study, women who reported feeling lonely most of the time had a 76 percent increased risk of heart disease. Chronic loneliness, like stress, may trigger inflammatory and hormonal changes that promote cardiovascular disease.

It could also be, of course, that people living alone don’t look after themselves properly, eating poorly and not taking enough care of personal health issues.

Either way, there is a new term, “emotional longevity,” coined by Norman B. Anderson, Ph.D., the CEO of the American Psychological Association, and the author of the book titled, Emotional Longevity: What Really Determines How Long You Live.

One of the strongest contexts for getting and receiving warmth and support is marriage. More than 100 years of research finds that a sound marriage is good for your health. Married people live longer and have fewer chronic diseases than do single, widowed, or divorced people.

Divorced people live somewhat longer than unmarried people but less than those who remain firmly married. So, one may jokingly quote the poet Tennyson: “Tis better to have loved and lost than never to have loved at all”!

Something Has To Be Done

If anything, the trends driving increased loneliness have become even more apparent, and our scientific understanding of its impact has become much clearer. We also know how to intervene, quite easily and cheaply. Curing loneliness might just be the most cost effective public health intervention available.

There are answers. They just need implementing.

There may not be much we can do about social trends driving the epidemic, but our collective denial of it definitely needs to change. There are welcome signs that this is happening.

Before she was murdered in 2016, British MP Jo Cox was working to create a national commission on loneliness. That has now been realized posthumously, bringing together MPs and various campaigns to raise awareness.

In her maiden speech to the UK House of Commons in 2015, Cox famously said “we have far more in common with each other than things that divide us”.

Yet the archetype persists of old, odd and infirm people being the “lonely ones” and that it is something that does not affect the rest of us.

Prepare for a shock then: 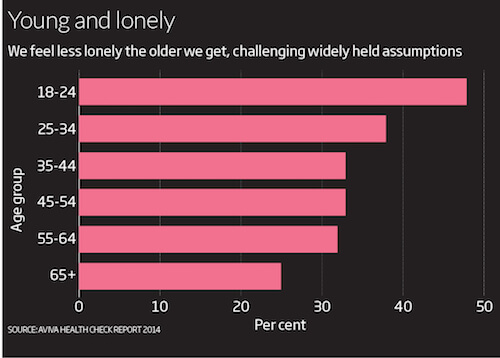 Why does it affect young people more? According to John Cacioppo, we all need different amounts of social contact. It is this, rather than the objective amount of social contact we have, that determines how prone we are to emotional isolation.

The environment plays a large role too. Some people, such as teenagers and those with certain mental health problems, may be especially prone to dealing with loneliness because they can tend to misread social cues.

Trawling FaceBook, as youngsters do, might make them feel connected, you would think. But actually the opposite effect is likely: a young surfer rambling through FB pages might feel left out from all those exciting “other lives” they are seeing.

Dealing with Loneliness Is Bad For Our Health

A meta-analysis of nearly 150 studies found that a poor quality of social relationships had the same negative effect on risk of death as smoking, alcohol and other well-known factors such as inactivity and obesity. Correcting for demographic factors, loneliness increases the odds of early mortality by 26 per cent. That’s about the same as living with chronic obesity.1

One apparent reason is that loneliness lowers willpower, so we are more likely to indulge in self-defeating behavior. We may take risks and make bad decisions – from choosing unhealthy food, to avoiding exercise. Feeling socially isolated also increases the risk of mental health problems such as anxiety, stress, depression and eating disorders, all of which can have a knock-on effect on our physical health.

We’re just beginning to understand what serious consequences that can have. Loneliness changes the brain, taking hold of our thoughts and behaviors in ways that are likely to make us feel even more isolated. But its effects are not just psychological; they are also physical. Left unchecked, loneliness can have a physiological impact as detrimental to longevity as smoking or obesity. 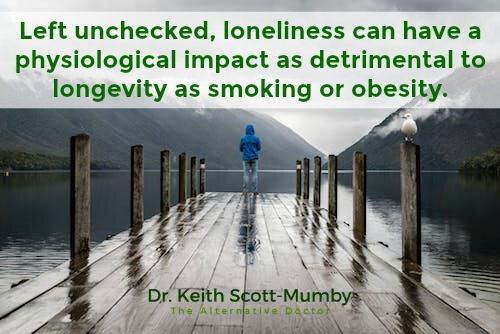 Researchers at the Aarhus Sygehus University Hospital in Aarhus, Denmark (“the happiest city in the world”), tracked over 138,000 people. Men above the age of 50, and women above 60, who lived alone were particularly at risk. Despite constituting just 8% of the whole study population, these groups accounted for more than 96% of all deaths within a month of a positive diagnosis!

The Statistics on Loneliness:

If you want to draw closer and find some people who also need companionship, I’m proposing a webinar on this topic. LONELINESS AND HOW TO BEAT IT.

There are answers. Some are surprisingly simple. I’ll share with you everything I know.

Listen to my latest teleconference on loneliness here. (Note: Scroll down, it’s at the bottom of the page.)

The post Dealing with Loneliness Is Just As Toxic As Smoking and Obesity appeared first on Dr. Keith Scott-Mumby.