Death Is The Final Healing Of Life

“I’m not afraid of death; I just don’t want to be there when it happens.”  —Woody Allan, Comedian

When your Mum passes, it’s a special event in life. Gosh, even if you don’t happen to like her, you can’t get away from the fact that she is your mother; she made you. Did you know that all your mitochondrial DNA comes from your mother, none from your father (unlike your chromosome DNA, of course)? Nature considers a mother something special.

I stepped through that particular doorway in the last few hours. I am now bereft of the one who made me. She was only 93 years old!

We didn’t always get on well. But in the latter part of her life she was immensely proud of me and my achievements. And in time, I became proud of her. She turned out to be a really good dance teacher in her 60s. She also learned to paint in her later years (70 plus!). She sold more paintings than Van Gogh did in his lifetime!

Suddenly, she’s not there. Here’s a picture of me with her, in the famous “Lost Gardens of Heligan”, near St Austell in Cornwall, England (now found again, naturally!) 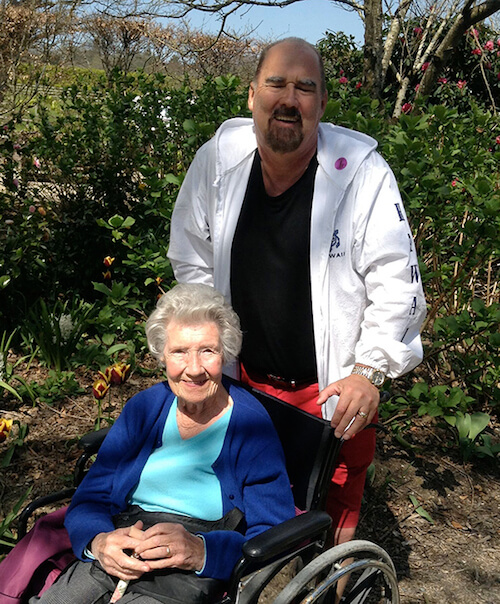 Florence Scott had quite a life. As a city girl in her late teens she went to work in the “Land Army” (female agricultural assistants dressed like soldiers), which Britain created during WW2.

There she met a dashing young farm hand and they were wed. But Mum didn’t have a happy maternity history: 2 miscarriages, a stillbirth (awful for a woman) and my eldest brother Michael died of meningitis less than 2 years old. Flo was heartbroken.

Given the context then, you can understand the horror, which arose when I too nearly died at the age of just 6 months or so. She loved to tell the story of her and my father dashing across the fields with a pony and cart (no cars in the village in those days), to get me to the hospital while there was still time. “They said you only had an hour or less to live,” she would tell anyone who listened. I had contracted a volvulus (gangrenous bowel) and this was in the days before antibiotics.

Well I survived. I’ve been minus several feet of intestine since—nobody knows exactly how much the surgeons had to cut out. Seven years later I was successfully joined by a sister, Judith.

For such a humble lass with no schooling, Flo did very well: a son who is an internationally-renowned doctor, writer and philosopher, plus a daughter who is also internationally-known as a music conductor, having performed in many parts of the world.

Mum had reason to be proud and she made it plain she was. I was the first Mumby to ever go to a university, among all the generations in our tribe… and Judith was the second.

Lessons at The Last

I was glad to share a few wonderful days with her before she passed. Last week we went for afternoon tea in Penzance—she dozed a little, while I walked along the coast a while. I drove her home. It was a lovely day out; something from Proust. It’s a grand memory to remember her by.

That same evening Flo received some shocking news. Her second husband (they were by now divorced) was dying horribly in hospital, his face mutilated with pointless surgery and he was expected to die within a day or two, at most. He desperately wanted to connect with her; he wanted to ask forgiveness; he wanted to say “I love you,” one last time.

The news visibly shocked her and it was all-downhill from that moment. She could not eat the nice supper I had prepared. She never ate properly again. Next day I had to ask my sister, who was taking a break from being a care-giver, to come home. Mum was refusing to eat, she was dehydrated and weak.

I did manage to make the phone call her ex-husband had wanted. I had to keep insisting to Mum that she tell him he was forgiven. There was a pleading, almost a desperation in his voice; it clearly meant very much to him in his hour of extremis.

Thankfully, Mum said over and over “I forgive you,” and “I love you.” He in turn forgave her anything and everything and kept saying, almost inaudibly because of his poor facial structure, “I love you.” The room was electric with emotion.

Never in my wildest dreams did I guess that, at that moment, we were starting one of those he-dies, she-dies scenarios.

But that seems to be the story. By that same evening Mum was vomiting and dehydrated; she had to be hospitalized for fluids and nutrition. That was on the Friday. I still didn’t see it coming. On Saturday morning I felt she was in good hands and would probably be sent home later that day. I bade farewell… I had to start my journey back, to London and thence on Monday morning, back to the USA.

I joked with her she’d be OK and got her laughing by saying, “You’re not actually on the danger list,” (true)… “You’re on the nuisance list!” I kissed her goodbye for what became the last time.

On the Sunday, I had news she had rallied a little and asked for a cup of tea. I was heartened by this. I decided to fly. I could always return if needed, though I find long distance travel increasingly stressful these days (I have started to use the term: “travel shock”).

But it was a miscalculation. When I reached Las Vegas, my sister phoned to say Mum had been briefly lucid, was still having her IV drip, and more treatment was planned. We were all a bit non-plussed when Flo suddenly left this earth and started her final journey.

So often married couples follow each other quickly, one after the other. 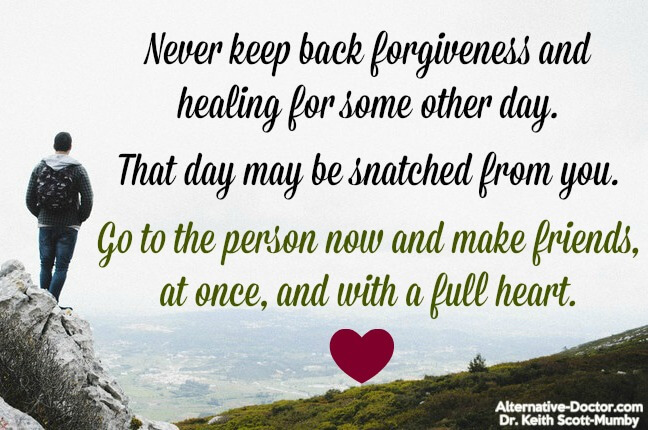 Why am I telling you all this in intimate family detail? Because death is an important part of life. In the book Love, Medicine and Miracles, Bernie Siegel even wrote: “Death is a form of healing.” There are keen lessons here and I ask you to heed them:

Few people know the story of this lovely song: it’s disguised as a love song to a girl and works as that. But it was actually written for David Gates’ deceased father and if you re-listen to it with that in mind, you’ll hear it’s a great song to a dead parent!

So Mum passed with very little stress and no visible fear. I am pleased about that. She had an abundance of talents. I have my memories. She was frail by the end. She never lost her faculties, which I’m thankful for. But all her friends had died—birthday parties had become so sparsely attended, my sister stopped throwing them!

Now, let’s finish up with a few old-age quotes for dealing with death:

Everyone desires to live long. But no one would be old. —Jonathan Swift, Irish wit and writer 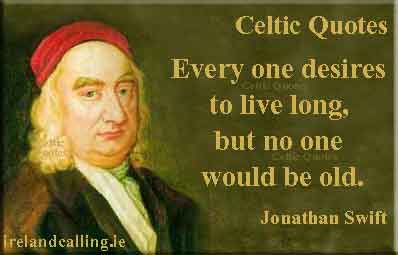 “Old age isn’t so bad, especially when you consider the alternative!”—Maurice Chevalier, singer

And finally, Oliver Wendell Homes: “Many people die with their music still in them. Why is this so? Too often it is because they are always getting ready to live. Before they know it, time runs out.”

My Mother found her song and sang it long and lustily! Rest in peace…

The post Death Is The Final Healing Of Life appeared first on Dr. Keith Scott-Mumby.