Vitamin C, we know, does some pretty cool stuff, apart from just preventing scurvy. A new study finds a link between low vitamin C in the blood and increased risk for intracerebral hemorrhage (stroke).

That’s not surprising, because we know that scurvy is characterized by spontaneous bleeding, especially from the gums (if you get blood on your toothbrush, up your intake of vitamin C and don’t forget the brushing with coconut oil from this issue…). Vitamin C is vital in the manufacture of collagen, which is turn helps support blood vessels and tissues.

In fact, this effect may be the real reason that fruits and veggies protect against stroke, rather than the antioxidant content (or perhaps both).

But there is an extra layer to this: vitamin C helps reduce blood pressure significantly. Of course high blood pressure increases the risk of a “blow out”, so it makes sense. I should explain there are two reasons for a stroke: clots, which damage brain tissue, but also bleeds, which rip up brain tissue.

So a team at Pontchaillou University Hospital, Rennes, France, decided to look into this (ah, how I love Normandy! Vivien and I were in Rennes only last year).

This was a prospective case–control study (always much stronger than retrospective studies) and included 135 participants, of which 41% had a normal vitamin C status, 45% showed some depletion, and 14% were deficient.

65 cases had had a cerebral hemorrhage episode and these were in the significantly low vitamin C patients.

The team also noticed something interesting, which is that older patients tended to have their pathology in the brain cortex or lobes, while the (relatively) younger participants had more of the deep bleeding. 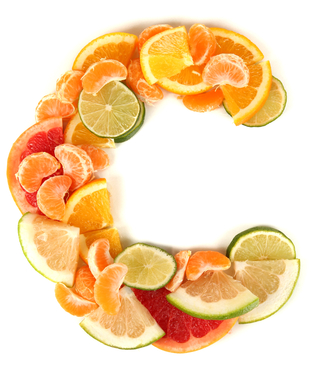 There are two clear messages I’m sharing with you here. Take lots of vitamin C, because it will help keep your vasculature in good order. But it also helps with the manufacture of collagen and we need as much collagen as possible to beat off wrinkles!

Us Boomers are fighting wrinkles and vitamin C depletion is the last thing we need. Wrinkles occur when there is too little collagen support for the skin, so it begins to sag.

For tons more good stuff on beating wrinkles, in fact beating aging and living “forever young”, get my comprehensive guide: How to Live Beyond 100 Years!

For Those Of You Who Think Vaccines Don’t Work

There are some vile and ignorant people loose on the Internet. I see lots of nasty onslaughts against Louis Pasteur, as if what he invented was a criminal hoax and doesn’t work anyway (everybody copies everybody’s else’s vitriol and disinformation).

So when you hear the medically-untrained critics pronounce that vaccination doesn’t work, you are listening to ignorance and stupidity.

There are some vaccines which are a waste of time and some products from the USA that are toxic filth. It’s an evil, greedy racket. To say therefore “vaccination doesn’t work” is tossing out the baby with the bathwater.

The problem, medically, is to try and estimate the for-and-against risks. I would ALWAYS advocate rabies vaccine, for someone who has been bitten, because death is virtually certain if you get the disease. I would NEVER recommend ‘flu vaccine, because it is pretty ineffective and death-if-you-don’t is very unlikely, in a person with a good immune system.

Now look at some new research showing conclusively that the idea of a small safe inoculum is effective at preventing infection. The immune system is primed and ready to blast off, when the pathogens show up. Bam!

It’s all over quickly. Without that initial forewarning, the immune system may take about a week or even more to mount a response. The patient could die in that time.

Homeopathy, by the way, is just a logical use of the vaccination principle: a little dose will help the body mount the big offensive. Homeopathy is far safer than the toxic junk put out by firms like Baxter.

This is also, really, an interesting social experiment. Researchers tried the idea of vaccinating mice against the cause of Lyme disease; a bacterial spirochete called Borrelia bugdoferi (I know, I know, but the guy who discovered it was named Willy Bugdorfer!)

You probably know that deer ticks are where humans pick up the infection. But apparently mice are the chief reservoir and they infect the ticks!

So the idea of inoculating mice made sense. The researchers marked out plots and fed the mice on some of the plots an oatbran laced with antigen and on control plots, bran with nothing added.

After 5 years, the reservoir of Borellia bugdorferi in ticks had dropped by a significant 76%.

That’s impressive! An obvious course of action suggests itself: treat as many mice as you can. It should help reduce the incidence of Lyme. But then, who wants to go round feeding vermin?

And, no, the trial was not sponsored by Quaker Oats!

Finally, let me remind you again that I have decided to re-start the Sunday Meeting, a live FREE telephone teleclass. Please join me for a spiritual half hour, discussing some aspects of conscious life, this coming Sunday.

This is not religious, not denominational, but it is top level stuff: life, the Cosmos, Being, meaning and love! I’ll be talking science and reason, not “scriptures”. Why certain things make sense; not something you are obligated to do.

I’ll open for questions afterwards but the discourse will only be a half hour. Anyone can spare a half hour to remind themselves that it all has a bigger meaning than just work and paying the bills!

To be, to exist at all, is a glorious privilege. I want to explore with you how we can get more out of our experience here on Earth!

At first it will be just here in the USA, because of time zone problems. But be patient; we will get it all set up for everyone who wants to join in.