You know that making smart food choices are an important part of nutrition. You literally are what you eat. Someone whose diet consists of fast food and soft drinks can’t expect their body to be as healthy and in balance as a person that eats organic foods and avoids the junk.

The same holds true for medicine. Over the last fifty years, many miraculous discoveries have been made by science and untold numbers of lives have been saved. We now consume tons of medications and supplements every day. As a whole, we’re still dying younger.

What if there was a way to combine the principles of eating healthy and the therapeutic effects of many medicines all without swallowing a single pill?

Medicinal Mushrooms and Your Health

There is such a way thanks to the benefits of medicinal mushrooms. Now these aren’t the toadstools growing in the damp part of your garden or the “magic” mushrooms your uncle took back in college. 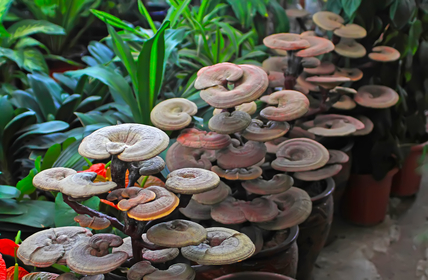 You might have these natural, tasty medicines in your refrigerator right now!

Cordyceps are a wild Chinese mushroom that has been used for thousands of years by herbalists. Naturally growing on the larvae of caterpillars and other insects, recent scientific testing discovered that cordyceps mushrooms contain antioxidants that both inhibit the division of cancerous cells and prevent the formation of new cells.

The first record of cordyceps mushrooms is in a two-thousand-year-old Chinese medical text; however, they’ve been in the news recently. In 1993, two Chinese women shattered five world-running records while taking cordyceps. The US sponsored Team Postal also consumed them en route to their record seven Tour de France victories.

Legends say that a mushroom sprouts wherever the milk of a tigress falls to the ground. Despite the fanciful origins of this fungi’s name, the tiger milk mushroom’s benefits are firmly rooted in reality.

A native species of Malaysia, they are fat-free, low calorie, and contain many essential vitamins and nutrients. In addition, tiger milk mushrooms have been found to have high levels of betaglucan, a compound shown to boost the body’s immune system and aid in the prevention of cancer cells.

“Maitake” is a Japanese word for “dancing mushroom.” At one time, their value was so great that they were worth their weight in silver. Maitake mushrooms may not dance for you but they have many wonderful health benefits.

They are filled with immune-boosting polysaccharides and polysaccharides protein complexes used by your body to fight off invading diseases such as cancer. They also help regulate blood sugar and blood lipid levels, reducing insulin resistance in Type 2 diabetics. Maitake mushrooms have proven beneficial in lowering blood pressure. 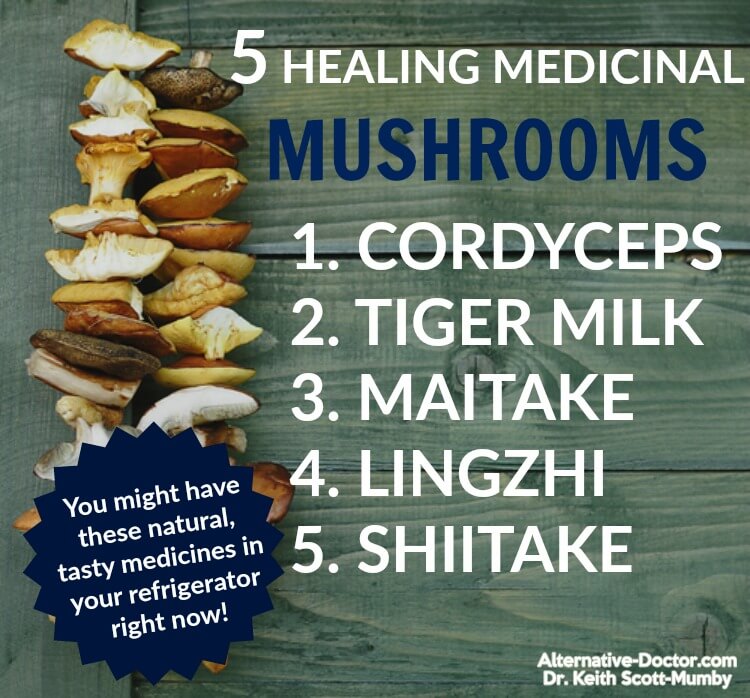 Also known as the “Red Reishi Mushroom,” lingzhi mushrooms were once called “the medicine of kings” and “the mushroom of immortality.” Used as a natural remedy for centuries, western science has recently rediscovered this ancient phenomenon.

During a controlled study, patients with high blood pressure who consumed an extract of lingzhi mushrooms experienced a significant drop compared to individuals not taking the extract.

Rheumatoid arthritis sufferers can experience relief thanks to a polysaccharides peptide in lingzhi mushrooms that will help protect their joints.

When combined with green tea, lingzhi mushrooms have been proven to slow the growth of sarcoma, a cancer of certain types of tissues.

Most people are familiar with shiitake mushrooms. However, aside from being delicious, there are many benefits of this popular medicinal mushroom.

Shiitake mushrooms contain lentinan, a compound proven to strengthen your immune system and help your body fight off diseases from the common flu to HIV.

Lentinan is also an antioxidant and can defend your body against cancer as well as prevent existing cancer cells from spreading.

The high iron content of shiitake mushrooms combats anemia due to pregnancy or menstruation, improves the circulation of oxygen throughout your body, prevents fatigue, and boosts your energy levels.

Low in calories but full of flavor, shitake mushrooms are loaded with dietary fiber, which slows your body’s digestion helping you feel full for a longer period after you’ve eaten.

You’ve probably been eating mushrooms for years, whether in a salad or on the occasional slice of pizza. With your new knowledge of the health benefits of medicinal mushrooms, perhaps you’ll make them a regular part of your diet.

Just avoid the magic ones belonging to your uncle.