Does Aluminum Raise Your Risk of Alzheimer’s Disease?

Do you know your personal risk of Alzheimer’s disease?

This condition is more than a touch of occasional forgetfulness that is often a benchmark of getting older. It is a serious, debilitating neurodegenerative disease caused by atrophy of the brain tissue and the buildup of plaques known as amyloid fibrils.

A Disease that Steals “You” Away

I want to talk to you about the most prevalent form of dementia diagnosed worldwide. It affects the areas of your brain that control language, comprehension, memory, judgment, and basic thought processes…drastically lowering a patient’s quality of life. In addition to the stress and horror for the patient, it is equally devastating to their loved ones and caregivers.

It is a worldwide epidemic. More than 35 million adults in the world suffered with Alzheimer’s in 2010. In their report on Alzheimer’s Disease and other Dementias, the World Health Organization (WHO) stated that they expect the number of cases to more than triple in the next three decades. They go on to explain, “There are no available treatments that stop or reverse the progression of the disease, which worsens as it progresses, and eventually leads to death.”

In fact, Alzheimer’s is in the top 10 leading causes of death in the United States, according to the Center for Disease Control and Prevention (CDC).

It is typically a gradual disease that takes years to manifest but some patients have a more aggressive case that progresses rapidly. It is most common in people over the age of 65, however, there are cases of younger people aged 30-40 being diagnosed with “early onset” Alzheimer’s.

There are ways to protect yourself and lower your risk of Alzheimer’s disease starting right now.

I’ve talked extensively about the importance of diet to protect your brain health. The “low fat” revolution has essentially starved our brains for more than 30 years. Your brain needs healthy fats and cholesterol to function because it is more than 60% fat – the fattiest organ in your body!

There are certain aspects of your diet and lifestyle that can raise your risk of Alzheimer’s disease as well as many other serious conditions. Heart disease, smoking, diabetes, obesity, and head trauma are precursors to this form of dementia.

Are there causes that the government and medical community don’t want to discuss? Naturally.

The Burden of Aluminum on the Human Body

One such cause is overexposure to aluminum, a metal that the Environmental Protection Agency (EPA) has designated as a known neurotoxin – meaning it is toxic to brain matter and the central nervous system.

Aluminum is one of the most abundant metals on the planet so you’re going to find trace amounts of it in your soil, food, water, and air. In the past few decades, aluminum has become an inexpensive – yet potentially deadly – metal used in the manufacture of soda cans, house siding, roofing materials, pots and pans, and aluminum foil.

If products used for storage or building was our only exposure, it might not be so bad. That is not the case. Topical goods such as cosmetics and antiperspirants have added aluminum that is able to seep through the pores of your skin, directly into your blood stream. We ingest it as an additive to a long list of manufactured food (used as an anti-clumping agent), taking it directly inside our bodies. 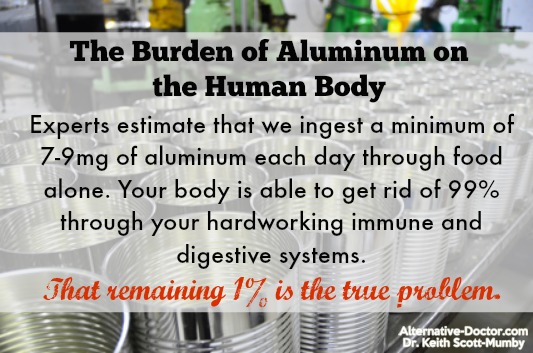 Aluminum is even found in vaccines, which are mandatory in many areas of the world in order for your child to attend school. It is used in baby formula and is added to a host of over-the-counter and pharmaceutical drugs.

Experts estimate that we ingest a minimum of 7-9mg of aluminum each day through food alone. Your body is able to get rid of 99% through your hardworking immune and digestive systems. That remaining 1% is the true problem. Where does that “trace amount” end up?

All over your body…but it loves your brain and central nervous system best.

It is regularly identified in the brain tissue of patients with Alzheimer’s, autism, epilepsy, and many other diseases that begin in your brain.

Those areas of your body that regenerate (grow new cells) quickly don’t accumulate high levels of aluminum. Other organs – such as your brain, heart, and bones – that don’t have rapid cellular growth are at higher risk of aluminum toxicity.

The Narrow View of the Alzheimer’s Epidemic

The United States National Institutes of Health (NIH) stated in their report that, “firm conclusions cannot be drawn about the association of any modifiable risk factor with cognitive decline or Alzheimer disease.”

In other words, after all this time, the conventional medical community still has no idea what raises or lowers your risk of Alzheimer’s disease and other conditions of the brain. There have been no changes in the way Alzheimer’s disease is diagnosed in more than 20 years.

In the 50 pages of data from WHO’s report on Alzheimer’s, it’s telling that there is no emphasis on true preventative care or an exploration of holistic or alternative therapies that have been scientifically proven to slow or even reverse the effects of AD.

Buried in the pages of information is this single sentence about prevention: “A higher level of education, as well as Mediterranean diet were shown to decrease the risk of developing AD.”

They talk about who is affected. Creating more drugs to treat it is a big focus (with a small bit about a vaccine that may or may not be a priority). They explain the rising financial burden for health care, housing, and therapy.

Nothing about preventing more cases now.

Nothing about stopping the disease’s forward momentum in patients now.

Their estimates for progress in “understanding Alzheimer’s” is written in terms of decades when there are billions of people currently unaffected by AD who would find more value in knowing how to stop it before it starts…before they need the next “Big Pill” to help them manage their condition.

I don’t want to wait for decades to do something about the risk for AD.

Here are actionable steps you can take to lower your personal risk of Alzheimer’s disease that you can implement into your life right now.

You can take steps right now to prevent Alzheimer’s disease. Don’t wait for government agencies to get around to it…you’ll be waiting for decades.