These days, the reality of cancer seems to be an almost expected part of life. Chances are high that either you or someone you know has dealt with this human epidemic.

Any techniques that can keep the #2 killer on the planet from claiming your life should be considered. Nothing should be off the table in a (literal) life or death situation.

New cancer discoveries are made all the time but the likelihood that they’re reported (much less legitimately discussed) in either the mainstream media or the medical community are slim.

The Human Body and The Power of Light

The National Aeronautics and Space Administration (NASA) was the first to discuss the power of red light in the treatment of cancer as well as wound repair.

While most people today use red light in cosmetic applications (such as blotchy skin, minimizing scars, or to prevent wrinkles), the medical modalities receive little publicity. There’s nothing wrong with getting clearer, younger looking skin from red light but it certainly shouldn’t have the loudest cheering section!

Lighting the Way to Beating Cancer

This “new” cancer discovery has been around for a long time but I bet you’ve heard little (or nothing) about it. That’s a true shame because where red light truly shines is in the prevention and destruction of cancer cells.

You can be eating right and getting the nutrients you need but they do you no good (at all) if that fuel never reaches your tissues. The flow of your blood has a lot to do with this process.

High-viscosity blood is thick and moves slowly. Such sluggish flow doesn’t carry as much oxygen or nutrients to the areas that need it. You know how important oxygen is to your body!

Researcher Otto Warburg determined that if your tissues don’t get enough oxygen, your risk of cancer is substantially higher. Oxygen is a natural cancer protector! Then there are the vitamins and minerals your body also requires to destroy abnormal cells.

If you’re not getting sufficient levels of vitamins and oxygen critical to your bodily functions, your immune system has nothing with which to fight cancer!

There’s an unnatural obsession with fat in the blood when most heart events are caused by blood clots (not sludge created by fat).

Researchers with Edinburgh University in the UK showed that blood viscosity is crucial. Raised blood viscosity is at least as important as two old favorites: blood pressure and so-called “bad” cholesterol (LDL) in predicting death by heart attack. In fact, it’s more dangerous than smoking when it comes to heart disease risk factors!

Doctors and pharmaceutical companies have trained average people to turn to a pill for anything and everything that ails them. When patients get sicker, it’s time for another pill or something even more extreme or life-threatening.

This is the endless cycle in regards to cancer, heart disease, diabetes, and so much more. There is another way…a better way.

Take Charge of Your Own Health Journey

It’s time to take your health into your own hands. There are new cancer discoveries that are natural and effective that can change the way your body reacts to these damaged and mutated cells.

You can personally improve the viscosity of your blood with red light therapy. It’s harmless, inexpensive, used in the privacy of your own home, and there are none of the horrific side effects that you encounter with prescription drugs. Boost delivery of life-giving and disease-fighting oxygen and nutrients to starving tissues and get rid of the toxins that contribute to aging and illness.

This is particularly important if you’re currently fighting cancer. All the enzymes, vitamins, antioxidants, and so forth won’t do you much good if your blood can’t deliver them!

Red light therapy is an excellent delivery system. This new cancer discovery (that isn’t all that new) is referred to as “phototherapy.” You lower inflammation by irradiating your blood directly with light.

It looks silly in action (you stick it up your nose) but it works and that’s what matters! Your nasal passages have an enormous network of blood vessels. Even more than the brain, when you look at a blood flow scan. 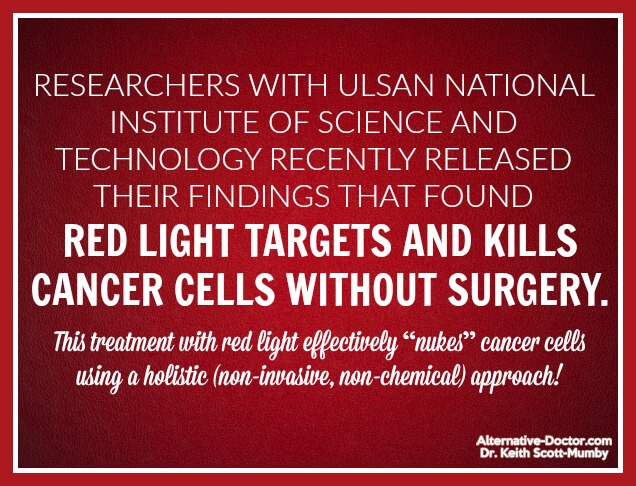 Where once phototherapy was the use of a laser on the blood (that was then put back in your body), new devices use LED lights instead.

Kendrick C. Smith with the Stanford University School of Medicine states that the results between lasers and LED light are virtually the same. It’s the light itself that heals.

Since LED is not coherent light, light therapy device manufacturers increased the energy levels so you receive the results you need in the comfort, privacy, and safety of your home. The right energy dosage safely excites molecules that then signal for a healing response to your body.

Your body lines up its various elements to activate the immune system, release antioxidants, increase blood flow, repair damaged DNA and encouraging the cell death (apoptosis) of damaged cells that could turn cancerous.

With intranasal phototherapy this effect starts with the blood passing through the nasal region and then spread throughout the body through the circulatory and lymphatic systems. Much like the laser treatments of old without having to remove and return your blood to your body.

Reported in the Journal of the American Chemical Society, this treatment with red light effectively “nukes” cancer cells using a holistic (non-invasive, non-chemical) approach! They determined that this gentler method to targeting and destroying cancer cells could be used against a wide range of cancer types.

Every Weapon in My Anti-Cancer Arsenal

Modern cancer treatment is a little behind the times. I’d even go so far as to say they’re barbaric. What do I mean?

Surgery involves slicing you open and carving out the tumors.

Chemotherapy is a poison you take to kill cancer cells. The only problem is it poisons a good chunk of your healthy cells too.

And radiation — well, one of the side effects of radiation is that is CAUSES cancer (think of Hiroshima victims). Does that make sense to you?

Despite the fact that millions of people have survived cancer, the treatment is basically as bad—or worse—than the disease itself. That’s not my kind of medicine. This isn’t supposed to be torture or abuse!!

And what’s worse…  You might still be at risk for cancer coming back.

How is that possible? Let me explain…

You can let yourself in for surgery, chemotherapy, or radiation if you want, but all three do NOTHING to address the reason you got cancer in the first place. You have to get to the root of the problem if you want to kill cancer for good.

Which is why I’ve prepared something here, especially for you today. You’ll have the opportunity to find out the REAL causes of cancer — and every alternative health weapon YOU can use to beat this ugly disease.