I am so GOOD I’m almost embarrassed! Yet again, I am ahead of the main pack. Let me tell you why I am boasting this time!

As most of you know, I wrote a great paradigm-busting book in 1999 called Virtual Medicine. It was a great best-seller for many years but eventually went out of date. I knew I had to re-write it, add new materials and bring it back to being a cutting edge book, way in advance of where even holistic people were thinking.

This I have done and it’s out any day now, called Medicine Beyond. 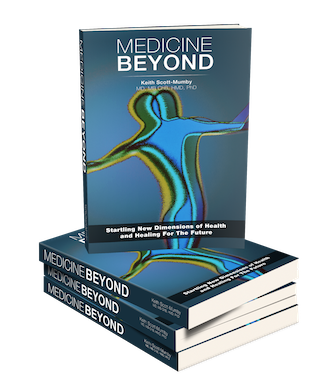 It’s double the size of the old book and packed with exciting revelations—all backed by innovative science, as I usually do.

I had to partly re-write science, since it’s gone all wrong in recent decades.

Gravity is virtually a disproven model today: it will take them 100 years to finally accept that one. I include a graphic of changes during a solar eclipse, which in one single glance shows definitely that gravity cannot be what people claim.

Instead, it’s an electric universe. This is far more than the cold, gravity-driven machine. Electromagnetic forces are 1,000 billion billion billion billion times stronger than gravity (1039) and much more realistic as the force which actually holds our universe together. Space is filled with electromagnetic energies, clouds have been photographed by The Hubble and, of course, radio telescopes.

Electricity and magnetism are out there! Whereas gravity has never been seen, felt or photographed.

Of course it follows, as night follows day, that if our model of nature is faulty, our models of healing will be disastrously wrong. And that’s what we observe; medicine on the wrong model is very destructive.

I’ve had to write it all for you, including electrical nutrition, how humans are better than plants at converting the Sun’s energies (no, that is not a misprint), electrical and electronic healing devices, light (an electromagnetic force) as a healing tool, from lasers to gem-infused light and last but not least electrical instruments for healing.

That’s where the fun starts!

As most of you know, electricity as an electronic healing tool has been derided by so-called science. As early as 1882, Silvanus Thompson, a fellow of the Royal Society and president of the Institution of Electrical Engineers, warned of the “gross impositions of the quacks and rogues who deal in the so-called magnetic appliances and disgrace alike the science of electricity and medicine while knowing nothing of either”.

We shouldn’t worry. Don’t forget Lord Kelvin, the greatest scientist of his day, declared that x-rays were a hoax!

The Birth of Electroceuticals

Catalogues of the General Electric Company in the late 19th century had a number of electronic healing devices. Its 1893 catalogue illustrates nine magnetos, ranging from one 20 centimeters long, boxed in pine, to the Phoenix, boxed in mahogany with a dial “to measure strength”. Assorted electrodes “for foot, tooth, and ear, with plated handles” were available for the device.

Another type of device was the induction coil, originally developed to detonate explosive charges. By 1888, GEC was offering induction coil apparatus for medical use, complete with bichromate battery, in a wooden case. By 1890 their range had grown to 10 models, with many variants, and electrodes engineered to treat particular parts of the body, from eye muscles to the spine.

I was pleasantly surprise in my research to find that the famous Mayfair chemists John Bell and Croydon, just around the corner from my former Harley Street clinic, at one time carried a range of such electrotherapy devices.

David Fishlock, an avid collector of these early devices, tells us that in the 1920s, a version of the Tesla apparatus, known as Roger’s Vitalator, began to make its appearance in barbers’ shops as a way of treating minor ailments, including bald patches and dandruff.

Historically, as far back as 1890, the American Electro-Therapeutic Association conducted annual conferences on the therapeutic use of electricity and electronic devices by physicians on ailing patients.

Yet, according to the self-styled experts and scientists, all this was a hoax. It was not merely unproven: it was proven worthless. Does that sort of remark sound familiar? It is being used to attack homeopathy, even as I write this.

Anyway, I’m planning to tell you more about the new book in coming weeks (a lot more!) But what triggered this article was the very weird coincidence of an article from Medscape arriving in my inbox, which is directly relevant to this theme (no, I don’t really believe in coincidences either).

It seems that electrical healing has gone mainstream!

One is reminded more than ever of the old adage, that discovery goes through four stages:

3. There might be something in it but where’s the proof?

Stage 2 (anecdotal evidence, so-called), is where we are supposed to be. But how long does anecdotal remain a valid accusation? If orthodoxy simply ignores the pioneering work of Robert Becker, Andrew Marino and Joe Spadaro and the many other published authors in this field, does that mean evidence is still anecdotal? How is a large body of peer-reviewed and published research on micro-currents and voltages in healing in bone and other tissues considered “anecdotal”?

The Medscape editor is cautious but positive, with these words:

“As researchers gain a better understanding of the interactions between our nervous and immune systems, bioelectrical medicine is increasingly looking promising in treating numerous conditions, from pain to diabetes to possibly even cancer.”

The idea is to target the same receptors as biochemical therapeutics; so, for example, pan relief electrotherapeutics will aim at deadening the nerves which transmit pain, much as analgesics do. It’s a limited model but it’s a good start!

We had developed a new anti-inflammatory molecule, named CNI-1493, and we were studying its effects in the brain. Surprisingly, a small amount of CNI-1493 in the brain completely blocked the release of tumor necrosis factor (TNF)—a proinflammatory cytokine—throughout the body of the animal. This made almost no scientific sense at the time. In the course of unraveling that finding, it became clear that we had come across something that was extremely important—the ability to control the drug target, TNF, by using a mechanism that was based on nerve function. The mechanism proved to be dependent upon CNI-1493 activating the vagus nerve, and signals traveling in this nerve to the body inhibited TNF production by the immune system.

So why not stimulate the vagus nerve directly?

That was the ultimate plan. The results were completely unexpected and generated a series of papers in Science and Nature journals.1-3

An important early trial was reported at the American College of Rheumatology in which an implanted electrode was used to treat patients with epilepsy and rheumatoid arthritis.4

In my book I reported on Dr. Tracey’s meeting with a patient in Bosnia, who went from being unable to walk around or play with his kids, to essentially returning to work as a truck driver and playing with his children regularly. He had a dramatic clinical response after having a vagus nerve stimulator implanted.

The New York Times reported another patient who was unable to even pick up a pencil prior to receiving an implant. She had not responded to many biologic agents, but now she’s essentially in remission. It’s fairly clear that the approach can work in patients. It’s hard to argue that when someone has failed to respond to five biologic agents that her improvement is due to the placebo effect. There are plans to have these trials replicated and extended.

The answer is YES.

There is some very interesting data from a number of laboratories that nerves producing nerve-derived signals can control the ability of some tumors to grow and of some tumors to metastasize. Considering what we know about angiogenesis and factors regulating metastatic potential, we can begin to think in terms of how those drug targets might be influenced by neurotransmitter-based signals.

This is not something in the distant future; this is a testable hypothesis now. It’s being tested as I write.5

Please understand this is not a shored up version of Rife’s work. His process destroyed cancer cells, using radio frequencies. What I am describing here is supercharging the immune system and other organs with electrical signals via the neurological system.

It really is electroceuticals! There has been a massive thaw in the ice.

At the outset, devices will be implanted surgically—whether by neurosurgeons or other specialists will depend on the indication. Downstream in the not so distant future, as these devices get smaller and more adaptable, this will change. Maybe someday even general practitioners could be involved in deploying devices using patches or transdermal application.

These devices will communicate to the doctor through hand-held iPads and smartphones. The “prescription”—the degree of nerve stimulation or inhibition—will be delivered from the doctor’s iPad right to the patient’s device.

Please note: We are not talking about the distant future. It’s happening already, and there is clear evidence that it works through mechanisms that conventional medical science understands and can work with.

In Dr. Tracey’s own words: the adoption of these devices and of this approach will be driven by clinical successes, patient satisfaction, and the interest that doctors have in providing therapies to their patients that are less toxic, safer, and more effective.

Meantime, look out for Medicine Beyond. It will absolutely blow your mind! See, I was there before all the rest. You can’t afford NOT to have this book. 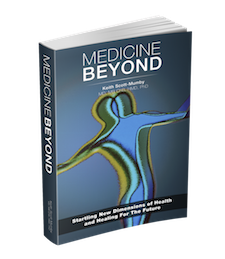 Here’s to an entirely different kind of healing and medicine, based on the new biology and new physics.