Everyone knows that meditation is soothing and calming, you relax, your blood pressure comes down and you live longer (well, almost everyone knows). 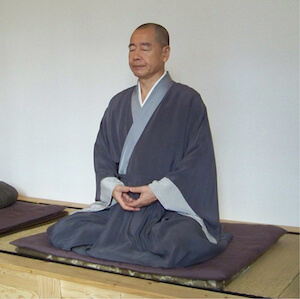 I used to do it when I was at med school. I had a big passion for all things Japanese, especially Zen Buddhism. I wrote a special form of poetry called Haiku and I won a round-the-world trip for one I wrote in 1967. I worked it out as several hundred dollars per syllable prize money!

The trouble is, it takes years to get good at meditation. Some say 30 years.

How about if we could get all the health benefits of meditation in less than 10 minutes? Sounds good?

We have something better to offer: electronic and technical brilliance. We are already w-a-y past anything the Chinese could do with acupuncture. That’s old-fashioned, crude and rather brutal, actually, shoving needles into people. Ugh!

It’s much smarter to project red laser light into the acupuncture points and you can even have the light carry the electronic “signature” of remedies. I covered all this in my earth-shaking book Medicine Beyond.

Let’s get back to electronic gadgets and their ability to modulate biological parameters and so influence health.

You will have heard of binaural beats and their ability to entrain brain frequencies. Done well, it can take a person from highly buzzed “beta waves”, to soothing, calm, relaxed alpha or even theta brain states.

Even binaurals are a little bit old-fashioned; a bit behind the times. Binaural beat technology has been around since the 1970s. The first big step came with a ground-breaking paper entitled “Auditory Beats in the Brain” by Dr. Gerald Oster of Mt. Sinai Medical Center, published in the October 1973 issue of Scientific American.1

Oster introduced the term binaural beats, which occurred in the brain when sounds of different frequencies were presented separately to each ear.

What happens is that the entire brain then resonates at 4 cycles per second. That just happens to be theta brainwave frequency (4- 7 cycles per second) and is characteristic of deeply relaxed, trance-like states.

But it gets better; far better. These days we can add flickering lights, which seem to drive the brain even more powerfully than just binaural beats, particularly in the alpha and theta frequencies. This effect was discovered in the 1940s by researcher Gray Walter.

Add slow Baroque music, which has scientifically-proven health enhancements and we get a terrific healing, relaxing technology.

All that needs adding is my sweet, gentle voice (ahem!), guiding you on sensual and exciting mental imagery explorations, such as visiting the Isle of Avalon, Atlantis, galaxies and deep space, and we have a stunning combination that makes relaxing meditation not just easy but irresistible! You practically can’t fight it! You’ll be down in a deep theta state before you know it.

In fact I can boast (from the currently published science) that devices like this can transform your physiology into the same state as a skilled meditator, in just seven minutes! 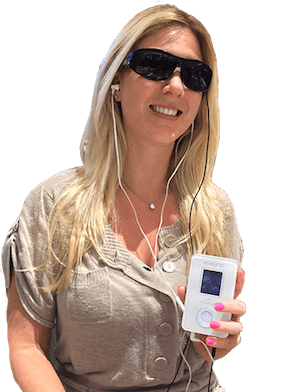 A Bit Of Theory

Robert Monroe of the Monroe Institute of Applied Sciences investigated binaural beats, which he famously used to generate “out of body” experiences in himself and others.

In thousands of experiments, using an EEG machine to monitor subject’s electrical brain wave patterns, Monroe verified that he could indeed entrain brain wave patterns using binaural beats. Most importantly, he showed that the response did not only happen in the area of the brain responsible for hearing, or only in one hemisphere or the other, but the entire brain responded in harmony, the wave forms of both hemispheres becoming identical in frequency, amplitude, phase, and coherence.

Many researchers have since verified this phenomenon. Language and speech pathologist Dr. Suzanne Evans Morris, Ph.D., says “Research supports the theory that different frequencies presented to each ear through stereo headphones…create a difference tone (or binaural beat) as the brain puts together the two tones it actually hears. Through EEG monitoring the difference tone is identified by a change in the electrical pattern produced by the brain.

For example, frequencies of 200 Hz and 210 Hz produce a binaural beat frequency of 10 Hz. Monitoring of the brain’s electricity (EEG) shows that the brain produces increased 10 Hz activity with equal frequency and amplitude of the wave form in both hemispheres.”2

Many scientists working in the field have now confirmed, unequivocally, through brain-wave EEG monitoring, that binaural beats have a powerful health regulatory effect.

What Can It Do For YOU?

Almost anything you want!

Over and over this new technology has been scientifically demonstrated to change physiology and your mental landscape. You can use it in whatever direction you wish:

Hastings says: We were able to test the effects of the sleep tape on brain waves with an EEG machine through the courtesy of the researchers at the Langely-Porter Neuropsychiatric Institute, part of the University of California Medical School in San Francisco. Dr Joe Kaniya, Director of the Psychophysiology of Consciousness Laboratory, monitored the brain-wave frequencies of one subject as he listened to the sleep tape.

The chart recording showed a typical sleep onset pattern: initial alpha waves, then a slowing of the brain waves with sleep spindles, and finally a pattern of stage 2 and 3 sleep brain waves in the low theta range…the patterns in the various stages demonstrated that the tape was influencing the subject’s state.3

Of course these days audio is much simpler, using MP3 files, instead of cassette tapes, which are easily damaged.

The production of alpha and theta patterns in the brain correlates well with Harvard mind-body medicine pioneer Herbert Benson’s “Relaxation Response”, which is the exact opposite of the “fight or flight response.”

The fight or flight adrenalin response takes blood flow away from the brain and toward the periphery of the body, increases heart rate, blood pressure and breathing, etc. In this state, learning abilities, as well as other mental functions including problem solving and reasoning ability, are markedly inhibited.4

The ability to reconcile and resolve disputes is also impaired. Quarrelsome? Not good!

The relaxation response, on the other hand, mobilizes us for inward activity by reducing heart rate and blood pressure, relaxing muscles, and increasing the percentage of oxygen flow to the brain.

Get Your Electronic Zen Here!

In this day and age, we all need one of these devices. It’s the perfect, soothing answer to modern stressful living.

The best device I know is called the Kasina and is produced by Mind Place. My good friend Robert Austin, the CEO, has helped to integrate my spoken mind journeys. Among them: Avalon, Atlantis, Tour of The Universe, Love, Gratitude, Forgiveness and “white light” (for pain).

The Kasina comes with 60 other tracks, in several folders: wake up tracks, go to sleep tracks, recharge your energies tracks, trance-like reverie and a collection of wild possibilities called “Mind Art”.

What I also like is that you can add your own tracks. That’s better than all the competition models, which seek to charge you for the use of their tracks.

Once your “meditation” is in the Kasina, it’s yours to keep.

My additional tracks come FREE with your purchase, in addition to the many factory tracks.

It’s delightful to use and very easy.

Go watch a quick 6-minute video with me demonstrating one here.

If You Live in the U.S. or Canada