Fake Diseases… That Nobody Wants (Or Has)!

I think I already mentioned my contempt for psychiatry and it’s pseudo-science (well yes, I mention it often, don’t I?)

Most of you know I’m wrapping up a book to defeat all of psychiatry by making the investigation of physical illness mandatory FIRST, before even thinking of medications. Over 95% of so-called mental diseases and patients are in fact things like food allergies (severe depression, schizophrenia, ADD, ADHD, autism, anxiety states, panic attacks, just to name a few…), heavy metal poisoning, hormone lack or imbalance, gut microbiome disorder (what we used to call dysbiosis), and so on…

What is needed is a complete revision of that “profession” (I splutter it out with my nose high in the air). Eww! They need to stop classifying symptoms and calling those diseases (depression can have a dozen causes, one symptom).

Thing is, they claw the air looking for symptoms, meaning new diseases. Some of these are LAUGHABLE.

Have you heard of oppositional Defiant Disorder or ODD? It means a kid who won’t do as he or she is told. Stop the clocks! Shut the banks! Arm the missiles! Ready the National Guard. Oh my God! This is a terrible epidemic going on right now. It’s sweeping Mankind, it’s… it’s a HOAX!

C’mon. First off, why blame the kid? I know parents where the only sane thing to do is tell them to get screwed. Why is it the kid’s disease? I have a saying of over 40 years: don’t fix the kids, fix the parents.

Almost all of a kid’s problems come from dysfunctional parents. That’s not a psychiatric disease. It’s called parenting problems (and no, these are not easy to define and fix). 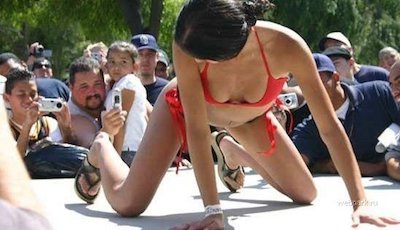 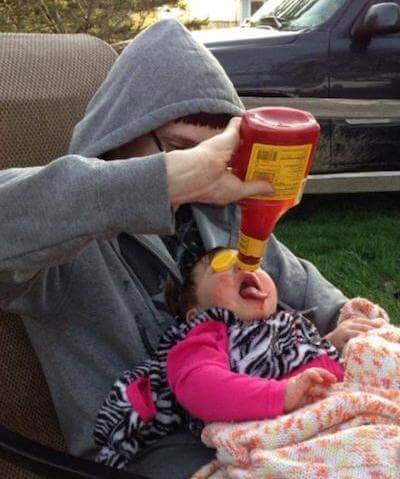 Bad parenting! (as in REALLY bad)

According to the “experts”, signs of ODD generally begin during preschool years. Sometimes ODD may develop later, but almost always before the early teen years. These behaviors cause significant impairment with family, social activities, school and work.

Of course it’s normal to exhibit oppositional behavior at certain stages of a child’s development. It’s called ADOLESCENCE; H-e-l-l-o! That doesn’t stop these loonies called psychiatrist from trying to demonize it. Next thing is, the kid gets medicated… end of one small life. Very evil.

What about Orthorexia nervosa? That sounds horrible doesn’t it? Go on… have a guess!

Orthorexia nervosa is being careful about what you eat! Apparently there’s a new disease going round, especially in places like Germany, Australia and California. Sick people refuse to eat junk any more and insist on eating organic whole foods that taste good.

These sickies might reject sugar, salt, caffeine, alcohol, wheat, gluten, yeast, soy, corn and dairy foods. Not only that but they don’t like to eat any foods that have come into contact with pesticides, herbicides or contain artificial additives are also out.

These poor people have Orthorexia, which means (in Greek) “healthy eating disorder”! It affects equal numbers of men and women, but sufferers tend to be aged over 30, middle-class and well-educated, who read about food scares in the papers, research them on the internet, and have the time and money to source what they believe to be purer alternatives.

No, I mean, this is a real demographic.

OK, this is serious. When you’ve done laughing, I’ll continue…

We have a sick community here, right in the middle of us. We know that orthorexics are infecting others at a rapid rate, because the number of people who want to eat well is growing rapidly, much to the alarm of Big Food.

The condition was named by a Californian doctor, Steven Bratman, in 1997, and is described as a “fixation on righteous eating”. Until a few years ago, there were so few sufferers that doctors usually included them under the catch-all label of EDNOS (eating disorders not otherwise recognized).

“I am definitely seeing significantly more orthorexics than just a few years ago,” said Ursula Philpot, chair of the British Dietetic Association’s mental health group. “Other eating disorders focus on quantity of food but orthorexics can be overweight or look normal. They are solely concerned with the quality of the food they put in their bodies, refining and restricting their diets according to their personal understanding of which foods are truly ‘pure’.”

The obsession about which foods are “good” and which are “bad” means orthorexics can end up malnourished.

Eating well means you will get malnourished? Actually, I can ease off in my mockery for a moment and say that there are people who go too far: they look scrawny, yellowish (often) and, most telling of all, are far from happy.

Apparently you can tell the orthorexics are nuts, because their behavior commonly causes sufferers to feel proud of their “virtuous” behavior. Well, that’s the proof we need then! It’s junk food for me!* 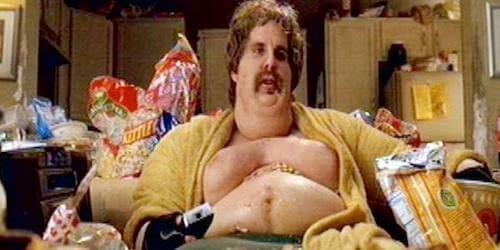 We should all be like this guy: non-Orthorexic and therefore sane!

Ms. Deanne Jade, founder of the National Centre for Eating Disorders, said: “There is a fine line between people who think they are taking care of themselves by manipulating their diet and those who have orthorexia. I see people around me who have no idea they have this disorder. I see it in my practice and I see it among my friends and colleagues.”

Jade believes the condition is on the increase because “modern society has lost its way with food”. She said: “It’s everywhere, from the people who think it’s normal if their friends stop eating entire food groups, to the trainers in the gym who [promote] certain foods to enhance performance, to the proliferation of nutritionists, dieticians and naturopaths [who believe in curing problems through entirely natural methods such as sunlight and massage].

“And just look in the bookshops – all the diets that advise eating according to your blood type or metabolic rate. This is all grist for the mill to those looking for proof to confirm or encourage their anxieties around food.”

They need medication from nice, kind and wise psychiatrists.

Doesn’t this scare you? I think it should. If rejecting what Big Brother demands is a disease, then they can incarcerate and force-medicate anyone who defies authority. Rebels are sick; they are a danger to others. This is the line that Soviet Russia took under Stalin. Being dissatisfied with the way the government performs means you lose your rights. You are crazy, so that’s OK.

This is where the psychiatric “profession” is leading us and, if like me, you think the psychiatrists are the really crazy, sick, nightmare force for evil, I think you are pretty sane.

Keep eating your health foods, tell authority to piss off, and I think you’ll do just fine!

The post Fake Diseases… That Nobody Wants (Or Has)! appeared first on Alternative Doctor Dev Site.