Cancer is currently the #2 killer of men and women worldwide. It’s expected to overtake heart disease in the next two decades.

Listening to cancer organizations talk about “fighting cancer” gives the impression that they’re winning when in fact, they’re not moving the needle much at all. Orthodox medical care has made very little progress in conquering this disease.

Like many deadly illnesses, cancer has become the monster in the closet to be feared but at the end of the day, that fear presents its own set of problems.

The Bottom Line of the Cancer Conglomerate

Cancer is a business. An incredibly profitable machine that lines the pockets of doctors, facilities, charities, and pharmaceutical giants. Despite what you may think, despite what mainstream medicine wants you to believe, no one wants to turn off that cashflow tap.

It’s like asking a conglomerate that owns casinos to shut them all down for the benefit of gambling addicts. It’s just not going to happen!

To make things inherently worse, these cancer profits are protected by the government. You’re literally forced – sometimes through legal means – to accept what is offered whether you want it or not. That’s not a conspiracy theory. That’s a fact.

Your personal health is your concern and it should not be mandated by government.

Overcoming Fear and Fighting Cancer (Inside and Out)

It’s time to stop focusing on the symptoms. The manifestations of disease tell you little (to nothing) about the disease itself and they certainly don’t address the cause.

Treating what are virtually side effects of an illness gives it room to progressively worsen, to lead to other diseases, and ultimately claim another life. All the pills and treatments to “manage” the symptoms hide a much bigger problem.

What caused you to get sick in the first place?

Until that question is addressed and answered, you have zero control over the outcome. That’s common sense because even if you beat disease in the first battle, ignoring what initially caused it leaves you open to a much bigger war.

Most diseases are slow-moving. They can work behind the scenes for many years before evidence of a true issue makes itself known. Years of tissue mutation, nutrient-deficiency, or outright self-neglect that can be slowed, stopped, or even reversed if you turn your attention to it.

Cancer claims life after life and the cut, poison, burn mentality persists as the only “real” ways to fight it. But what if fighting cancer is focusing on the wrong thing entirely?

Yes, there are genetic factors to consider in less than 10% of cancer cases. Yes, your risk of serious disease rises as you age. With exception of these two origins, scientists and experts around the world point to three clear areas where you literally hold your own life in your hands.

In other words, it isn’t about simply fighting cancer anymore. What will make a real difference in preventing cancer death in the first place by addressing these three root causes.

Long before you’re diagnosed or after that first “win” where cancer goes into remission, you have the power to change the outcome. Cancer doesn’t have to kill but it also doesn’t have to take up residence in your life at all.

Isn’t prevention a far better way to beat a killer? Take away the weapons it uses!

I’ve talked about diet persistently for many years. I’ve written entire books about it. If you don’t understand the importance of what you do (and do not) eat by now, please go back through my countless writings on the subject.

The same is true for identifying and eliminating toxins in your daily life. Stopping the flow of carcinogens into your body and reversing the damage they’ve already caused at the cellular level is a topic I’ve been vocal about for decades. Again, there are many articles and books written by me on this subject.

Now I need to talk more about how emotions affect your physical health. It’s a causation that I’ve touched on as one of the few doctors who understand the power of your mind.

The human mind is an incredible tool that can be focused on healing your body. Ancient civilizations knew this and practiced it but much of that knowledge was lost, forgotten, or ignored for hundreds of years. 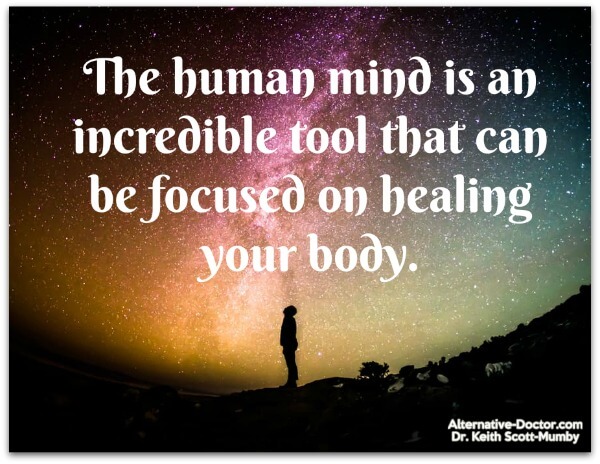 Only in the past decade have scientists begun to unravel the impact of emotional trauma, daily stress, and toxic relationships on your health. Fighting cancer and every other disease is next to impossible without an emotional unburdening that frees your mind up to aid in your battles.

I believe we are all – at this moment – fighting cancer. If not you, then someone you know. The statistics are jarring, terrifying. It affects 1-in-2 men and 1-in-3 women, claiming more than 8 million lives around the world every year. If something doesn’t change (and quickly), it’s only going to get worse. The World Health Organization (WHO) expects there to be a 70% increase in cancer cases in the next 20 years. It must stop.

In my latest book, I point out four major ways people abandon themselves emotionally and leave themselves vulnerable to deadly disease.

I get so disappointed when patients simply won’t address their mental and spiritual issues. For them it seems unimportant…even trivial. Patients have said to me, “I’m battling a serious illness and I don’t have time to think about whether I’m happy or not.”

That’s exactly when you need to focus on emotions!

It’s why I wrote “The Psychology of Cancer” – for those patients who always thought the emotional aspect was so much less important than the physical.

For more than 35 years, I’ve practiced medicine. I’ve seen many “fads” come and go. I’ve read millions of words of scientific research. I’ve had successes and failures with my patients.

There is clear scientific evidence that if you are in a good place emotionally, your body defenses (especially your immune system) works better than if you living under a cloud.