Get Tanned Not Skin Cancer! The Safest Sunscreen…

First, You Need To Get the Sunscreen Facts Straight…

Vivien and I are traveling in Europe for the summer and now we have been sweltering in a record-breaking heatwave. As temperatures soar, in a place where air-conditioning is not standard, folks are beginning to suffer badly.

The low-salt diet patients are starting to pass out on the streets, as usual.

But everyone risks sunburn.

Yesterday Viv and I climbed a Lake District peak and—because it took 2 hours longer than expected—we took a hammering from the UV rays.

By coincidence (there are no real coincidences) I just got an article from my good friend Denie Hiestand, anxious to straighten out my followers on the real facts of sun blockers and just this morning I read the most stupid, ignorant and dangerous article on sun protection by a woman called Karyn Meier and sent out by David Riklan’s “SelfGrowth.com”.

She should quit; Riklan should be ashamed. I have never seen such a flagrant example of “research by Googling” and coming up with wrong stuff— dangerous wrong stuff. (http://www.selfgrowth.com/articles/Maier2.html)

DON’T BOTHER TO READ IT! I’M JUST GIVING YOU THE LINK FOR HONESTY.

Let’s start with her falsehoods and nonsense and finish up with the truth. Silly Karyn Meier believes the official industry myth of SPF factors (skin protection factor). Her ignorance truly stands out when she tells us to be sure to use a factor of 15 or over.

Those of you who read my writings will know that going higher than factor 15 is a total waste of effort and money. 93% of the Sun’s rays are filtered out at factor 15; even going up to factor 100 only gets you an extra few % protection.

But it’s far worse than that. If she knew anything at all, she would know that sun creams CAUSE SKIN CANCER. The Sun does NOT, repeat DOES NOT cause skin cancer.

In fact, as I wrote in Virtual Medicine, over a decade ago, people who avoid the Sun are the people who get skin cancer; it’s a proven and published fact, in a peer reviewed journal, but totally ignored by the know-alls, who just circulate the universal medical myths (or “experts” like Meier, who just Google for their “facts”).[1]

Get out into the open air, let the sunlight pour down on you and you’ll not suffer. Hide from it and your skin becomes like a tinderbox, that will burst into fire if you do finally get to see the Sun.

By contrast, Denie Hiestand tells the real truth about all those “slip, slap and slop” sunscreen products, in a way you all should know…

Sunscreens come in two basic formulations. One contains chemical compounds as the active ingredients and the other contains natural organic compounds. The two work very differently.

How the Chemical Ones Work

However, by locking up or concentrating this radiation into the chemical molecules, we are turning these molecules into miniature nuclear power plants, which then radiate back at us and cause immense damage. One could call it ‘point blank’ radiation of the skin cells.

Think about it, under normal sun exposure without a sunscreen, the sun’s rays get absorbed by millions of skin cells as well as penetrating the body tissue under the skin. Therefore, the radiation from the sun becomes dispersed over millions of molecules of skin and body tissue (which is the way we are designed to receive the sun’s rays).

No ‘one’ cell gets overloaded with concentrated radiation. 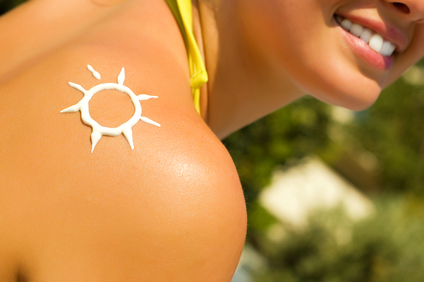 On the other hand, when you put on a chemical ‘radiation absorbing’ sun block, you are concentrating the radiation into a very small amount of surface skin cells by way of the chemicals in the cream sitting on and in the cells.

Using any type of ‘radiation absorbing’ chemical as a sunscreen actually increases the radiation impact of surface skin cells to a highly dangerous level that can, and often will, lead to skin cancer.

You do not have to be a rocket scientist to understand why skin cancer has gone up 92% since the sunscreen industry incorporated chemical ‘radiation absorbing’ compounds into sunscreens.

I often quote the fact that New Zealand and Australian farmers, who work 365 days a year in what can arguably be described as the most intense sunlight anywhere, and by-in-large never use sunscreens, have the lowest incidence of skin cancer in the western world.

Yet, their city cousins, who slip, slap and slop sunblock creams (at a higher level than any population in the world), have the highest level of skin cancer on earth.

Now To The Organic Compounds & How They Work…

There are two common forms of ‘so called’ natural or organic sun blocks, titanium dioxide and zinc oxide. However, titanium dioxide is not really ‘natural.’ It is a ‘di-oxide’ and thus a processed and manipulated group of molecules and there are reams of research showing real concern for their long-term health.

This leaves zinc oxide, one of the safest and longest used natural compounds known. Its use in skin protection and repair goes back to the Australian Aboriginals and the tribes of Africa.

Zinc oxide works as a sunscreen by the simple process of radiation ‘reflection’. The zinc molecules do not ‘absorb’ radiation, but reflect it back out, harmlessly (just like a mirror). That is why zinc oxide looks white, as full spectrum sunlight looks pure white to our brain.

Thus, when a sun cream incorporates natural zinc oxide in its formulation, most of the sun’s rays will never impact the skin cells and there is no concentrated or residue radiation in the zinc molecules to ‘fry’ or radiate the skin, as in chemical ‘absorbers.’ zinc oxide is also the only compound that covers the spectrum of rays from 260nM to 400nM, which includes most of the UVC range, and the entire UVB, UVA 2 and UVA 1 spectrum.

No other natural or chemically approved sunscreens, match this.

Can It Kill You?

However, some people have a ‘vanity’ issue and do not like the white look on their skin. To overcome this ‘vanity’ resistance, a chemical company developed a non-whitening zinc oxide based product.

They did this by finely grinding the zinc and then subjecting the molecules to a chemical process that ‘cloaked’ the ‘reflecting’ ability of the natural zinc with a chemical called triethoxycaprylylsilane. This is a silicon-based compound and that should put you on the alert.

Triethoxycaprylylsilane reduces the radiation ‘reflecting’ component of the zinc and makes it into more of an ‘absorbing’ compound. It is now not true zinc oxide, the molecules have been modified by coating and infusing it with a nasty new chemical.

There has been no long term testing of triethoxycaprylylsilane and we do not know how the body will react in the long run. The fact that the FDA says it is safe does not impress me: the FDA said Vioxx was safe and that killed upwards of half a million people before they (reluctantly) acted.

Just be aware that any company that says they are using ‘non-whitening zinc oxide’ are using a chemically laced, processed and modified form of zinc that is now not zinc oxide.

In the EU, products that have the coated and modified zinc in them have to list triethoxycaprylylsilane on the INCI ingredient list of the product.

Sadly, this is not the case in the USA, Australia or New Zealand. The public has no idea they are putting this untested new chemical on their absorb-able skin.

In my view, there is only one form of safe, natural sunscreen and that is unaltered zinc oxide. This is the only sunscreen component that should ever be used for sunscreen.

A natural sun cream (‘Environmental Protection’ cream) with 8% zinc oxide will give an SPF of over 15. So always look for the % of natural zinc oxide on the label.

The post Get Tanned Not Skin Cancer! The Safest Sunscreen… appeared first on Dr. Keith Scott-Mumby.