Have We All Missed This Really Big Cause of Autism?

Here’s compelling evidence that ultrasound scans may be the real cause of autism. Look at the evidence and then decide. I think there is possibly real cause to discard existing theories. We can only get a solution if we find the right cause of the problem, I’m sure you will agree.

I have made no secret out of the fact that it’s definitely NOT mercury. That has been disproven and the only people who cling to it are seriously underperforming intellectuals, who can’t accept real evidence that their pet ideas are WRONG!

I have repeated several times in my publications that children who never had ANY vaccine have been getting autism spectrum problems. That fits well with the model I like, which is live rogue measles organism. One sibling or vaccinated child could therefore, in theory, infect an unvaccinated child, who inherits the problem.

But here is a completely new model, right out of left field, which at least must have us all thinking… the evidence is just juicy!

For the source I turn to a new book by Jim West: Prenatal Ultrasound: A New Bibliography of Human Studies Conducted in Modern China. It’s an entirely new bibliography of ultrasound science and it’s something that, with a few exceptions, you will NOT see reproduced here in the West, where ObGyn is BIG money.

The word “ultrasound” commonly refers to diagnostic ultrasound, an acoustic technology utilized to view images of the fetus in real time, its position within the mother, and to view the mother’s reproductive organs. It is an economic boon to medical practitioners who advocate its routine use.

Diagnostic ultrasound has been in routine use for many decades. Ultrasound is far from ordinary sound, however.

It is a highly unusual form of sound when used for the purpose of prenatal or obstetric diagnostic examinations. Humans ordinarily are capable of hearing sounds in the range of 20 to 20,000 cycles per second (hertz). Ultrasound for fetal examination carries a frequency in the range of 3 to 9 megahertz, millions of cycles per second, above the EMF frequencies of the AM radio band.

Diagnostic ultrasound is widely declared to be “harmless” to the fetus1, despite some mothers describing via online forums such as The Thinking Mother’s Revolution, vaginal bleeding and pain, and others describing every detail related to ultrasound and pharmaceutical or vaccine associated damage to their child.

Ultrasound is now being applied to most of the entire world population during its fetal stage.

If it should emerge that there is real cause for concern—and it HAS now emerged—then this should stop, immediately, before it causes untold damage to the whole human psyche.

Critics argue, for example, that the exponential rise in autism incidence is a product of fetal exposure to ultrasound. If they are correct, then it may take many generations to recover from this misguided application of medical technology.

Remember the story of malaria? It means “bad air” (mal-aria) because that’s what was supposed to cause it at the time. Until the recognition that a mosquito-vectored parasite was the true cause, there was never going to be any effective progress. But people couldn’t see it at the time.

Is autism the new faulty “bad air” model? That it is being caused by widespread use of ultrasounds for in-utero imaging, at precisely the time when the fetus is most vulnerable.

These were carried out during the “explosion” of ultrasound use, in the years 1988 to 2011. The findings are pretty shocking. Jim West has also called on publicized trials carried out here in the West, where animal and cell studies clearly indicated a danger from diagnostic ultrasound. These were cancelled and had their funding withdrawn or were simply ignored by the greedy profession, dazzled by pretend science toys and anxious to reap a huge harvest of money.

In one sentence: ultrasound is NOT safe and damages the human fetus, precisely when it is most vulnerable.

Yet Western medical authorities loudly proclaim that diagnostic ultrasound is “harmless” and has “no known risks”. Well of course the risks are not known, if funding for studies of the dangers was deliberately withdrawn!

However, there are voices of caution, they are just not being listened to in the frenzy to sell this technique to a gullible public.

For example, Dr. Mendelsohn, former Chairman of the Hospital Licensing Committee of the State of Illinois and former National Director of Project Head Start’s Medical Consultation had this to say:

“Ultrasound is the latest example of an unproven technology being sold to the public as being ‘perfectly safe.’ It falls in the same class as painting radium on watches, fluoroscoping children’s feet in shoe stores, routine mammography, routine chest X-rays, radiation therapy for tonsils, exposing army personnel to atomic bomb tests – in each case, the medical profession failed to take the necessary steps to protect people against a malignant technology whose risks were already well understood.”2

And Caroline Rogers, referring to a large population study by Grether et al (2009) said this:

“Particularly confounding is the fact that Autism Spectrum Disorder plagues the children of high-income, well-educated families who have the best obstetrical care money can buy. Why would women who took their prenatal vitamins, observed healthy diets, refrained from smoking or drinking and attended all regularly scheduled prenatal visits bear children with profound neurologically based problems?”3 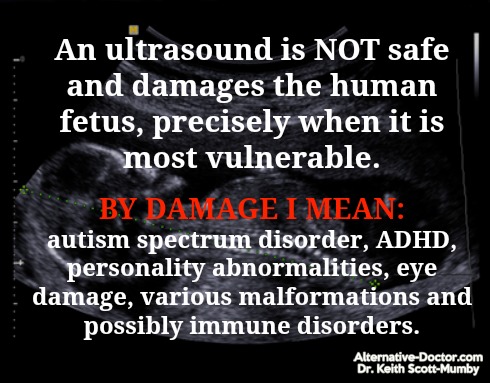 So, Do Ultrasounds Cause Autism?

Note that in his work, Jim West is wisely not stating that ultrasound “causes” autism. Simply that it adds to the toxic synergy and thus initiates vulnerability to other known stressors, such as vaccines, pesticides and other pollutants, stealth pathogens and pharmaceuticals.

Everyone is fixated on vaccinations, because autism often shows only after the routine vaccination program commences. The child appears healthy up to that time. I use the word “appears” advisedly. I already pointed out in a recent newsletter that Cuba, which has a vaccination rate around 95% (one of the highest uptakes in the world), still has very little autism, compared to Europe or the USA.

These demographic observations should cause us to think hard about what we suppose we know. Logically, you could say the Cuba story really counts against vaccination being the problem at all!

Let’s dig a little deeper into the Chinese figures…

Unknown to Western scientists, the hazards of ultrasound have been confirmed in China since the late 1980s, where thousands of women, volunteering for abortion, thousands of maternal-fetal pairs, were exposed to carefully controlled diagnostic ultrasound and the abortive matter then analyzed via laboratory techniques.

From these human studies, Professor Ruo Feng, of Nanjing University, published guidelines in 2000:

Dr. Feng is very clear. Avoid is not an ambiguous word!

The Chinese Human Studies are not generally available. You will not find them through Google or other search engines or medical databases. Even if a researcher knew the titles, the studies would not be found.

So Jim West has done a magnificent job.

If you are of childbearing age, or you have a daughter who is, you may want to read Jim’s compilation of missing data about the dangers of ultrasound in pregnancy. It is now available, published as a book with commentary, (or Kindle) with illustrative graphs and tables.

To read the entire press release about the book, go here.

To order the book, go here.

The post Have We All Missed This Really Big Cause of Autism? appeared first on Alternative Doctor Dev Site.