Every day, the danger of antibiotic resistance is gaining more attention in the media.

Finally, the scientific community and medical industry are realizing that our global dependence on antibiotics – prescribed by doctors, flooding our household products, and even injected into our food supply – could be a bad idea in regards to long-term fighting of infection.

What is Antibiotic Resistance?

Simply put, antibiotic resistance occurs when a bacteria, virus, fungus, or parasite survives the effect of the standard antibiotic, antimicrobial, or antiviral drug used to control them.

It’s a matter of evolution.

Germs that were treated effectively with antibiotics have mutated, developed an immunity to the drugs that once killed them, and they can pass their resistance on to the next generation of germs.

Here are a few of the known diseases slowly gaining antibiotic resistance:

As a result, what were once considered “simple” infections and illnesses – easily treated with a prescription or a shot – no longer respond to medication used heavily over the last eight decades. Urinary tract infections (UTIs), pneumonia, diarrhea, and skin or blood infections are the most common results of antibiotic resistant germs.

I’ve written about many of these antibiotic resistant “superbugs” in my groundbreaking book World Without Antibiotics, in particular because the world at large is at risk if we do not halt our overuse of antibiotics.

The Center for Disease Control and Prevention (CDC) calls antibiotic resistance “one of the world’s most pressing public health problems.” We are considered at a “crisis point” by the CDC, the World Health Organization (WHO), Infectious Diseases Society of America (IDSA), and virtually every other global organization that tracks disease and treatment. 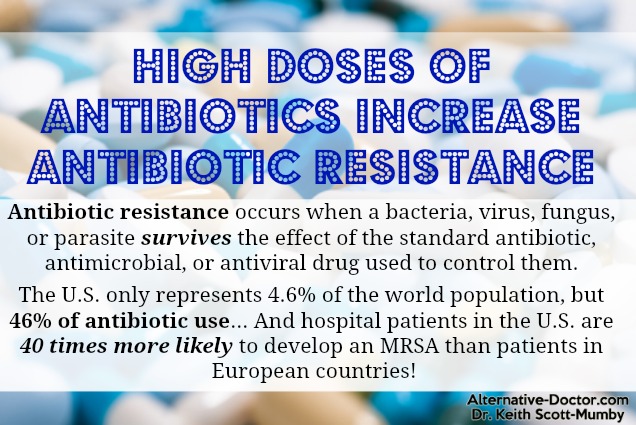 The United States represents 4.6% of the world population and 46% of antibiotic use.

If you want to understand how little value you have to the pharmaceutical companies, consider this: the last commercial antibiotic was developed forty years ago and Big Pharma refuses to make anymore because they don’t see a big enough return on their investment.

To make matters worse, the Food and Drug Administration (FDA) has non-working guidelines (according to experts in countless health organizations) on the clinical trials for antibiotics – making it almost impossible to bring new drug therapies (profitable or not) to market.

The real money to be made is in mood regulating drugs for depression and anxiety…not antibiotics. Therefore, when bacteria, viruses, fungus, and parasites become resistant to available antibiotics on the market today, there are no new ones being developed.

Why You Should Worry About Antibiotic Resistance

According to the National Institutes of Health (NIH), every year approximately 5-10% of patients develop a hospital-acquired infection (HAI).

In 1992, deaths attributed to HAIs were just over 13,000 per year. Today, more than 90,000 patients die annually as a result of a hospital-acquired infection that is resistant to standard antibiotic treatment.

Hospital patients in the United States are as much as 40 times more likely to develop an MRSA than patients in European countries.

Researchers at Oxford discovered another cause for serious concern. In their study, published in Molecular Biology and Evolution, they explained the danger of cross-resistant bacteria. Those are bacteria which are resistant to one form of antibiotic or antimicrobial that show resistance to other forms as well. This could drastically shorten the list of treatment options for some patients.

The first step of stopping antibiotic resistance and the spread of superbugs starts with YOU.

This is not a “Chicken Little” situation. This is a real and growing issue in every country in the world. If left unaddressed, it could conceivably lead to a day when patients once again succumb to illnesses that claimed the lives of millions before the discovery of antibiotics.

Pharmaceutical companies say there is no money to be made in developing new antibiotics – so steeling yourself against antibiotic resistance is up to you, every individual, and me before it is too lat