How to Prevent Skin Cancer (and Still Have Fun Outside)

Knowing how to prevent skin cancer is critical in a world where 1-in-5 men and women will develop it within their lifetime.  There are more than 3.3 million new patients diagnosed with non-melanoma skin cancer every single year in the United States alone.

There are more incidents of skin cancer than all combined cases of breast, prostate, lung, and colon cancers diagnosed annually.  In the past 30 years, skin cancer outpaces all other cancers combined.

The layer of skin that you can see is called the epidermis.  This is the thin layer you regularly shed and it contains three kinds of cells.  Below the epidermis are squamous cells that comprise your skin’s inside layer.  Below these are basal cells that are responsible for making new skin cells.

The deepest layer is called the melanocytes.  These determine your natural skin pigment and produce more melanin when you’re outside to protect you.

That’s what happens when you tan.  Your body goes into high-protection mode to shield your skin from UV rays.  It’s your body’s way of trying to prevent skin cancer by limiting the damage you sustain in the sun.

Too much sun, too often (particularly to the point of burning) and your body can’t keep up.

Most Common Forms of Skin Cancer 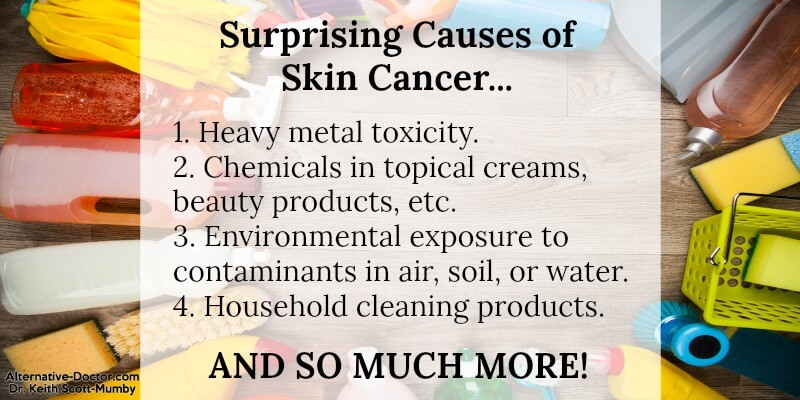 With treatment, skin cancer has the highest survival rate of all forms of cancer, despite being diagnosed more often than all other cancers combined.  In fact, there’s a 91% survival rate five years after treatment is completed.

Don’t take that to mean skin cancer is no big deal (all cancer should be considered a very big deal until you crush it)!  No skin condition should ever be considered minor nor should you ignore anything that could be “nothing” or could be “something.”

If in doubt, have it looked at by a physician!

One incidence of skin cancer and your personal risk for developing a second or third skin cancer (in the same or another area of your body) is higher.  Caution after a first appearance is critical!

You can prevent skin cancer (easily one of the easiest cancers to avoid) or catch it early if you know what to look for!  Here are the three most common cancers and symptoms to watch!

Despite All This: The Sun Isn’t Your Enemy!

Most cases of skin cancer are detected on the parts of your body most often exposed to the sun.  That doesn’t mean it’s the only places – because it’s possible to get skin cancer anywhere on your body (whether it’s exposed to sun or not).  Even your scalp, soles of your feet, and groin area are possible skin cancer locations!

Before you think I’m saying, “Avoid the sun!” I’m not.  You simply must understand the boundaries of safe sun exposure.  Choose a natural sunscreen (or make your own), wear a hat and sunglasses at all times, and never, ever allow your skin to burn if you can help it!

On the other hand, no matter what massive corporations selling sun protectants tell you – the sun is not the only culprit in skin cancer!

Learning how to prevent skin cancer is not just never getting in the sun.  You need the vitamin D3 that the sun’s rays stimulate your body to produce.  Exposure to natural sunlight transforms your pre-cholesterol molecule into vitamin D3.

Also, no one talks about all the other causes of skin cancer…

You Need to Know the Secrets!

Many people who believe in holistic and alternative therapies still think like oncologists!  They’re looking for that “one thing” that will magically cure them of cancer.  That’s not only irrational but dangerous.

If you’re not fully engaged in correcting the health problems which resulted in cancer, you’re not going to get a cure.  There are no quick and easy answers.

My book, Cancer Research Secrets doesn’t insist that orthodox medicine is bad and you should give it up.  I’ve been a practicing holistic MD for four decades and recognize your right to choose.

I’m not among those who scoff and deride those who choose chemo.  Despite its unpleasant effects, people do survive chemo.  There are around 12 million cancer survivors in the USA alone (most of whom went to conventional oncologists).

If that’s your choice, the abundant advice I give in this book will help you overcome the unpleasant side effects of chemo (but won’t stop it working, whatever the oncologists claim).  Over a ten-year period, none of my patients lost their hair or had unpleasant diarrhea.

The biggest Cancer Research Secret is that to prevent skin cancer (or any form of cancer), you have to eliminate the root causes.  Let me show you how!  Read it today!

The post How to Prevent Skin Cancer (and Still Have Fun Outside) appeared first on Dr. Keith Scott-Mumby.