Is A Human Head Transplant Even Conceivable?

That tale came to mind when I read a recent article in New Scientist magazine. Believe it or not, transplanting a human head is being seriously discussed. One surgeon claims he will be able to do it within 2 years.1

It raises so many questions. The first one to pop into my mind was: “Would it really be a head transplant? Isn’t it really a body transplant?”

We think of head transplant because it’s the smaller portion of the two. But are we not located in our heads? Surely, that’s where we are and therefore it’s the body which is being replaced? That’s what everyone thinks.

But it isn’t quite that simple. You have probably heard stories of transplanted organs carrying along at least part of the donor’s consciousness. The classic story of this genre is a woman who received the heart of a young 18-year old man who had been killed crossing the street on the way to buy a burger; she awoke from the operation and demanded a burger to eat.

She later found herself uncharacteristically eating junk food and wanting beer. Her daughter noticed that she was starting to even walk like a man.

There are now many stories like this. One really bizarre tale finds the recipient of a heart marrying the widowed donor’s wife! He eventually committed suicide, just like the donor had done, 12 years earlier.

So don’t jump to conclusions that we reside “in our heads”, whatever current superficial science claims.

The way to look at it really, is which part would you WANT to replace? If you had a brain tumor, Alzheimer’s, dementia or severe Parkinson’s disease, you wouldn’t, surely, want to keep the head?

But if your body has become old and decrepit, yet your mind was still alert and you were very much together and still YOU—a new body might seem an attractive idea. 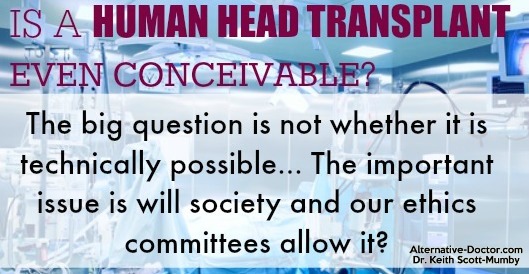 Is Such A Transplant Even Possible?

Well, yes. I have to admit that it would be a lot more feasible than a brain transplant.

The idea has been enthusiastically proposed by Sergio Canavero of the Turin Advanced Neuromodulation Group in Italy.

He claims the major hurdles, such as fusing the spinal cord and preventing the body’s immune system from rejecting the head, are surmountable, and the surgery could be ready as early as 2017.

The first successful head transplant was in 1970 with a monkey which lived for nine days until its immune system rejected the graft. Although few head transplants have been carried out since, many of the surgical procedures involved have progressed to the point of being at least feasible, if not exactly easy.

The big question is not whether it is technically possible. The important issue is will society and our ethics committees allow it? It raises very tricky questions, like what it means to be human. What is identity? Who would the resultant chimera person be, the head or the rest?

The really critical step is getting the two spinal cords to fuse together function properly. Blood supply is just about plumbing. But the nerves of the head have to start talking to the new body; otherwise it’s a no-no.

To help fusion of the cords, Canavero wants to flush the area with a chemical called polyethylene glycol (PEG), a widely used and biologically relatively inert solvent.2

Just like hot water makes dry spaghetti stick together, polyethylene glycol encourages the fatty nerve fibers to stick together and mesh. The patient would have to be kept unconscious for three or four weeks, to prevent movement, until this union takes place. But it’s possible.

When the recipient wakes up, Canavero predicts they would be able to move and feel their face and would even speak with the same voice. He says that physiotherapy would enable the person to walk within a year.

Several people have already volunteered to get a new body, Canavero says. Does that cause you to shudder? It does me…

The real problem, as every layman and doctor knows, is that of tissue rejection. The body doesn’t like foreign material and will blast it with antibodies. The head may be rejected. The fallout from this reaction could be very severe, including swelling and inflammation. If that happens, death is very likely.

Well, rejection is the same problem for liver and heart transplants and that has been more or less solved. We can use immune-suppressor drugs to manage the acceptance of large amounts of tissue, such as a leg or a combined heart and lung transplant, so quelling the immune response to a head transplant should be manageable.

The system we have for preventing immune rejection and the principles behind it are well established.

So again, I have to admit it’s possible, even if difficult. It’s still a creep idea!

As with cloning, there may also be concerns about a slippery slope. Once you start allowing this level of tinkering with human life, where will it stop? If you could successfully transplant big penises, I know there would be a vast Asian market, especially China. Still, it might save the poor old tiger from extinction.

And always, the unwritten and unspoken question: will people start being knocked off for “spares”, like in the movie Coma?

If you are a billionaire and want a few more years (after overeating, over drinking, and lazing around), someone, somewhere is going to belt someone over the head to get you a new body. It may be expensive but you can always get what you want.

Remember the Russian scandal of years ago, killing babies to harvest their stem cells? Nothing is more certain than the immorality of this kind of money.

And few reasons draw more money than staying alive and looking good. I think it can be predicted that, if ever this procedure becomes available, the black market will surge and maybe nobody will be safe on the streets at night!

But Will It Ever Happen?

Not surprisingly, the surgical community is wary of embracing the idea. Many surgeons contacted by New Scientist, the journal which ran the article that got me started, refused to comment on the proposed project, or said it sounded “too outlandish” to be a serious consideration.

Even if, one day, it became technically possible, I don’t think it will be any time soon; certainly not in a mere two years, as claimed.

Canavero is reportedly philosophical. “If society doesn’t want it, I won’t do it,” he told New Scientist. “But if people don’t want it in the US or Europe, that doesn’t mean it won’t be done somewhere else. I’m trying to go about this the right way, but before going to the moon, you want to make sure people will follow you.”

By the way, Canavero isn’t alone in his quest to start doing head transplants. Xiao-Ping Ren of Harbin Medical University in China recently showed that it is possible to perform a basic head transplant in a mouse. Ren will attempt to replicate Canavero’s protocol in the next few months in mice, and monkeys.3

Let’s hope this doesn’t develop into a surgical “arms race” or should I say “head race”?

The big problem I have with all this fancy surgery footwork is (to me) obvious: why not go for healing and repair of your existing body? Of course surgeons don’t like to think of anything mending. It’s busted; it has to be cut away, is their characteristic thinking mode.

Even physicians never really think in terms of healing or recovering. Your body has somehow “failed” and we need to keep you going with chemical patches; drug “solutions”. That’s their mindset.

Well, you know me. I’m always quoting cases of amazing recovery. People who were virtually at death’s door who suddenly go into reverse, get healed and end up in remarkably good shape.

Those of us who are not exactly sick are equally capable of restoring lost function by losing weight, starting to exercise, eat the rights foods, bring down our oxidative stress and generally turn the clock back 15- 20 years, depending on how serious we are about restoring health.

So why go to all the cumbersome rigmarole of replacing a crocked up body? Just fix the existing for heaven’s sake. Nature will help you!

The post Is A Human Head Transplant Even Conceivable? appeared first on Dr. Keith Scott-Mumby.