Is Botox Safe? And Does It Cure Depression?

Is Botox® Safe? Does Botox® cures depression? It’s a headline from the Huffington Post, so it must be true, right? (joke)

In fact, the spin-doctors, manufacturing junk truths, have gone as far as suggesting that Botox® will solve Alzheimer’s. I mean…. How nuts does it get? “It’s just another brain problem, so it surely must help,” seems to be the mentality.

That’s like saying baseball is the same as ping pong (well, they both use little round balls, don’t they?)

This is a classic example of falsehood, exaggeration and “headline” mentality in our buzz-infested modern world. Somebody floats a catchphrase and then is goes viral, as they say. Nobody questions the original source of the comment. Suddenly, it is “true”.

Of course Botox®, the commercial label for injectable botulinum toxin, is one of the deadliest poisons known. How can that “cure depression”? Even the question is foolish. But this must be a dream buzz for the manufacturers of Botox®, who are already being lashed with lawsuits, because of brain damage it causes.

The truth is that feeling good about yourself relieves depression, almost by definition. Improving our wrinkled, sagging looks is a great way to feel better about yourself. No problem there; of course that cheers anyone up.

Botox® is the worst imaginable way to get rid of lines, sagging and wrinkles. The study claims to have eliminated this issue. The people selected (it said) were past caring about their looks. It wasn’t getting rid of the lines, it was the administration of Botox®.

You kidding me? How is anyone past caring about their looks?

A recent study showed depression speeds up the progression that leads from mild cognitive impairment to full-blown dementia. And looking awful, fighting aging, is a way to feel depressed, for sure!

Improving your looks is great medicine! I already wrote about this weeks ago and pointed out why Botox® is a very bad idea: brain damage for a start; permanent paralysis for another.

In the absurd and unlikely event that Botox® injections could—somehow—cure depression and/or help Alzheimer’s, I know something that’s much more effective, far cheaper and is NOT permanently damaging. I’ll tell you about it lower down.

So What Was This Study?

A team of researchers based at the Psychiatric Hospital of the University of Basel, Switzerland and the Department of Psychiatry, Medical School Hannover, Germany, found that injecting botulinum toxin into the muscles just above the nose and between the eyes: the toxin inhibits the activity of the “frown line” muscles.

15 patients had the Botox®, 15 had just saline (placebo). These were patients who had not previously benefited from standard anti-depressant prescription medication.

Remarkable improvements in mood were achieved after just one injection. Six weeks after a single treatment depression for Botox® recipients were reduced on average by 47.1% while the placebo treated group experienced only a 9.2% reduction.1

The absurd claim, which is not scientifically justifiable, is to say that eliminating the frown—and even the feeling of frowning—does not benefit the person. Therefore it’s the magic of Botox® itself that did it! C’mon. Supposedly, the subjects recruited were suffering from long-standing clinical depression and they were selected as a group unconcerned with their facial appearance.

Can you imagine such a group of people? Were they blind?

The muscles that were injected paralyze the muscles just above the nose, between the eyebrows. That eliminates the frown (see image): 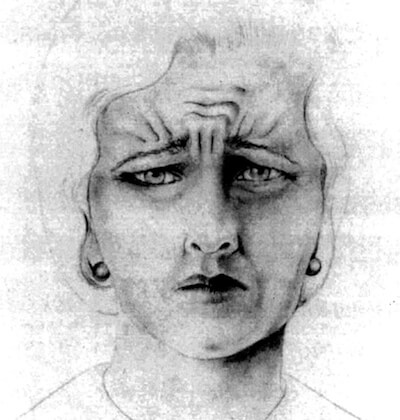 Look at all those wrinkles in the middle of the forehead. The scientists are trying to claim that the effect of no change would have the same value to a patient as those wrinkles gone. You can see straight away it’s dishonest. There was a placebo but not a blind outcome: the patient would know straight away something changes.

As to the next argument: that the disappearance of such lines could not possibly cheer up the patient, what do you think?

Thing is, there is an old psychology principle. If you do cheerful things with your body, you’ll feel cheerful. If you dance, you cheer up! If you SMILE, you cheer up (that’s an important one): it’s said that if you look UP, you can’t feel depressed!

Obviously, getting rid of those miserable frown folds will also cheer up a person. Duh! If your face looks younger OF COURSE you will be cheered up.

Or could it be that Miss World doesn’t like winning at all? She doesn’t feel good when crowned Queen of The Lookers? 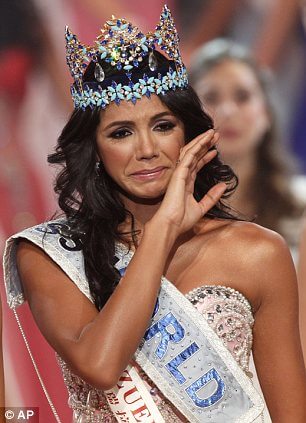 In 2011, Miss Venezuela, apparently cried when she was announced Miss World.
No doubt she cheered up, after thinking about the $millions in appearances!

In an article entitled Could Aesthetic Surgery Impact Alzheimer’s Risk? Foad Nahai, MD, FACS, is a Professor at the Division of Plastic and Reconstructive Surgery, Emory University School of Medicine, Atlanta suggested that if people have a negative attitude to aging and to their own appearance, this can have adverse effects on their mental health.

Those who feel good about themselves even seem to live longer. As evidence, Dr. Nahia points to a 2001 Mayo Clinic study of 250 women with an average age of 60 who had face-lifts between 1970 and 1975.

Although life expectancy at the time was 73, the average age of those that had died was nearly 81¾, while two-thirds of the group were still alive with an average age of 84.2

The face-lift patients had a life expectancy more than a decade beyond the general female population. But the study begs the question of whether people in this group are more affluent or simply take better care of themselves?

Affluent people in general live longer. And it seems likely that people who care enough about their looks to have a facelift would also develop healthy habits, e.g. keeping their weight down. 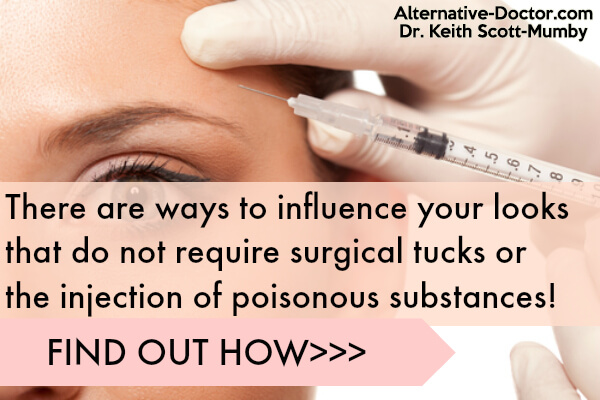 Better Ways Of Getting The Botox Effect

I believe that people who care about themselves and take care of themselves are a group of conscious, intelligent individuals who want to influence outcomes in their own favor. These are my kind of people!

There are ways to influence your looks, and thus how you feel about yourself, that do not require surgical tucks or the injection of poisonous substances.

The modern trick is to use what we call micro-current therapy (MCT). Instead of paralyzing your facial muscles, you tone them up to be firm and strong again, like in the days when you were younger.

With that in mind, I have been discussing this approach to aging and wrinkles with my world-class colleague, Dr John Hache of Pacific Health Options in Vancouver. We already did two webinars, which proved hugely popular. If you missed the latest webinar, check out the replay video here.

Once again I show you how the regular use of simple, safe and (in comparison) inexpensive devices, used properly, will tone the muscles of your face to the point where you look and feel years younger.

A version of this article appeared in The Huffington Post Sep 15, 2014.

The post Is Botox Safe? And Does It Cure Depression? appeared first on Alternative Doctor Dev Site.