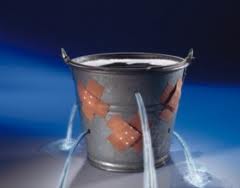 Now we come to yet another model of health and disease, concerning the way food residues are dealt with by the gut.

It is important to realize that the contents of the bowel are outside the body. If you imagine a piece of string entering at the mouth and emerging from the anus, you will readily see this is true. The defined space of the bowel (or lumen) contains a considerable immunological and toxic burden, including potentially allergenic food residues, waste toxins, food toxins (both natural toxins and artificially added man-made chemicals), bacteria, parasites and free radicals released by many processes taking place. Precisely because of our very intimate entanglement with this space, our bodies need to be protected from these deleterious substances.

There are a number of defense mechanisms which ensure the danger is contained. The lining of the bowel is designed to be impenetrable to this degraded matter and accepts molecules specially chosen for absorption. There is also an important immune defense system right on site in the wall of the intestine, to overwhelm and contain suspect immune material, before it breaks free and enters the circulation. Naturally, at times, this membrane protective layer is overburdened, especially if our lifestyle is abusive, and may let through some of the toxins. These enter the blood in the intestinal network of veins and are then transported to the liver, where detoxification takes place. The liver is our major defense organ, designed to detoxify chemicals before the cleansed blood is allowed to re-enter the normal circulation.

A serious problem can arise once the impenetrability of the gut mucosa is impaired. We call this “leaky gut syndrome” (of course!) and a whole cascade of problems can ensue, giving us yet another model of food allergy/intolerance and toxic overload.

The commonest causes of damage to the gut wall are:

What is supposed to happen is that our food is broken down in to small generic molecules: sugars go to glucose, for instance and proteins to amino acids. But if the digestive process is defective, the food remains considerably unaltered and remains identifiable by its immunological source. In other words “wheat-ness” or “pork-ness” of the food survives. This is then capable of setting up and allergic reaction, to wheat or pork, or whatever culprit is to blame. Even this wouldn’t be a problem, if the larger food molecules would only stay put: in the lumen of the bowel.

Unfortunately, as a result of increased permeability, the larger immunologically-active molecules escape into the blood, set up immune complexes, and wreak havoc. This results in an inflammatory process, which can affect all parts of the body, including the gut. This in turn leads to further loss of integrity of the gut wall and further leakage. Thus food allergy can become a cause of the problem, as well as the result, and a kind of vicious circle is entered.

The liver tries to handle these extra-large molecules and remove absorbed toxins, which should have remained behind in the bowel. When this happens the liver is also overloaded, leading to compromise of the cytochrome p-450 detox system, with resultant escape of toxins, production of excess free radicals and loss of nutritional essentials, such as glutathione and other sulphur-containing amino acids. The liver has to dispose of toxins somewhere and usually this ends up in the bile (most mercury, for example, is excreted into the bile). “Toxic bile” in turn will injure the gut mucosa and a second vicious circle is in progress. Toxic bile is also known to lead to chronic pancreatitis and possible pancreatic cancer (Braganza, J.M., Pancreatic disease: a casualty of hepatic “detoxification”? Lancet, 1983. ii: p. 1000-1002.).

But it is worse. For every toxic molecule excreted in the bile, the liver has given up one molecule of precious glutathione, to create a conjugate. That is what is supposed to happen. But when the conjugate enters the bowel and encounters more toxic bile with active free radicals, these attack the conjugate and release the toxin once more. The glutathione molecule is wasted and the toxin is back on the loose.

You will see at once why a diet rich in antioxidants is really essential in combating the chemical plague of our world. We cannot go on squandering our biological reserve in this way, without facing increased risk of cancer and, of course, accelerating the ageing process.

Table of symptoms which may indicate leaky gut syndrome

A neat and useful model. But is it valid? A test has been developed to establish whether or not the gut is releasing larger molecules than are biologically acceptable. It concerns absorption of two complex sugars, mannitol and lactulose.

Mannitol is a relatively small molecule and should be absorbed, lactulose is larger and should not be absorbed significantly. The patient fasts and both sugars are administered simultaneously.

The information which can be gained is interesting:

In fact what is normally measured in the mannitol/lactulose ratio. A recent study published in the Lancet found that the lactulose-mannitol ratio was an accurate predictor of relapse when measured in patients with Crohn’s disease who were clinically in remission (Wyatt, J., et al., Intestinal permeability and the prediction of relapse in Crohn’s disease. Lancet, 1993. 341(8858): p. 1437-9).