A new study just published in the British Medical Journal (30th Aug 2012) underscores, yet again, the importance of lifestyle in remaining healthy.

There are also some interesting statistics buried in the paper.

For example, if you reach 75 years, you have a 50/50 chance of making it to 90! [all subjects included in the study were 75 and over and half were 90 and still alive when the study ended]

Also, staying fit and active emerged as easily the number one factor. Previously, I have emphasized the importance of diet—and continue to do so—but staying on the move (walking, swimming or working out in the gym) is the most important thing of all, according to this study at least.

What I like about these revelations is they come from a highly respected scientific research institute, the Karoliska Institute in Stockholm, Sweden. They are generally to be trusted, despite worldwide corruption and perversion of science by pharmaceutical industry’s hidden controls.

Most health factors have been studied in relation to aging but separately: for example the effect of smoking, overweight and so on. But this study is unusual in looking at the combination of risk factors. Also, it ran for a longer period: 18 years.

Among the previous studies that have included the oldest population (85 years and up), only four had an observational period longer than 10 years.

The Karolinska study followed nearly 2,000 individuals and studied the median age at death, based on vital status records from 1987 through 2005, and gauged their lifestyle.
Life span exceeded 90 years in half of the participants, as I said.

A low risk profile can add 5 years to a woman’s life expectancy and 6 years to a man’s.
Non-smokers lived an extra year, on average. Not all that significant (survival in former smokers was similar to that of never-smokers, suggesting that smoking cessation in middle age could lessen the effect of smoking on mortality).

Other factors associated with increased survival were female sex and higher educational level.

Even after age 75 lifestyle behaviors such as not smoking and physical activity are associated with longer survival, according to this study.

Worth knowing and following!

Note: you will read the value of a social network (belonging and having friends) in my own encyclopedia of healthy aging:

Learn much more about longevity here: 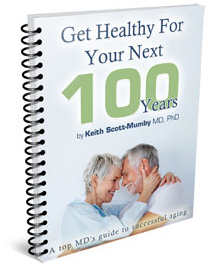