Men and Mental Health – Is Being A Man A Disease?

Obvious womens’ jokes aside, it appears that idiot scientists are trying to project maleness as a health problem!

According to a recent piece from that sanctuary of news and truth CBS News, a research review on men and mental health suggests that men who have “playboy” attitudes and believe in male dominance over women may face a higher risk for mental health trouble than men who don’t.

The fact they didn’t investigate the same phenomenon in women (which definitely exists) suggest a sexist bias to the whole investigation.

This rather pointless enquiry into so-called “traditional views” on masculinity, stems from an analysis of 74 studies conducted between 2003 and 2013, covering nearly 19,500 men, predominantly white males. 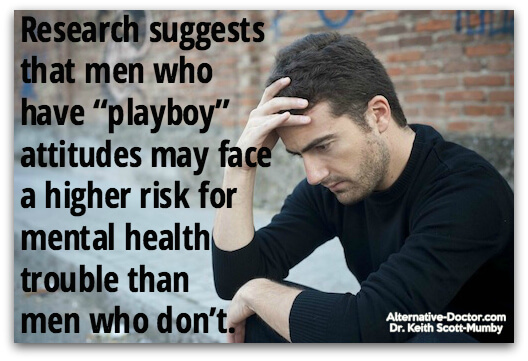 The researchers “looked at expectations about what it means to be masculine, and how that relates to mental health outcomes among men,” explained study lead author Y. Joel Wong.

“What we found overall is that the more that men conformed to masculine norms the poorer their mental health, and the less likely they were to seek mental health services,” he said. Wong is associate professor of counseling and educational psychology at Indiana University Bloomington

Wong’s team published the findings in the Nov. 21 online issue of the Journal of Counseling Psychology.

Most of the studies involved white males, ranging in age from preteens to seniors over 65.

Wong’s team focused on data concerning the embrace of 11 different types of so-called “masculine norms,” including the desire to win; to retain emotional control; to take risks; to engage in violence; to exert dominant behavior; to participate in a “playboy” lifestyle; to be self-reliant; to elevate work to the highest level of importance; to retain power over women; to maintain a disdain for homosexuals; and to pursue “status.”

In turn, an embrace of such norms was stacked up against the risk for developing a range of mental health issues, including depression, stress, body image trouble, and/or difficulty socializing with others.

In the end, the researchers found that men who adhere to masculine norms are generally in a worse state of mental health, and less motivated to seek psychological help. Key demographic factors, such as race, age and sexual orientation, were not found to have any bearing on the overall finding.

However, digging deeper, the team noted that educational background varied between studies, with a stronger association between the favoring of masculine norms and mental health problems seen among adults who lacked a college education.

So is this really a study of under-educated, dumb males, rather than of manhood as a disease? I think so.

Let’s get real: the analysis revealed, only four of the masculine norms were actually “significantly” associated with poor mental health. Those included a preference for retaining emotional control, promiscuous playboy behavior, self-reliance, and power over women.

Is it me, or is that Irish: Being self-reliant is good, is bad?

Wong also observed that conforming to masculine norms was more likely to be associated with being lonely, hostile or having problems socializing than it was to a risk for depression.

Of course the important point to reinforce is that what the study team observed was associations, rather than direct cause-and-effect between adherence to masculine norms and poor psychological well-being.

And also, Wong stressed, “The findings don’t allow us to answer the question as to why.”

He did have theories, however. “I would say that it could be that these norms are increasingly being rejected and thought of as outdated, which means some men might get pushback by people who are uncomfortable with these norms,” he said.

“For example, if you were maybe sexually promiscuous in the past, your partner might have just tolerated that. But today you might get pushback. So it could be much more stressful for a playboy today than it would’ve been in the past,” Wong said.

Of course it could be that the supposed standards of masculinity they took as “normality” are in fact nonsensical. I enjoy the feeling of being a full-blooded sexually active male and have done so since I conquered my childhood shyness. But I do not recognize in myself a tendency to violence, a disparagement of homosexuals or a wish to retain power over women (better consult with Vivien on that last one!)

Of course “playboy-ism” could be a comment on shallow, unattractive and over-assertive women. It is clear to most observers that that the “traditional” (to use the researcher’s term) role of women has been overthrown. Women may be marvels of multi-tasking and career management. But the amount of time spent fulfilling biological roles designated for them by nature has dwindled to a very pale shadow of what may be said to be truly “traditional”.

One could go on theorizing almost indefinitely. What seems clear to me—and everyone else—is that women have been dealt with very roughly by history.

I blame the Church. The so-called Abrahamic religions (Judaism, Christianity and Islam) have a very nasty attitude towards women, stemming from the Old Testament and its cruelty.

We should get rid of the priest classes that perpetuate this nonsense, not treat masculinity as a problem!

Perhaps the best thing to come out of this study is a reminder that sexism and injustice doesn’t just affect the victim; it’s bad for the offender.

The post Men and Mental Health – Is Being A Man A Disease? appeared first on Dr. Keith Scott-Mumby.