Now I’m back home for the winter, after the wonderful summer which included my 70th birthday…5-star luxury cruise of the Nile (see photos), I’m settling down to some work… No, really, I am. 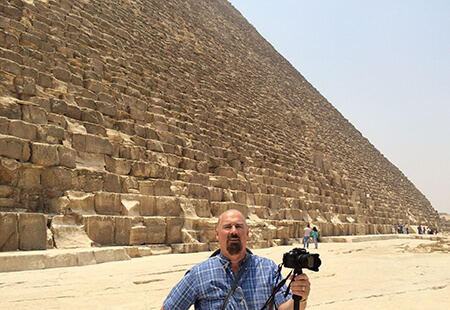 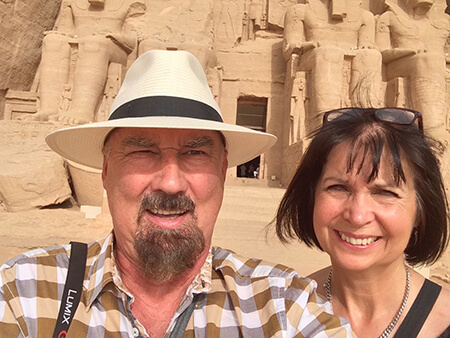 I have recently done a webinar (if you missed it, you can listen to the recording here)…

But, what’s it all about?

It really springs from my new super book masterpiece Medicine Beyond. I don’t want to shock you but it is w-a-a-y-y-y ahead of the curve. And I mean in science too, not just medicine. I paint you the picture of the conscious-derived universe in which energy, information and good things (like Love) rule the waves; the Cosmos is not (and could not be) a giant, mechanical device because, if it was, we wouldn’t be here!

The crazy old idea that a bunch of molecules just woke up one day and declared, “Well, I’m here! What’s next?” is just as crazy as I portrayed it. But that’s what science think you and me came from. It’s a very weird theory. In fact it’s impossible which means we shouldn’t be here.

But we are. And we humans ask questions and some of us don’t buy into crappy, simplistic answers.

One of the most outdated theories of science is gravity. We’ve talked about it for so long, we’ve come to believe it must be there. Just remember “gravity” was invented by Sir Isaac Newton, who had never heard of electricity, as we know it.

He called the strange force of attraction he measured “gravity”, because it made things “heavy”.

But it’s not needed. The picture of the world that’s emerged is that of an electrical, vibrant universe, alive with energies and information, in the way a cold clanking machine universe could not be.

The proof? It’s EVERYWHERE. Take a look at this picture of the beautiful Veil Nebula in the constellation of Cygnus, the Swan. Forget the “stuff”, you can SEE it’s electricity. Duh! Yet scientists continue to ignore its importance. Yes, it’s there, they say, but it don’t do nuthin’

But there is another reason this is important.

WE ARE ELECTRICITY. Living things are defined by electricity. For most of us it’s hardly noticeable, although in Medicine Beyond I do report some extraordinary cases of people who glow in the dark, can magnetize objects and can illuminate a light bulb just by holding it in their hand. This may even be the origin of the “halo” of holy people, though adepts can see the energy aura around almost anyone.

It’s not New Age, or “subtle” energy, it needs no skill… it’s just the person’s electrical field! You can measure it using superconducting detector devices. Forget all that hooey about “psychic skills”. It’s down to physics.

Not surprisingly then, electricity (well-managed) has a place in healing.

In 1757 John Wesley (1704-1791), the founder of Methodism, wrote in his diary of prescribing treatment with a specially made electrostatic machine for people “ill of various disorders: some of whom found an immediate, some a gradual cure”.

Catalogues of the General Electric Company in the late 19th century had a number of such devices. Its 1893 catalogue illustrates nine magnetos, ranging from one 20 centimeters long, boxed in pine, to the Phoenix, boxed in mahogany with a dial “to measure strength”. Assorted electrodes “for foot, tooth, and ear, with plated handles” were available for the device.

Yet, to listen to the “orthodox” view, you would think using electricity to heal was the biggest scam of all time!

There is no doubt that the early inventions did attract the “snake-oil merchants” but that does not justify dismissing the entire topic. As early as 1882, Silvanus Thompson, a fellow of the Royal Society and president of the Institution of Electrical Engineers, warned of the “gross impositions of the quacks and rogues who deal in the so-called magnetic appliances and disgrace alike the science of electricity and medicine while knowing nothing of either”.

Mind you, we shouldn’t worry about orthodox opinion… Lord Kelvin (1824- 1907), the greatest scientist of his day, declared that x-rays were a hoax!

Big Pharma Believes It Can Work

As I reveal in Medicine Beyond, electrotherapy has stood the test of time and is now respectable. Fools like Silvanus Thompson belong to the flat-Earth society of scientific frauds (FESSF).

Today, scientists at Johns Hopkins are working in this field, pharmaceutical giant GSK (GlaxoSmithKline) has people working on just this approach. The big boys don’t fool around with woo-woo nonsense.

The FDA is backing many projects to determine the value and best use of “electroceuticals” (so-called in line with pharmaceuticals).

Trust me, electroceuticals are here to stay and poised for the Big Time.

This is a huge paradigm shift in conventional medicine. Just a few years ago the idea would have been derided as absurd, that electrical signals could take the place of “real” medicines (drugs). Well, today the chemical approach has completely discredited itself. To practice medicine using only these tools is actually a serious degree of fraud by physicians.

If this sort of startling story of change and scientific amazement excites you, get yourself a copy of Medicine Beyond. It’s cover to cover with stuff like this!

Meanwhile, quietly and in the background, holistic medicine has developed a special version of electrotherapy, using gentle low currents and getting amazing recoveries. It’s a sort of homeopathic electricity!

You have heard me write in the past of the Russian SCENAR device. It operates on this principle: micro-current stimulation releasing on-board neurotransmitters, such as endorphins, serotonin and acetylcholine, etc.; a sort of on-board private pharmacy.

We call it micro-current therapy (MCT).

During my latest webinar on MCT, I interviewed two world-class experts, and good friends of mine, Drs. John and Lorraine Haché from Canada.

If you weren’t able to attend my webinar, you can click here for the replay! Get ready to be amazed by the amazing possibilities of this type of therapy!

“What a wonderful webinar, exciting, intelligent and extremely useful information. Thanks so much for this opportunity to learn more and find better alternatives to “normal” allopathic medicine.”