Microcurrent therapy (MCT) is now sweeping the world and mainstream medicine is catching on, as I predicted it would. I’ve christened it medicine’s greatest revolution… and it’s here.

There are many applications for very low current electrical healing. One particular modality of MCT: stimulating the vagus nerve, has been having AMAZING results in treating a variety of conditions, from rheumatoid arthritis to autism; from headaches and depression, to stroke recovery. Pain and inflammation are a cinch to solve too!

I’ll go into that in a moment. Let me first say that this is no whimsy or holistic fantasy. Big pharma companies have entered the game; Glaxo-Smith-Kline put up $50 million for research and development of a vagus nerve stimulation device (Medicine Beyond, p. 235). You can be sure no corporation is going to do that unless there is something to it! They want dollars; not a fairy story!

The orthodox way of tackling this is to implant a tiny microcurrent device right on the vagus nerve, in the neck. We don’t need to be that crude. We have a holistic way of stimulating the vagus nerve without surgery.

With that said, let’s see how it works and what can be achieved…

What Does The Vagus Nerve Do?

The vagus (10th cranial nerve) is the body’s main parasympathetic pathway. It’s a HUGE nerve that reaches almost all organs of the body and stretches from the skull to the far end of the bowel, with branches to liver, kidneys, pancreas, heart, lungs, etc. (see diagram) 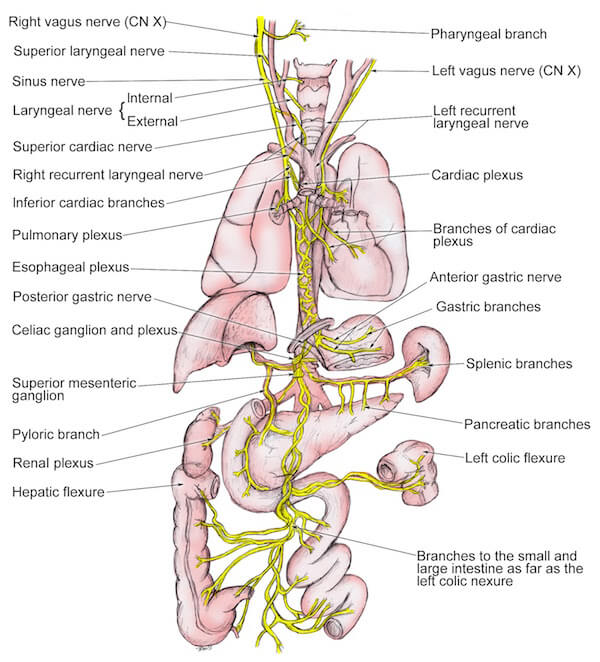 Path of the vagus nerve (yellow)

Parasympathetic function is that of calming and soothing. It’s the exact opposite of “fight or flight” stress and anxiety and has been characterized as “eat, sleep and digest” (falling asleep on the sofa after a heavy meal; you know the feeling, when you’re too lazy to get up and answer the door!)

This calming influence is highly anti-inflammatory. So if we can jazz the vagus nerve and make it fire off, its effect will be to shut down blood flow, swelling and inflammation.

Well, guess what? That’s exactly what happens. Animals given a lethal cocktail of inflammatory cytokines, equivalent to the “cytokine storm” that kills people with sepsis, would naturally die. But if their vagus nerve is triggered repeatedly and then the cytokines are administered, nothing happens. Nothing at all! The animals go on feeding and playing as if nothing had happened.

Going on from there: by now you know that pain is over 90% inflammation. So if we jangle the vagus nerve bell, you would expect pain to go away, and… again, that’s exactly what happens. Back aches and headaches clear up; musculo-skeletal damage is reversed and pain of many different colors and shades are dramatically reduced or eliminated.

The FDA here in the USA has approved microcurrent devices for pain relief. That’s a major step in the direction of holistic healing and is milestone for my model of “Medicine Beyond” (beyond the ordinary laws of physics and biology).

See below for a little more exact science on MCT. Meantime, let me share a new and remarkable clinical trial with you. Turns out MCT, using the vagus nerve trick, is great for stroke victims!

Stimulating the vagus nerve (VNS) with mild electric pulses relays information about the state of the body to the brain and encourage it to reorganize in a process called neural plasticity. This technology could help improve the lives of hundreds of thousands of people who suffer weakness and paralysis caused by strokes.

VNS already has been approved by the U.S. Food and Drug Administration as a treatment for certain other neurological illnesses, such as depression and epilepsy.

The study, published in the journal Stroke, marks the first time that VNS has been tested in individuals recovering from stroke.1 According to the American Stroke Association, nearly 800,000 people in the US alone are stricken by strokes each year (152,000 cases pa. in the UK).2 Eighty percent of stroke survivors are impacted a weakness on one side of the body that could last a lifetime. Oral drug therapies have shown little success in reducing impairments and disabilities.

The latest study was carried out in Glasgow, Scotland, UK. It was only a small series but the excitement and potential goes far beyond the number of participants. Of 20 patients who experienced arm weakness due to stroke, the participants were randomly placed into two groups: one with patients who only received rehabilitation therapy, and one with patients who received rehabilitation therapy as well as VNS experimental therapy.  The therapy was six weeks long for both groups.

The group that only received rehabilitation improved by an average of three points on the Fugl-Meyer assessment scale (which measures recovery in stroke patients).

The group that received rehabilitation and the VNS experimental treatment improved by an average of nine points.

MCT is also referred to as Microcurrent Electrical Neuromuscular Stimulation (MENS). As the name suggests, a very low-voltage microamperage (millionths of an ampere). This current used in microcurrent therapy is much smaller than the previously recommended currents for clinical treatments.

I introduced the world to this therapy in a big way in my earlier book Virtual Medicine, with the announcement of the Russian SCENAR device, which I billed as “Star Trek medicine for the future” (A phrase plagiarized by that hack writer Marc Sircus).

Microcurrent was first used in the 1980s for stimulating bone repair in non-union fractures. There are numerous studies published on the effects of single channel microcurrent showing that it dramatically increases the rate of healing in wounds and fractures. There is one study showing that microamperage current between 10 and 500 micro amps increases ATP (cellular energy) production by 500% in rats.

This is not to be confused with TENS machines, which are poor medicine. They work against pain by damaging the nerves, so they can no longer transmit pain signals. But the negatives are not worth the gain and TENS is now seriously discredited.

Now the SCENAR is just one among many devices. The finest on the market today I consider to be the Avazzia model (Avazzia Pro-Sport III for practitioners and professionals).

A 2001 article in the American Journal of Pain Management, published the findings of Health Care Practitioners on a total of 500 patients who used a leading micro-current therapy device.3 Some of their amazing results are as follows:

You can join in a whole informative webinar I held recently with two of the world’s leading MCT practitioners and educators: John Hache and Lorraine Vanbergen-Hache. Follow this link, strap yourself in, and be prepared to be amazed! There are STUNNING illustrations of recoveries that are so rapid as to be near-miraculous!

You also need to get up to speed on this whole field of advanced electronic and energy medicine, as described in the book Medicine Beyond. You can do this at my upcoming LIVE EVENT. Be sure to book yourself in now. There’s still an early bird rate (ends Dec 31st), sign up here.

Join The US Clinical Trial!

If you live in the Dallas area, you can propose yourself to become a part of a new trial. A key factor in the new study is that it is double-blind, placebo-controlled, and at multiple sites, which is the highest standard for a clinical trial.

Dr. Robert Rennaker, Texas Instruments Distinguished Chair in Bioengineering, director of the Texas Biomedical Device Center and chairman of the Department of Bioengineering, tells us:

“We are seeking several stroke patients in the Dallas area, each of whom will receive a VNS device as well as physical rehabilitation. We are looking forward to bringing this technology to U.S. patients for the very first time.”

Don’t let that last remark confuse you: it may be new to him but it isn’t to me!

[Dr. Rennaker assures us that, although it is placebo-controlled, all patients will eventually receive the device and the full therapy]

Finally, if you haven’t read Medicine Beyond, leading the charge into the new brand of medicine, you need to get yourself a copy. You can do that by clicking here.