Could This Be An Actual Anti-Aging Suggestion?

A little potpourri* this week! First, a sensational, rather amusing suggestion for anti-aging; you’ll never hear this one from a regular doctor!

I’m serious. I came across a reference in my New Scientist, to a study published in the Journal Of Clinical Investigation, which showed that mice wading in bleach for 30 minutes a day aged dramatically less.

The researchers were looking at inflammation which, as you know, is the number one aging process in our bodies.

Doctors have known for years that diluted bleach alleviates inflammatory eczema, though nobody knows why. It’s not sterilizing the skin: the concentrations they use are less than that of swimming bath water.

Maybe it stems inflammation? The authors of the study speculate it may block a chemical NF-kB, which recruits inflammatory cells. Apparently bleach rips electrons off and that’s a way to denature anything. Heck, that’s how chlorine dioxide solution (Jim Humble’s MMS) works: it looks for positively charged substances (pathogens), rips the electrons off and so neutralizes them.

The team, at Stanford University in California, had irradiated mice wading in dilute bleach water for 30 minutes a day for 10 days and then assessed the result. They called it the mouse “spa treatment”! It was very effective at lowering the inflammatory response.

Reference: Journal of Clinical Investigation, doi.org/p46
*potpourri, French originally: a mixture of flowers, herbs, and spices that is usually kept in a jar and used for scent: a miscellaneous collection of anything; an intellectual mix: a collection of miscellaneous literary extracts; any mixture, especially of unrelated objects, subjects, etc. Synonyms: melange, pastiche, hodgepodge, mishmash, patchwork.

While mentioning the New Scientist, let me share something else I learned from that journal: fungus furniture! Again, I’m serious. New Scientist is holding a Christmas competition and the prize is a fungus chair.

It’s made from the Reishi mushroom (Ganoderma lucidum). The massive block you see is the part that grows underground (the mycelium). These can be very massive indeed; the largest living organism on Earth is a fungus mycelium, growing in Oregon. It now covers 2,200 acres and is 3.5 miles across! 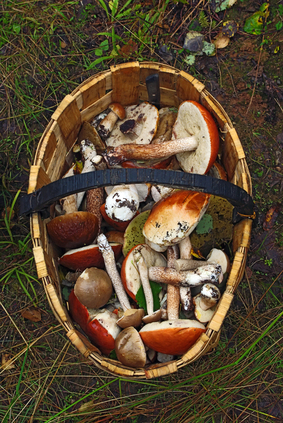 The creator of this fungus furniture is Phillip Ross from San Francisco. He uses a black plastic bag pressed tight against the soma which cuts off gas exchange, prompting the fungus to form a leather-like layer to encase itself.

The furniture fungus is then killed, so it won’t invade the home. It’s treated at 670 and coated in lacquer, so spores can no longer form.

No worries about durability; these will outlast normal wares, says Ross.

Ganoderma (Reishi or Lingzi mushroom) is a formidable health ally. It’s an anti-aging, attacks cancer, modulates the immune system, wards off heart disease, calms the nerves and relieve both allergies and inflammation.

It seems that mushroom therapy can help against cancer in 4 specific ways:

Different compounds found in Reishi are responsible for each of these effects.

The Japanese government officially recognizes mushroom cancer therapy as a treatment, whereas in the USA, it’s just a folk cure hoax! Go figure.

Cancer Meets Its Nemesis With Mushrooms

OK, enough of the frivolity (well, it is the holiday season). Let’s do cutting edge medicine.

Reprogramming human blood cells has put an end to cancers we thought were incurable.

In March 2013 Michael Sadelain at the Memorial Sloan-Kettering Cancer Center in New York announced successfully treating 5 cases of acute lymphoblastic leukemia (ALL) with genetically-engineered immune cells from the patients own blood [see, genetic engineering has many uses other than growing dodgy food crops!]

One of the patients recovered in just 8 days. Sadelain would probably argue that’s the power of the treatment, though I would want to argue that it’s due to the magic of Nature.

You know I have always said that, ultimately, all successful treatments are going to have to follow Nature.

Since then a further 11 people have been put into remission. Several other cancers are being looked at.

What is new is the idea of training the body’s own immune cells to fight cancer. We all know that cancer is basically a disease of the immune system; it stops protecting the individual and cancer gains a foothold. Cancer is a sign your immune system is dangerously low, most often due to nutritional starvation.

The latest techniques teach T-cells to target cancer cells, while leaving healthy cells untouched. The trouble is that ALL affects B-lymphocytes, also part of the immune system.

That’s why it’s so deadly. So Sadelain programs the T-cells to wipe out all the B-lymphocytes, whether healthy or not. Then a marrow transplants restores the healthy cells.

The T-cells are already there, armed and waiting, to wipe out any rogue B-cells which appear.

This Is Essentially A “Living Drug”

Well, they would use terms like that, wouldn’t they? But I’m OK with this term; it’s true!

Several drug and biotech companies are developing these therapies. Penn has patented its method and licensed it to Switzerland-based Novartis AG. The company is building a research center on the Penn campus in Philadelphia and plans a clinical trial next year that could lead to federal approval of the treatment as soon as 2016.

Talking with the researchers, “there is a sense of making history…a sense of doing something very unique,” said Hervé Hoppenot, president of Novartis Oncology, the division leading the work.

Lee Greenberger, chief scientific officer of the Leukemia and Lymphoma Society, says, “From our vantage point, this looks like a major advance,” he said. “We are seeing powerful responses…and time will tell how enduring these remissions turn out to be.”

It’s a bit high tech, admittedly. But this is better than the ghastly chemical approach.

But you know…and here’s the kicker: fever cures ALL quite often.

We see increased survival time in children with ALL after a high fever. Unfortunately, most ignorant doctors panic when the fever comes on. They immediately book more chemo, because the immune system “isn’t working”. That effectively blocks Nature’s wisdom.

Fever Can Cure ALL

My idea would be to create a fever if possible; and sweat it out (not meant to be a pun), watching the child’s temperature soar and yet do nothing. It’s a hard discipline!

But doctors are missing the powerful insight this effect brings. They go on using the “it’s busted” model, instead of shouting “Hooray!” when the fever comes on.