Neurotherapy & More About Your Brain

Those of you who follow my work and have seen my video “Who Needs a Brain?” on YouTube, or read last week’s newsletter arguing that the brain cannot possibly do the job that science ascribes to it, might wonder if I am trying to say the brain is worthless.

We all know that’s not true. If you get too much brain damage, you can observe the effects. Loss of cerebral cortex will produce little change or harm; people with 98% of brain tissue missing can still think and remember normally.

But if the vital centers are damaged, such as the speech area, or motor control, the person will be paralyzed or have difficulty speaking. The important point I am making is that the brain is not the be all and end all of cognition and thought.

Really, I am saying that mind and being is outside the brain.

But we need our brains to connect!

The best model I know was suggested by Larry Dossey, MD: the brain is like a radio receiver. You use the radio set to “tune in” to the radio station of your choice. If it’s well tuned, you can hear loud and clear. BUT THAT DOESN’T MEAN THE RADIO STATION OF YOUR CHOICE IS INSIDE THE RADIO SET! Duh!

Also, you can fool around with the parts and distort or alter what you hear on the radio. Again, that does NOT mean the radio station is inside your radio set. Yet that’s what modern science claims: you can stimulate or tweak bits of the brain and get distorted perceptions, so that PROVES all thinking and awareness is coming from the brain and only from the brain. I call this the brain-based-being model (B3).

It’s time to drop the brain-is-all folly. Conventional science can’t take this leap because it thinks our Beingness is all mud-and-molecules as I like to term it.

Their core belief (it is a belief, not science) is that a bunch of mud-and-molecules woke up one day and said “I’m here!” and that was the start of human intelligence. I don’t think so! It doesn’t even make sense.

The point is—and they can’t slick talk their way out of this riddle—is that even if particles, atoms and molecules did gradually become organized into a neurological machine, that is not to say that non-material consciousness wasn’t there, all along, guiding the process.

No, not God! The human mind! If you believe in manifesting, telepathy, out of body, remote viewing and all that stuff, you will accept that the human mind has what we call “agency” (the ability to make things happen; cause and effect). 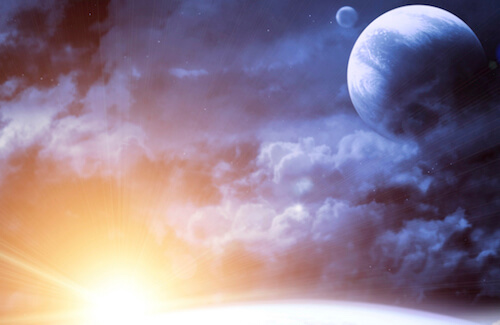 Did our universe come from thought, as the Ancient Tibetans claim?

Think about that: I just gave a good explanation for the origin of the universe! Why not? Find a hole in that theory if you can; I’d love to hear from you. But you won’t. You’ll only object or join the materialists with their “it couldn’t have been” objections.

Trouble is, scientists don’t know any logic or reason. They just kid themselves and call it science… You know, “Professor Big Cheese said its such a way and so that must be true,” kind of thinking.

But The Reverse Is True

So listen up now… this is important. For many people we have to tweak the brain, to help their thinking processes. This is no different from servicing or upgrading a radio set, or buying onto a network with more bandwidth for your phone and tablet!

This is not addressing the spiritual dimension at all. We are just adjusting the tuner!

So it is that people with ADD, OCD, Alzheimer’s, narcolepsy and so on often have brain issues and by addressing these we can put the person back in touch with their own real inner world. More importantly we can get them re-connected with outer reality, so the look, sound and behave normally.

It looks miraculous sometimes but not when you have the correct model in mind. Talking by means of a moving image of ourselves across the world was sci-fi fantasy when I was a kid. Yet now we do it all the time, via a simple hand-held device. It’s amazing but it’s not a miracle. We know how it’s done.

On my shelves I have a book on LENS technique by Stephen Larsen PhD. He’s a psychology professor emeritus at SUNY Ulster but also author of The Shaman’s Doorway and The Mythic Imagination, so decided out in the left field, for a psychologist.

LENS stands for low energy neurofeedback system and those of you who have read my books Virtual Medicine and Medicine Beyond will know I am very clear on the power of low-level energy to cause biological changes (as opposed to the orthodox idea that if some is good, more MUST be better. It isn’t).

In fact low energy systems are the ONLY way to bring about beneficial changes in physiology, especially frequencies in the so-called ELF range (extreme low frequencies, 5 – 150 Hz or so). More just overwhelms and confuses the body and brain.

Neurofeedback began in the late 1950’s and early ‘60’s through the work of both Dr. Joe Kamiya at the University of Chicago and Dr. Barry Sterman at UCLA.

Dr. Kamiya was studying consciousness, and discovered that by using a simple reward system people could learn to alter their brain activity. This was the first ever EEG neurofeedback training.

Along similar lines, Dr. Sterman ran an experiment to see if cats could increase what is called their sensory motor rhythm (SMR). A simple machine gave them a food pellet every time they ‘got it right’, and they quickly learned to control their brainwaves to get the treat.

Later Sterman showed that cats given SMR control training were immune from toxic overload from exposure to lunar lander fuel. As a result, NASA began to train their lunar Astronauts to control their brain’s SMR rhythms. Fifty years later, neurofeedback is still part of the Astronaut training program.

Sterman moved on to train SMR in humans to control their epilepsy; 60% of his subjects reduced their seizure level by 20-100%, and the results lasted.

Unfortunately, or fortunately, depending how you look at it, neurofeedback was adopted in the 1970s by the woo-woo element and lost some of its respectability. As one writer put it, conferences were attended by two people in orange robes for each one in a white lab coat!

As a result, neurofeedback became an unpopular choice for career-minded neurophysiology researchers. Though the empirical data proved that neurofeedback clearly worked, it couldn’t possibly work under the scientific beliefs of the time and “therefore” was nonsense.

Now, of course, things are different. Neuroscience has come to accept the interrelation between the central nervous system, the immune system, emotional, physical, and mental health. It is now conceded that the brain can change at any age, and that we create new neurons throughout life. Brainwave monitoring and training your brain to better things is no longer ‘experimental’.

Moreover, with the advances computer software and brainwave monitoring equipment, neurofeedback practitioners now have affordable precision tools. With 50 years of independent development behind it, the methods have become highly sophisticated, and highly effective.

Today neurofeedback is used for peak performance by professional sports teams, Olympic athletes, and business people. It is commonly used as a non-drug solution for brain injury recovery, ADHD, post-traumatic stress, and emotional conditions of all sorts.

Everyone has heard of ADD and ADHD. It affect boys more than girls, about 8:1.

Neurotherapy is a simple, safe, often highly effective and—like changing someone’s diet—should be the FIRST line of attack, rather than flooding the young patient’s body with toxic, little understood and often poorly-workable medications.

I was astonished when a child patient I know recently went to Daniel Amen’s famous facility and was offered toxic drugs such as Ritalin as an appropriate treatment, instead of neurotherapy. There are those who are severely critical of Amen’s methods and they may be right. Having this experience, I would never send anyone to Amen or his licensed hucksters.

Thing is, this is argued to be BACKWARDS by people who know most. Although the condition appears to be one of agitation and over activity, those who brain map and offer neurotherapy to hyperactive children tell us that the over-activity is only an apparency.

The real problem is that parts of the brain are dull and going to sleep (rather like narcolepsy) and to compensate for that the patient is twitching and restless, merely to stay awake. As a neurofeedback colleague I was with this weekend put it “You can’t fall asleep while you jog!”

It’s the complete reversal of orthodox thinking. That makes me comfortable!

Just remember, we need to tune the brain for best performance… the best YOU!