This week heralds something very special. I want to help redefine YOUR life in a way which will excite you… a life of abundance and joy. That’s my ultimate definition of true health.

But what do we mean by abundance? It’s an over-worked word that’s kicked around, often by people who clearly have no concept of true abundance.

This is better than just slogan mouthings. It’s real. It has a brilliant definition, which I will come to shortly.

I have created an online sensational series of free videos that will expand your whole view of living and Being. There are 14 videos so far and I plan to do m­ore. Eventually, I will market it as a life-changing course but right now you can access it for no charge and I’d like you to join me in reviewing it.

One of the questions I am already asking, from peoples’ preliminary reactions, is: would it be better to release the course one video at a time or does it work if I just give the link to all 14 videos at once? The latter could seem overwhelming, there is so much new knowledge in this series. Maybe dripping it, one video every few days, makes it easier to manage?

You will get all the videos at once. Let me know how you feel about this.

The 12 Channels Of Being

The secret to this new view of living is working with my 12 Channels of Being, so-called. Originally I used the term “12 Zones of Responsibility”. That seems to sum it up also.

I have partitioned life up into zones or themes, which give a clearer, deeper picture of how we live. You’ll learn them in detail on the course, but these “channels” (energy flows) are inner self (mind and spirit), outer self (body and creature self), romantic sexual urge, family (protoplasm line)…

Channel number 5 is called Your Place in The World. That seems to me a more important concept than how wealthy you are. Will you leave the world a better place, for you having lived in it?

Anyway, rather than just listing them all here and risking that you may think you know it all, or misunderstanding what I am saying, why don’t you go to the videos now and watch the first one. That should get you in the mood for watching the next, and the next… and so on.

The question I am asking at each level is WHAT WOULD ABUNDANCE LOOK LIKE?

So… an abundance of inner self. What does that mean? Or an abundance of romantic sexual urge? Not lots of sex, that’s for sure. More a case of having a rich, loving and prosperous life with the person you choose as your significant other. I would also add that you have done well, left a clean mark, if all your exes are still friends with you and no bitterness.

And what about an abundance of the material world, what’s that?

Actually, if you want abundance, real ABUNDANCE, consider the universe that Creation has given us! Out there we can see a hundred billion galaxies (give or take!) Every galaxy has a hundred billion stars or more. And these are only the ones we can see. By definition we can only see objects when light from them reaches us.

The universe is so inconceivably vast that, as it expands outwards, there is a “light horizon”. Beyond that we can see nothing. But it does not mean there is nothing there. There could be trillions of billions of galaxies over this “light horizon”.

And that’s only our ONE humble universe (uni- means one). String theory, so-called, predicts 10500 universes at least, with an infinite array of physics, chemistry and biology. If each of them had a hundred billion galaxies… well, you get the idea. How much abundance do you really want? Ha ha!

Just look up at the sky one night—or look at some pictures from the Hubble telescope—and ponder for a moment: what kind of a place are we living in? 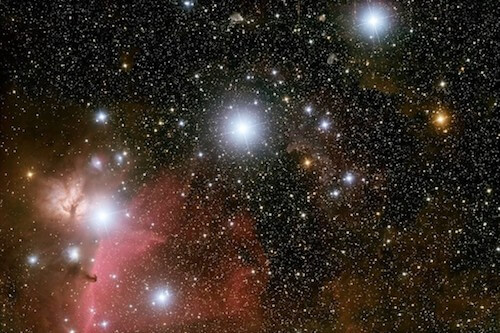 It’s more than awesome (awe originally meant creating fear, wonder, reverence and overwhelm). There simply are no words to describe our home here among the stars!

It’s important to understand that most of the 12 Channels of Being are human in scale. It’s about US, as conscious, aware beings, living in a playground called the space-time continuum!

There is also the question of arranging these Channels graphically. That gave me years of thought and experiment. The idea of a stack, one above the other, is simple enough. But that puts the self at the bottom of the pile and, actually, the inner world of self is top of the pile. It’s what puts everything else there!

So I tried concentric circles, working outwards from the self.

Then I got a better idea: to arrange these Channels like a clock. I’ll explain what I chose as the final arrangement, and why, in these videos.

OK. I hope that whets your appetite for a real, witty and-dare I say—very wise new way of looking at life.