If you haven’t heard about the link between the length of your telomeres and cancer, you need to keep reading.  The longer you put off making radical (but necessary) changes to your personal eating plan, the faster your body will age.

Want to Age Slower?  Take Care of Your Telomeres

DNA regulates most of the metabolic processes which go on in our cells – it’s your genetic messenger.  If those DNA messages become damaged, or corrupted, then the cells may begin to behave weirdly.

Telomeres are strands on the ends of our chromosomes that are supposed to prevent this decay process.  They protect chromosome ends from being mistaken for broken pieces of DNA that would otherwise be fixed by cellular repair machinery.

Every time our cells divide, our telomeres shrink.  When they get short enough, our cells no longer divide and our body stops making those cells.  Over time, this leads to aging and death.

Babies have lots of an enzyme called telomerase, which repairs the telomeres, but we lose that steadily through time as well.  It seems to be inactive in normal adult cells.

The Link Between Telomeres and Cancer

One of the reasons cancer is seen increasingly as age advances is that telomere loss makes it more and more likely to occur.

Interestingly, cancer cells have elevated levels of telomerase enzyme and so can continue to repair their telomeres.  Cancer is able to continue vigorously growing and dividing.

Cancer cells are better at survival than our normal cells!

The telomere mechanism is crucial to aging, though many would not accept that this is the cause of aging so much as a result of the aging processes (such as oxidative damage), which certainly decreases the telomere count.

A few aging cells isn’t much of a problem. 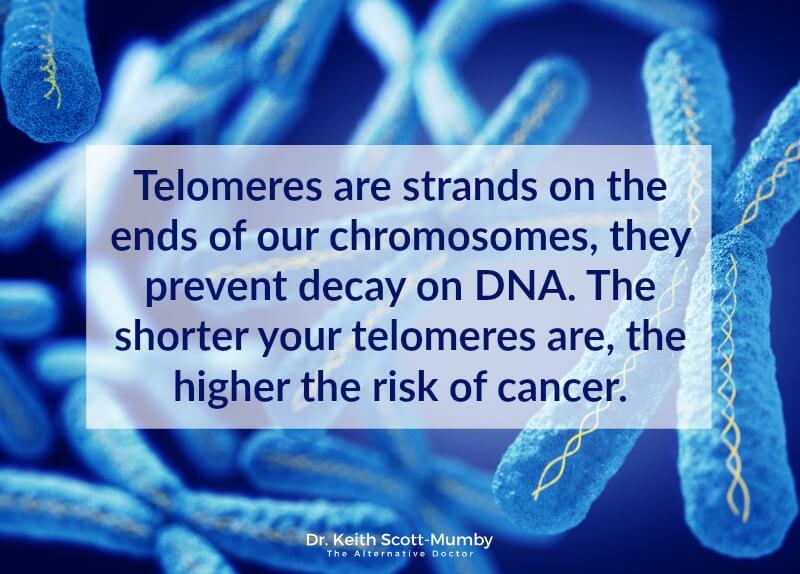 But a startling new July 2010 study now shows that people who accumulate a lot of cells with short telomeres have a greatly increased risk of fatal cancers.

Compared to people at the top third of average telomere length, those at the bottom third have a threefold higher risk of cancer.  Those in the middle third have twice the cancer risk as those with the longest telomeres.

For 10 years, Willeit’s team followed 787 residents of Bruneck, Italy, who received all their medical care at the same local hospital.  Ranging in age from 40 to 79, all were cancer-free at the beginning of the study.

A decade later, 92 of the study participants had developed cancer.

At regular intervals, the researchers calculated the average telomere length of each participant’s white blood cells.  This led to a number of interesting findings:

“Of note, telomere length was preferentially associated with individual cancers characterized by a high fatality rate such as gastric, lung, and ovarian cancer – but less so with tumors linked to better prognosis,” explained Peter Willeit, MD, of Austria’s Innsbruck Medical University.

The evidence was clear…the shorter the telomeres, cancer risk was higher.

You can boost your telomeres by up to 30%, according to an article published in the Lancet journal in 2008, by following judicious lifestyle changes.

The program used in the study:

The important take-away here is not what the lifestyle changes were, exactly, but that if you care to make sensible changes, you will benefit from it in increased longevity.

One study of centenarians (men and women older than 100) showed they had significantly longer telomeres than average people.

A Note About Carbohydrates

One of the absolute benchmarks for longevity is keeping carbs under control.  Specifically, having a lower blood insulin than average.  A great deal of research indicates that if you lower the carbs, you’ll not only increase your longevity, you’ll increase the quality of your health.

Carbohydrates are very powerful in their damaging effect on our bodies.  Grains are farmer foods and not natural to a hunter-gatherer creature, such as we are in evolutionary terms.

No matter what changes you make to your overall diet, limiting your carbs (both simple and carbs) is going to keep your insulin levels in check.  This is good for all of you!

There’s Work to Be Done!

You might not have known what telomeres are…now that you do, it’s time to really work to protect them (and make them longer).

They are critical to how you age (and how long you live).  The link between healthy (longer) telomeres and cancer risk is significant.  Keeping your telomeres from degrading should go at the top of your anti-cancer plan!

Substantial lifestyle and diet changes are the key to longer, healthier life.  That’s what my book How to Live Beyond 100 Years is all about!