Quiz Question What Is The Surprise Diagnosis?

Let’s see how much you know. Pretend I came to you with this symptom and asked you what to do!

Here’s the story: the patient is me (truly, this happened to me yesterday afternoon). I was sitting in a restaurant on the shores of lovely Lake Lucerne (photo), eating a plate with Parma ham and melon salad–a mix of watermelon, canteloupe and honeydew, drizzled with a balsamic dressing. It was delicious. 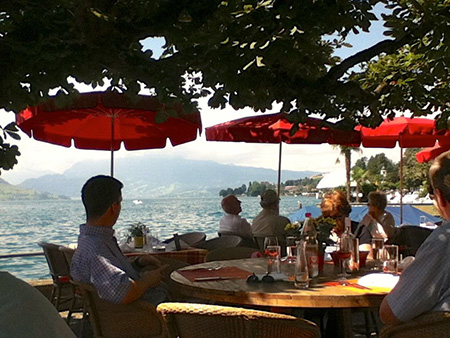 Suddenly, there came a sharp pain in the side of my cheek. Gosh, I thought, a fish bone spike! Then I realized that was silly; but it could have been a spicule of bone from the ham. I felt it with my tongue and it seemed soft and small.

Nevertheless, the pain rapidly increased until I was forced to borrow a pair of lady’s tweezers from a fellow diner and dash to the restroom.

It was too dark to see much in the toilet so I literally groped blindly with the tweezers inside my mouth and, after a few minutes, got lucky. I pulled something out and the pain lessened a little.

Back outside in the sunshine, I could see a strange object: it was a tiny soft round sac, about 3 mm in diameter, with a little spiky “tail”, another 2.5 – 3 mm long. It reminded me of a small piece of berry fruit with a spike, called a drupe (like in a blackberry).

All was suddenly clear!

YOUR QUESTION: what is the diagnosis? (what was this object?) and what two treatments should you always have with you, for casual emergencies, that would have made this immediately more comfortable for me?

It was a bee sting! The strange object I removed from inside my cheek was the actual sting. That meant it was a bee: the bee loses its sting when it is activated. The bee dies.

But I did not have a bee inside my mouth; trust me! The bee sting arrived on the salad. I called the attention of the management to this unfortunate event and they were profusely apologetic. The boss arrived, very concerned and offered me compensation. I was quite sure at that point that they knew. I think an employee must have swatted the bee hovering over the melon salad, killed it, that pushed out the sting and… lucky me!… I got to swallow it. Most people don’t know that a bee sting is detachable.

But here’s the second part of the question: what two simple remedies should you always have with you, that would have made me more comfortable?

Rescue remedy (Bach flower remedy) and homeopathic Traumeel. Rescue Remedy is great for shock and upset of all kinds; worth taking. Traumeel is an OTC remedy, widely available, designed for traumas of all kinds.

Unfortunately, I had neither with me! Ouch! But if I had, I would have asked for a glass of water, dropped a Traumeel tablet in it and then added 10 drops of Rescue remedy. That’s for sipping slowly over an hour or so. It would have made a big difference. As it was, I had to take the cable car back up the mountain to my apartment, feeling very sore inside my mouth!

The post Quiz Question What Is The Surprise Diagnosis? appeared first on Dr. Keith Scott-Mumby.