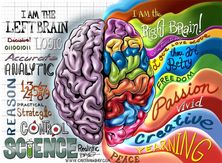 Nevertheless, there is widely held belief that people use one side of their brain more than the other, and that this influences their personality traits. For example, left-brained people are said to be linear, logical and detail-oriented, while right-brained people are creative, caring and thoughtful.

We need both sides equally and what really matters for optimum performance is integrated right and left brain function, plus lowered brainwave states. Alpha is especially relaxing and whereas theta is more relaxing still, you could not drive or use computers and machinery while in that state.

Integration of brain function is easily influenced by modern audio equipment, such as binaural beats or isochronic tones.

The right- and left-brain thing is simply a myth. It was started, remember, by Roger Sperry looking at the function of severely damaged brains, with the corpus callosum severed (the bridge between the two brain halves). Sperry got his Nobel prize but this anomaly has nothing to do with how healthy, intact brains actually function.

Now a new study from the University of Utah simply confirms what I have been saying. Brain scans show no evidence that people are predominately right- or left-brained.

For the study, neuroscientists analyzed brain scans from more than 1,000 people, aged 7 to 29, and examined thousands of brain regions for indications that people are more likely to use either the right or left side of the brain, but found no signs that this was the case.

The metaphor and language of so-called right brain thinking and left brain thinking is harmless enough and, in any case, it’s not going to go away. But for the good of your soul, know the truth!

The study was published in the Aug. 14, 2013, online edition of the journal PLoS One.