The Birth Of Cosmic Medicine

I’d like to spend this week’s newsletter going way, w-a-y outside the box with you! Let me talk about the projected new edition of my masterwork Virtual Medicine. It’s 15 years since I wrote it and a lot has happened in that time.

I’m hard at work updating it and I know from the flood of letters I got that many of you enjoyed my hugely expanded review of DNA and its properties. I shared that DNA isn’t just a chemical photocopier.

It can send out signals, which can turn chicks into ducks, revives dead seeds, caused an elderly lady to start re-growing her teeth and allowed animals to survive a fatal dose of a poison which destroys the pancreas. In fact they grew a new pancreas and ended up fully healthy animals.

If you haven’t seen it yet, it’s a simple download from this page (you don’t need to give your email address and you can forward it to anybody you like!)

Well, there is a lot more to come. For example expanded views of the phenomenon of death (as opposed to the experience of it), field mechanics, resonance mechanics, information theory, reverse entropy, extended mind, electrical nutrition, the Electric Universe model, how the Matrix concept applies in the real world and…as the salesman would say…much, much more!

I’ve had decided to rename it “Cosmic Medicine” for reasons which will soon become clear.

If you Google Cosmic Medicine, some funny things come up! For example, bacteria from outer space and, on PubMed, I found reference to this: COSMIC (COPD and Seretide: a Multi-Center Intervention and Characterization).

But you know what I mean: healing, health and life in the widest possible arena of being– the universe, consciousness, and all that is.

In the original book, the last chapter, I speculated on where science was leading us and posed some pretty hefty questions.

This new work (for indeed it is almost all new) addresses these deep questions and comes up with surprising answers to these important concerns.

So naturally, it has grown a great deal and in two directions specifically:

Early readers who follow my writings will remember it all started with a conversation I had with Jacques Benveniste about an experiment in which he sent the electromagnetic “imprint” of curare thousands of miles across the Internet killed a bunch of mice (not actual curare, just “virtual curare”).

I occurred to me that we had, at that moment, entered a new age and I wanted to be part of it.

I also wanted to beat Robin Cook (author of Coma and Brain) to be the first write a thriller about a murder in which someone switches on a computer, with a pre-programmed electronic “cyanide” message and croaks as a result!

That would be a hard crime to solve, especially in this climate of science. 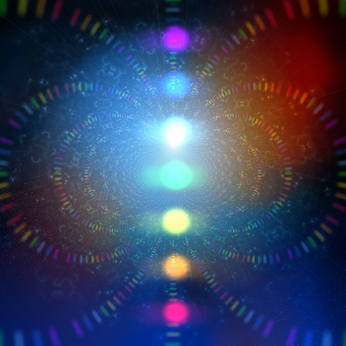 If virtual substances can have a biological effect then healing remedies, too, could work in a non-material or “virtual” sense.

It was a magnificent new day dawning and my humble efforts at round up all the science to make it more credible, though now primitive with hindsight, at the time seemed worthy and were certainly very new.

But question lingered. One of the most obvious ones to me was: if we can take a virtual aspirin for a headache, will we get virtual side-effects?

Another was this: if a person has a real-time deficiency of magnesium, how is administering virtual nutrition going to make up the real world deficit?

The Matrix is an idea that has become so firmly entrenched in the current societal psyche that many are wondering if it could be true. One of our top philosophers and someone I admire, David Chalmers, has even taken it seriously enough to write a university paper on this view of reality entitled “The Matrix As Metaphysics”!

But real reality, or the world as we know it, has similarly come unstuck from its mooring ropes and the result is hazy, very Unreal and, frankly, rather challenging.

It appears that what we see, feel and touch, everything we experience, is but a concretion of consciousness into denser forms and energies. What has been considered actual reality doesn’t even exist, never mind rule over US all.

It’s only perceived to exist. From the viewpoint of consciousness it is virtual, like a dream, but from the viewpoint of experiencer in this very solid plane of existence seems real. Truth differs depending on whether you are viewing from a higher spiritual, soul, mental, emotional or bodily perception.

I wrote about this Alice In Wonderland universe in my sensational book To Fly Without Wings. It’s the perfect antidote to so-called logical positivism, the arrogance of modern science (plus it’s a lovely, lyrical read, and reveals a TON of stuff, not like The Celestine Prophecy, which reveals next to nothing).

Get yourself a copy here and learn to fly without wings!

A Word About Truth

Truth is a tricky concept at best, bright as shining gold, yet slippery as an eel’s coils.

Attempts to suborn it to scientific study have proven very unsatisfactory, almost comically so. There is a method we call science. I applaud it—to look, to investigate, to speculate and theorize, then to attempt proofs or, if no proof is forthcoming, to revise the theory and continue trying, in a spirit of humble enquiry.

But the idea of science as a body of knowledge called the truth is plain laughable. As I said in the first edition of the book, our view of the world is changing fast.

Two of the grandest and most revolutionary theories of this century, Einstein’s Relativity and Planck’s Quantum mechanics, are in such disharmony that they appear mutually exclusive. Everyone knows they both throw Newton’s staggeringly successful mechanical world out the window.

It is a disconcerting fact that electricity and magnetism, two of the absolutely fundamental building blocks of the universe, are so little understood that, at the deepest level, science cannot explain the nature of these energetic phenomena or how they exert their effect.

I point out these absurd contradictions in case the reader is under the illusion that science, in any meaningful sense, understands our world. It doesn’t.

My greatest complaint with so-called science is not that it is sometimes wrong but that it fails to acknowledge that whenever something cannot be shown to exist using the standard narrow approach, it is labelled ‘unscientific’ and therefore a fake or delusion. There is never any suggestion that the problem may be the fault of science or its inadequate methodology.

Yet 100 years ago there was no way to detect radio waves. Did that mean they were an ‘unscientific’ belief, if anyone had come up with the idea ahead of its time? Even more importantly, could it be said that because the science of the day failed to detect such a phenomenon that therefore radio waves did not exist?

This kind of think we call “scientism”, meaning an obsessive delusion with the preeminence of science.

Rupert Sheldrake, who features in the first edition of Virtual Medicine, has written a brilliant Philippic (almost a diatribe) on the follies of scientism in his latest book, The Science Delusion, called Science Set Free in the US (2012).

You may know his TED talk video on this very theme was banned. Blocking a video these days is equivalent to book burning in the old days: something that Inquisition, the Nazis and the like were fond of…but modern scientists? It’s beyond shameful.

But it does mean they know they are against the ropes. A win on a technicality by Sheldrake!

Meanwhile, the forces of light and healing are at the doors of scientific despotism, hammering at the barriers to reason, love and compassion. It’s the Battle Of The Karmas (just made that up…but I like it!)

Cosmic Medicine is coming soon, to a amphitheatre near you!

That link once more for To Fly Without Wings: www.TheNumberOneWish.com

To the triumph of reason and light,