The End Of Modern Medicine?

It could happen. If we lose our range of effective antibiotics and create antibiotics resistance, we’ll lose a lot more too: no more sophisticated interventions, like organ transplants, pacemakers, joint replacement and care of preterm infants, will become more difficult or even too dangerous to undertake.

Minor wounds and trauma will once again become life-threatening issues, as they were a hundreds years ago. I will NEVER forget an ancient specimen in the medical school museum in Manchester, England, where I trained: it was the dissected esophagus (gullet) of a man who had swallowed a fish bone. It had penetrated through to the chest cavity… fatal! There were no antibiotics to save him.

I can always imagine the man sitting there, having a family meal, he accidentally swallowed a fish bone and that was suddenly the end of his days. He ended up a “specimen”, instead of a live, feeling human being.

It gave me the chills when I first saw it and now there is reason to shudder again. I’ve more than once had a fish bone lodged in my throat; have you? Well, look out, because without effective antimicrobials, that could once again prove fatal.

I’ve said it before and I’ll say it again: the Golden Age of Antibiotics is over. The 60-year window of safety is closing fast. Thousands die every day of infections that are no longer responding to antibiotics. Moreover, it’s getting worse by the week.

Yet misconceptions about antibiotics and the health threat posed by antibiotics resistance are common around the world. The findings from a multi-country survey from the World Health Organization (WHO) released Nov 16th are pretty scary.

Nearly 10,000 adults were tested for their knowledge of antibiotic use and antibiotic resistance. It was conducted in 12 countries (two countries per WHO region): Barbados, China, Egypt, India, Indonesia, Mexico, Nigeria, the Russian Federation, Serbia, South Africa, Sudan, and Vietnam. Among the common misconceptions highlighted by the WHO:

Two thirds (66%) believe individuals are not at risk for a drug-resistant infection if they personally take their antibiotics as prescribed. Nearly half (44%) of respondents think antibiotics resistance is only a problem for people who take antibiotics regularly.

Nearly two thirds (64%) of respondents believe antibiotics can be used to treat viruses, and one third (32%) believe they can stop taking antibiotics when they feel better, rather than completing the prescribed course of treatment.

More than half (57%) of respondents think there is not much they can do to stop antibiotics resistance, and 64% believe the medical community will solve the problem before it becomes a serious threat.

The Real Killer Is That Antibiotics Resistance Can Affect Everyone

Well, I’m sorry to bring the bad news. But there is NO SIGN of the medical community solving the problem, either soon, or ever. Life is wily and organisms even as small as bacteria have the real knack of finding their way past blockades imposed by our very limited range of antimicrobials.

But here’s the real killer: nearly two thirds (64%) say they know antibiotics resistance is an issue that could affect them and their families, but how it affects them and what they can do to address it are not well understood.

Release of the survey findings coincides with the launch of a new global WHO campaign, “Antibiotics: Handle With Care,” during the first World Antibiotic Awareness Week, November 16 to 22. The aim of the campaign is to raise awareness and encourage best practices among the public, policymakers, and health and agriculture professionals to avoid the further emergence and spread of antibiotic resistance, the WHO said.

“The rise of antibiotic resistance is a global health crisis,” Margaret Chan, MD, WHO director-general, said during a media briefing. “Antimicrobial resistance is on the rise in every region of the world. We are losing our first-line antibiotics. This makes a broad range of common infections much more difficult to treat, and replacement treatments are more costly, more toxic, and need much longer durations of treatment,” she noted. 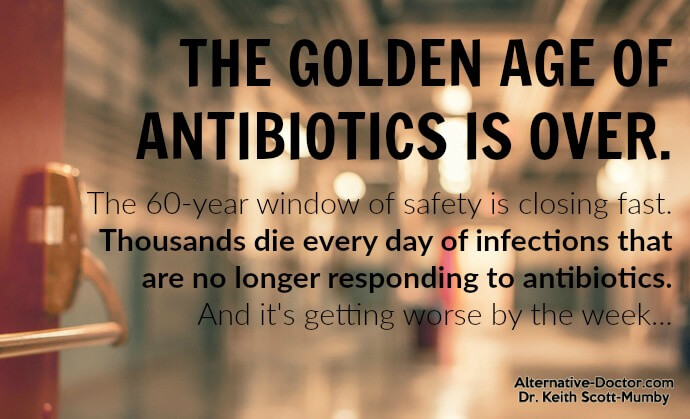 It’s come to the point where I can say this: ignorance of alternatives to antibiotics can—and very likely will—be the cause of your death and that of those around you.

There may creepy elements in the world, who would like to see a “population thinning”, but this is not the way to go about overpopulation. If we had a pandemic of the proportions of The Bubonic Plague of old, the BILLIONS of decaying bodies that would litter our cities and streets would, themselves, be a major health hazard (it is estimated that three out of five people died of the “Black Death” in fourteenth century).

People could be fit and well in the morning, breathe infected droplets exhaled by a victim, catch the disease within hours, and be dead by bedtime.

And don’t be foolish and think cannot happen today. You would be wrong.

We are now being troubled by a version of MRSA, the notorious resistant hospital bug, that affects people in the same way as The Plague. There have been many instances of someone alive at breakfast time and dead by nightfall. It’s called “community-associated MRSA” because it has already escaped from the confines of hospitals and is stalking YOU and your kids.

According to Margaret Chan of the WHO, “With few replacement [antibiotics] in the pipeline, the world is heading towards a post-antibiotic era in which common infections will once again kill.”

But it’s not all bad news.

There is a great deal you can do to protect yourself. You just need information, knowledge, and the right know-how. You won’t learn that from conventional doctors because they cannot think outside the box.

But I can! It’s what I do best. My sizzling book “How To Survive In A World Without Antibiotics” will tell you all you need to know. There are countless safe and yet effective workable alternatives to antibiotics—and I don’t just mean boosting your immune system; I’m talking about substances that KILL microbes.

There are fungal extracts, herbs, inorganic chemicals, homeopathics, biologicals like propolis and colostrum, infusions you can drink, Marine Quinton, 3 powerful and proven antibiotic vitamins, viruses that feed off bacteria (and kill them), even electronic devices that can zap bacteria and other microbes. Plus lots more to learn, such as homotoxicology, UV light and lasers.

It’s a FEAST of knowledge. This is a book that should be on every bookshelf.

Get your copy here!

Finally, I have to say this: DON’T WAIT. If someone in your household falls prey to a deadly, resistant bacteria, there isn’t time to go Googling for information. I have already explained, you could have as little as a few hours to make a difference. You need to be forearmed and prepared.