The Mysterious Jane Austen Death – What Killed Her?

Vivien and I have been real fans of Jane Austen, since forever! Like most of the civilized world, we drooled over what I usually describe as “The Greatest Love Story Ever Told”.

Why, the Colin Firth version of Pride and Prejudice, by Jane Austen, of course! Screenplay by Andrew Davies. And yes, I do rate it above Romeo and Juliet.

Here’s the wonderful couple dressed for their part in that superb production; the script, the houses, the costumes and the scintillating dialogue between these two make it probably the best-ever adaptation of a book. And… the most amazing part of all… it was written long ago (1813) by a little, insignificant spinster-of-the-parish in a tiny unknown English village… that is, until “First Impressions” was published, with the new title: Pride and Prejudice.

She was a sensation. Now Jane Austen is without much doubt the most famous novelist of all time. 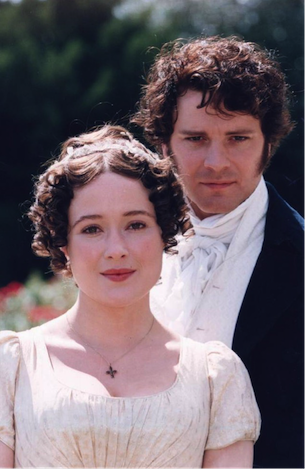 Colin Firth and Jennifer Ehle play Mr. D’Arcy and Elizabeth Bennet,
the headstrong couple who finally manage to hit it off, despite their differences.

Our quiet little author, with such a devastating wit and keen sense of observation, is like a character straight out of her own novels. Even when successful, she remained poor. She had her share of suitors but all faded away again, without her being married. Her family went bankrupt and she reputedly fainted when told she had to give up her home, furniture, horses, everything. So she knew of unrequited love and the “poor relation” scenario that recurs over and over in her stories.

The Prince Regent (later King George) asked for an inscribed copy of her best-selling book and she famously told him to get lost—she hated his public self-indulgence and was not about to toady up to a future king!

Finally, Ms. Austen died tragically young of a mysterious disease. More of that in a moment. She is today more beloved by the English-speaking world than she could ever have imagined (and a little bit of that being due to Colin Firth’s smoldering portrayal of her most famous character, Mr. Fitzwilliam D’Arcy, gentleman).

Pemberley, D’Arcy’s fictional home, is pretty much famous too: it has it’s own website and several derivative novels.

Vivien and I Go Visiting

Seeking relief from the nightmare of coltish computers with “attitude”, I took a half-day with Viv and went to look at Jane Austen’s home, in Hampshire. It’s in a little village called Chawton, barely a half-hour from my brother-in-law’s home, where we have been staying.

Here’s me and Viv at the front door. The flowers we bought for Jane, who has given us so much pleasure over the years. 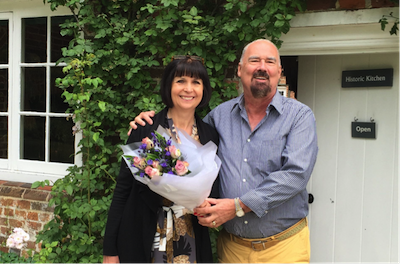 And I couldn’t resist a shot of the famous table where she sat and wrote her masterpieces. It struck me as very tiny indeed, until I remembered I’ve written several books on a space much smaller… a laptop computer! 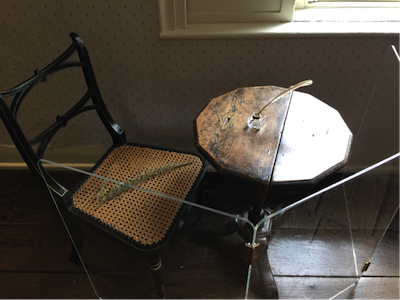 It was very touching to be so close to such a wonderful creature, even though she is long dead. To look at the little brooch here, a souvenir there, some embroidery she had done (she was pretty good at that), a small portrait by her sister Cassandra, copies of moving letters and testaments to her worthy life and the manner in which she died, all made her own character “leap from the pages”, as it were, and become very real.

The Jane Austen Death, A Mystery

Despite her fame, no one is really certain what Jane died of. This is partly due to the fact she was somewhat reclusive; she was never part of the glitzy upper-class lifestyle she mocked so eloquently.

The second reason is that the medical science of the day was pretty poor and had none of the sophistication of today’s disease classifications and pathology. We are left with just a few clues, almost all of these from Jane’s own writing about herself—letters, etc.

The main features of Jane Austen’s last illness seem to have been its insidious onset, starting about a year before the mysterious Jane Austen death, intermittent weakness and languor, gastric upsets, and discoloration of the skin. Sir Zachary Cope wrote an article for the British Medical Journal in 1964, in which he discusses what we call the differential diagnosis, which includes pernicious anaemia, myasthenia gravis, and cancer of the stomach, but many doctors will probably agree with him that the most likely condition is Addison’s disease of the suprarenal glands.1

We know that she began to have a feeling of weakness or tiredness round about July 1816, and within a few weeks she experienced severe pain in the back, for in a letter dated 8th September she wrote to her sister saying:

“Thank you, my back has given me scarcely any pain for many days. I have an idea that agitation does it as much harm as fatigue, and that I was ill at the time of your going away from the very circumstance of your going.”

That comment is noteworthy. Three months later (16th December) she refused an invitation to dinner, giving as a reason: “I was forced to decline it, the walk is beyond my strength (though I am otherwise very well).”

A month later, in a letter to her friend Alethea Bigg, she confesses for the first time that her illness is serious:

“I have certainly gained strength through the winter and am not far from being well; and I think I understand my own case now so much better than I did, as to be able by care to keep off any serious return of illness. I am more and more convinced that bile is at the bottom of all I have suffered which makes it easy to know how to treat myself.”

“Serious return” and “all I have suffered” are significant words. The self-diagnosis of “bile” most likely indicates some gastro-intestinal irritation, probably nausea or vomiting or both.

So she could have been seriously anemic and cancer of the stomach the probable cause of that.

There is little else to go on, until in a letter dated 23 March 1817 and written to her favorite niece Fanny in which we find important evidence:

“I certainly have not been very well for many weeks, and about a week ago I was very poorly, I have had a good deal of fever at times and indifferent nights, but am considerably better now and recovering my looks a little, which have been bad enough, black and white and every wrong colour. I must not depend upon ever being blooming again. Sickness is a dangerous indulgence at my time of life.”

She was evidently distressed by her changing facial appearance. Her comment that she does not see herself ever blooming again is sad, don’t you think?

On 22nd May she wrote to her dear friend Anne Sharp a despairing letter, which however, contains several important clues.

“In spite of my hopes and promises when I wrote to you I have since been very ill indeed. An attack of my sad complaint seized me within a few days afterwards – the most severe I ever had and coming upon me after weeks of indisposition, it reduced me very low…. My head was always clear, & I had scarcely any pain; my chief sufferings were from feverish nights, weakness and languor.”

The increasing lassitude and weakness might make us suspect myasthenia gravis, but in this disease we should expect some interference with speech or with chewing of food or even swallowing, and we should not expect the gastro-intestinal disturbances. Another disease that begins insidiously and has intermissions is sub acute bacterial endocarditis, but in this disease gastro-intestinal attacks are uncommon and severe fainting crises rare or unknown.

I think this is beginning to sound like possible kidney failure (urea is very toxic to the gut) or, more likely, adrenal failure (so-called Addison’s disease), typically due to tuberculosis at that time. Jane’s mention of “feverish nights” made me think at once of the drenching night sweats which are almost diagnostic of TB (are doctors taught all this stuff today I wonder?)

Addison’s disease, as such, was unknown in Jane’s time and there was certainly no blood test for it. But Thomas Addison (1793-1860), after whom the condition is named, found one symptom that was virtually diagnostic of adrenal failure and that was the change in skin color.

The skin changes to a darker color, usually brown but sometimes almost black, and the face was nearly always affected. In some cases the dark patches of the skin are mingled with areas showing a lack of pigment – a true black and white appearance.

In a letter of 23 March 1817, Jane lamented that her looks had been: “black and white and every wrong color.”

I think that nails it. If this surmise be correct, Jane Austen did something more than write excellent novels – she also described the first recorded case of Addison’s disease.

Jane’s final hours on the night of the 17th of April were, thankfully, fairly calm. According to her beloved sister Cassandra, who nursed Jane to the very end, “She was in a state of quiet insensibility by seven at the latest. From that time till half past four, when she ceased to breathe, she scarcely moved a limb.”

Final Footnote: interestingly, JF Kennedy also had Addison’s disease, also reputedly due to tuberculosis. He was kept alive by steroids until his assassination in 1963. Jane Austen lived and died long before the rise of modern medical science. But her brilliant words live on, in book and film!

God bless you Jane! You brought more happiness than the equivalent of the Earth’s weight in pills and potions.