Too Much TV Kills

I used to love those American things, where somebody calculated that every passionate kiss took 7 minutes off your life!

Well, apparently, every hour of TV will knock 22 minutes off your life! Mind you, American TV is so dire it takes away the will to live! Ha ha…

But this research is from Australia. They found that people who averaged six hours a day of TV lived nearly five years less, on average, than people who watched no TV.

In fact, for every hour of television watched, lifespan fell by 22 minutes.

The statistics suggest that too much TV may be as dangerous as smoking and lack of exercise in reducing life expectancy, the researchers said.

For example, smoking can shorten of life expectancy by more than four years after the age of 50. That represents 11 minutes of life lost for every cigarette and that’s the same as half an hour of TV watching, the researchers said.

Of course it’s the old “correlation is not causation” argument: the study did not show that TV watching caused people to die sooner, only that there was an association between watching lots of TV and a shorter lifespan.

There could be a number of reasons for this association. Watching TV, people are inactive, they eat mindlessly (over-eating and the junky sort of TV dinners) and so gain weight.

It could also be that people who watch a lot of TV are a certain personality type. Maybe they are naturally lonely and depressed and these conditions may be the real cause of the worse mortality? I’ve said it often enough and given it great prominence in my book “How to Live Beyond 100 Years.” Lack of human contact and emotional interaction definitely shortens life (I was joking about losing the will to live above but that may even apply to such sad people).

In the study, researchers used data on 11,000 people aged 25 and older from the Australian Diabetes, Obesity and Lifestyle Study, which included survey information about how much TV people watched in a week. Researchers also used national population and mortality figures.

Without TV, researchers estimated life expectancy for men would be 1.8 years longer and for women, 1.5 years longer. 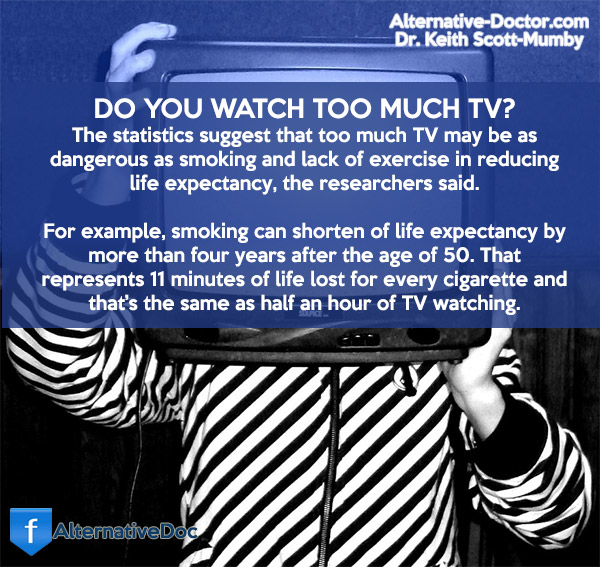 The post Too Much TV Kills appeared first on Dr. Keith Scott-Mumby.