Vitamin D determines the function of more than 2,000 genes in the human body.

It is a miracle vitamin that has been scientifically proven in one study after another to boost your overall health!

Your skin produces fat-soluble vitamin D (which is technically a steroid vitamin) in response to the sun. It is an essential nutrient that your body uses to metabolize phosphorous and calcium. Bone abnormalities such as osteoporosis (fragile bones) and osteomalacia (soft bones) are higher in people who are vitamin D deficient.

Even More of a Reason to Get Your Vitamin D!

Now, scientists have discovered that vitamin D is not only critical for continued good health but it may help those who have trouble breathing due to asthma and chronic upper respiratory infection (URI).

Asthma claims the lives of more than 3,000 people every year and almost 26 million people are currently living with the disease – 7 million of those patients are children. Worse, the number of diagnosed cases (likely due to rampant toxicity in our environment) rose by 28% over ten years.

There is no cure for asthma. It is caused by inflammation (the source of so much disease) that makes the airways of the lungs constrict, making it difficult to take in oxygen.

In a review of more than 4 million asthma patients, Dr. Ronit Confino-Cohen and her team at Tel Aviv University relied on doctor-based evidence of attacks rather than patient reports to evaluate the correlation between vitamin D and asthma. They then monitored the vitamin D levels of more than 300,000 patients over four years.

Dr. Confino-Cohen explained, “Most of the existing data regarding vitamin D and asthma came from the pediatric population and was inconsistent. Our present study is unique because the study population of young adults is very large and ‘uncontaminated’ by other diseases.” 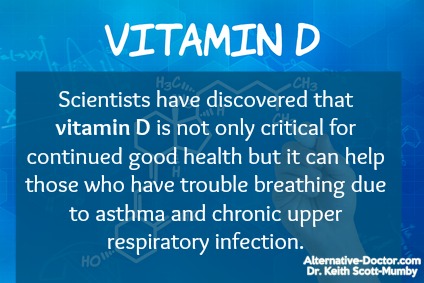 Removing those patients who were obese, smoked, or had a secondary chronic disease, the team narrowed down the primary factors that influenced asthma episodes.

Their study, published in the medical journal Allergy, determined that asthmatics who are not getting enough vitamin D have a 25% higher risk of having an acute asthma attack.

They will continue their research but Dr. Confino-Cohen stated, “Our results support a recommendation for screening of vitamin D levels in the subgroup of asthma patients who experience recurrent exacerbations [increase in severity]. Increasing vitamin D levels is something we can easily do to improve patients’ quality of life.”

The study conclusion states, “There is a considerable amount of evidence that implicates vitamin D as a factor associated with various chronic lung diseases.”

In other words, if you have asthma (or experience chronic respiratory issues that result in trouble breathing), get your vitamin D levels checked!

Where to Get Vitamin D

Yes, you can get vitamin D from food sources such as fortified dairy products, fatty fish, and eggs. However, the best source has always been and will always be the sun!

No matter what the sunscreen industry tells you (with their cancer-causing chemical soup they like you to rub all over your body), safe and smart exposure to the sun for fifteen minutes a day will give you all the vitamin D you need (and then some).

For those who live in colder climates where access to the sun’s rays isn’t possible throughout the year, a dietary supplement will be required.

Soak up some rays, eat vitamin D-rich foods, or take a supplement but do not allow your stores of this essential nutrient to disrupt your body functions! There is no reason to live with trouble breathing, mood disorders, or a compromised immune system.

Get your vitamin D!