Understanding Emotions – Are You Emotionally Intelligent?

Emotions are an energetic coloring to a person’s thoughts and actions. You can see and feel a person’s emotions. They are physical. Not like thought.

A person may be reluctant, hesitant or careful. The person may want to withdraw, like fear, anxiety, sadness and despair. Such a person is controlled by energies.

Or there may be very positive energies, such as enthusiasm and excitement; the person is active and wants to engage. He or she bounds around. This person is using and even creating energies.

In the middle are people who are hostile, bored or angry. They tend to bump energies away. They neither engage nor interact with them; just try to resist or STOP them.

The bored person is an interesting study. He or she can easily be nudged in either direction by their boredom. If something interesting comes into view, they brighten up. If there is a continued lack of stimulus, he or she will start getting critical and pretty soon antagonistic.

The important point about understanding emotions is that nobody does your emotions for you!   The absurd belief that “You upset me” or “You frightened me,” is nonsense. Emotion is something you do to yourself. Nobody can do it for you. NOBODY! Period.

So the first step towards a transformed and better life is to get rid of all that nonsense language. Stop blaming other people for your emotions! Don’t say, “You make me angry.” Say “I make myself angry.” But of course most people are not so honest, so better just to keep quiet.

But if someone says, “I am sorry I upset you,” you must not persist in the lie. Be honest and say to them, “You didn’t make me upset. I did that to myself! You burnt the dinner. But it was my decision to get upset about it.”

The most important person to convince of this important truth is yourself. You need to start looking at yourself and seeing yourself make your emotions. The neuro-linguistic programming people (NLP) have a great questioning approach: “How do you DO anger? What changes do you make in how you feel and how your body behaves to make yourself angry?” That nails it firmly in place, when he or she sees they are responsible for their own emotions (agency is the scientific word). 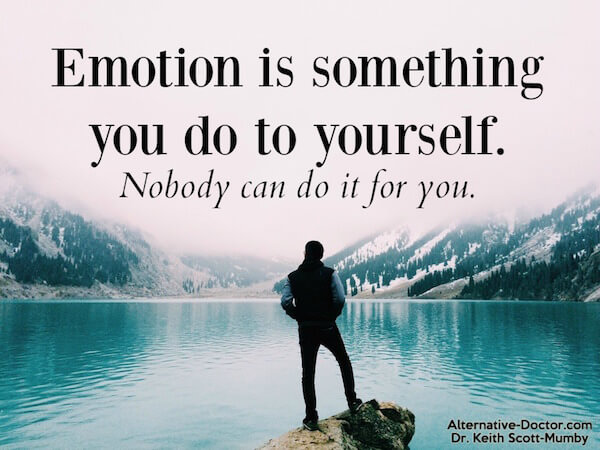 These are great booby traps when it comes to integrated, rational happiness and the accompanying positive emotions.

You must be careful not to buy into other peoples’ values and what they think you should react to or their definition of happiness.

Friends, peers, relatives and other “adults” can infuse us with ideas that are not our own, about what constitutes the good life. We buy into them and they become thought viruses. Our mindset is infected with the same faulty notions that theirs are (after all, viruses are seldom healthy).

So we party too much, eat too much, drink too much, spend hours addicted to Facebook and other websites, watch pornography and dress in what is supposed to make us look smart and sexy.

We spend money to impress others that we are good guys. Our car is chosen carefully, because of the statement it will make, about who we are, how much we earn and, again, how truly clever we want to appear to those around us.

It’s a crazy system of values, which undermines almost all rational choices in life. Yet, ironically, some of the really successful people don’t buy into this mindset at all! They know better.

David Cheriton, the Stanford professor, who has an estimated net worth of $1.3 billion (from Google shares), hates the idea of living like a billionaire. “I’m actually quite offended by that sort of thing,” he told the press in a 2006 interview. “These people who build houses with 13 bathrooms and so on, there’s something wrong with them.”

Carlos Slim Helú, the richest man in in the world, was worth $73 billion as of March 2013. But he still prefers to live a simple life. He is not a great spender and resides in a simple abode with 6 bedrooms. He even drives for himself.

And none other than Mark Zuckerberg, founder of Facebook, lives well below his means ($46 billion). He famously wears the same grey t-shirt and hoodie to work every day and reportedly drives an Acura “because it’s safe and not ostentatious.”

How do you DO happiness? In other words, what does it feel like? What mental and bodily signals tell you that you are happy? Most people have never stopped to think about this. One of the questions we use in the workshops is “How do you know when you are happy?”

Take a shot at defining these good feelings; make a list!

It’s a great question to address. We all think of it as creating a warm, fuzzy feeling or peace, relaxation and safety. There’s something else too; that slight touch of magic that is hard to define but close to a sense of being at one with ourselves.

That feeling we call Eigen resonance. It modulates stress and fear; it seems somehow right; it brings self-worth and rationality; it has a kind of worthy comfortableness. Beyond that, it gets increasingly hard to define.

A Mechanical Definition Of Happiness

It is having all parts of one’s life in balance and harmony with all others parts, so that there are no conflicts, tensions, failures, inconsistency or confusion. Without this balance, you are often working against yourself. Have you ever had this feeling?

Note: rational integrated happiness and sanity are identical. Rationality is the key to happiness. Wanting or needing things that don’t make sense is the true nature of stress.

Corollary: one is happy in proportion to the degree co-ordination and alignment that one can bring to the different zones of responsibility and life energy that we call our 12 Channels.

The message, for this part, is that you will be far happier if you learn to bring all your activities into alignment. Congruent behavior is more rewarding and less stressful to the individual. Even to realize that one’s life has fallen into ruin and be ready to do something about it is congruence. To not care or wish to repair the damage is not congruent; to pretend there is nothing wrong when in your heart of hearts you know all is not well—that too is not congruence. To blab and boast you are doing well as a front for failure, that too is not congruence.

On the other hand, to celebrate yourself, to rejoice in the life you have led so far and savor to the full the dazzling and varied array of possibilities and delights for the future. That’s true congruence! 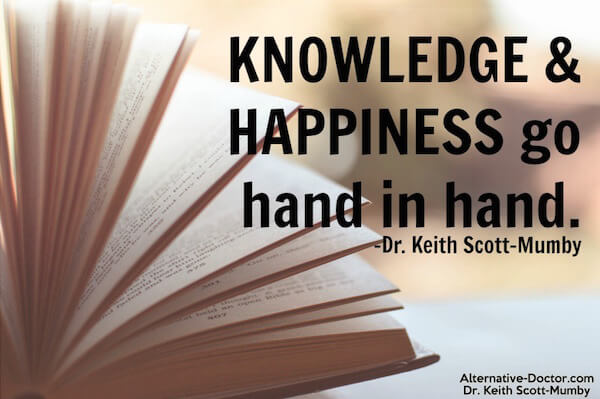 It is sometimes practical to discriminate between short-term happiness and long-term happiness. Why? Because the two things can get into direct conflict. Short-term issues can jeopardize long-term rewards and success.

Now here is a peculiar thing. It shouldn’t be so, yet it happens. It seems we (Mankind) have trouble accepting this simple observational truth, because time and time again we go for the short-term fix and jeopardize the long-range attainment of rewards and happiness.

The psychologists talk these days about emotional intelligence (EQ). There isn’t much to distinguish this fine-sounding variable to behavior except one important facet. Emotional intelligence means having the wits and reason to delay gratification—to wait for something better to come along. Generally those who behave stupidly and destructively do so for some short-term calculation. It is only in the fuller context the damage can be recognized. But by then it is too late; the individual couldn’t wait.

Typical short-term happiness would be that found in drugs, alcohol, promiscuous sex or the supposed benefits of crime. The feelings of apparent power, supposed well-being, illusory happiness and fake self-esteem attained in such ways are only very temporary. Generally the long-term payoffs, such as imprisonment, AIDS or early death, are a disastrous antithesis to true happiness.

Broadly speaking then, short-term happiness is a relatively poor deal. Better to go for the lasting version.

Long-term values would come from such achievements as acquiring meaningful skills in life; helping others; a happy marriage or relationship based on romantic sexual love; solid wealth built by hard work based on giving values to others; lasting health; raising capable, self-directed and productive children; personal integrity and the control of ones emotions. Note also that every single one of these values depends on relevant knowledge.

But sex? Of course, sex too! Good sex depends on knowing how to get good mutual arousal and orgasms. You have to “know” each other. Know means sex in The Bible: Adam knew his wife Eve and she became pregnant (Gen 4:1). There are reportedly 950 other mentions of knowing meaning sex.