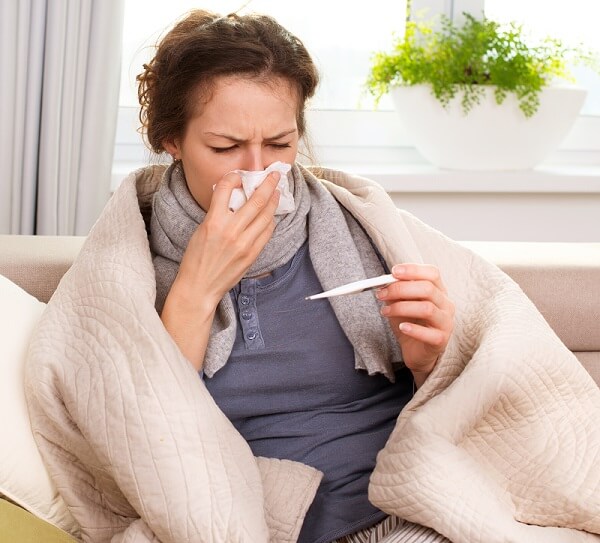 My lovely wife Viv just had a bad cold. Talking with her about this very simple health condition made me realize there is knowledge I need to pass on to others. It’s easy to forget something as trivial as the common cold, while we are pontificating about bigger things, like heart disease, diabetes and cancer.

But a cold (often called the “flu”, though of course it isn’t), is surprisingly vicious while it lasts, making the patient utterly miserable and sometimes laying him or her low for a few days. Here’s what you can do:

First tip: don’t get colds! I never do. It’s all about good immunity. Also, see item 4, about losses.

Second tip: NEVER USE A HANDKERCHIEF! To blow your nose when it’s dripping or bunged may be very tempting. But it’s absolutely counter-physiological. What happens when you blow your nose or sneeze into a hanky is that there is a sudden violent positive pressure in the nasal passageways. That forces infected mucus (snot) into the sinuses alongside the airways. Once that happens you’re going to get sinusitis, and a simple 2- 3 day cold will now become a week-long prolonged struggle. It may even need antibiotic to shift it. You don’t want that.

Similarly, when you sneeze, don’t sneeze into your nose. It causes the same sudden positive pressure. Instead open your mouth and “sneeze” through your mouth. It doesn’t relieve the itch nearly as well. But if you avoid the yellow-green mucus stage, you’ll be glad you did it right.

Remember, animals sniff and swallow the mucus. That’s what we should do.

Dear Viv wouldn’t listen to this at first and was revolted by swallowing snot. But I reassured her is doesn’t get past the stomach. This time she did as I told her (she doesn’t always!) and for the first time it didn’t move down to her chest and become a nasty, hacking cough. So she’s learned a better way.

Third tip: you know the old saying “feed a cold and starve a fever”. It basically means take it easy, coddle yourself and it won’t blow up into something much worse (in the old days a “fever” was often a herald of potentially-fatal pneumonia).

Well, I have an about-take on this old saw: deliberately create a fever and the cold will only last a day. What you do is get into a hot bath, run the water hotter and hotter until it gradually becomes almost intolerable. Then leap out, swath yourself in several towels and jump into bed, under the duvet or blankets (this is an old East European remedy I ran into).

What happens next is that your temperature goes up and up. You will probably fall asleep… and then wake up cured!

Fever, most doctors forget, is Nature’s wise response to an infection. A fever is GOOD because it accelerates the immune system favorably, while disadvantaging the invader virus or bacteria.

So rather than suppress a fever, it’s good to encourage one. But we don’t want the nasty “wild” fever, triggered by bacterial toxins. Much better to make our own, “tame” controlled fever. It will hasten recovery and often bring it down to just a few hours, or overnight.

Fourth tip: ask yourself “What did I lose?” or “What shock?” It’s almost invariable that a sudden cold follows a psychic trauma. Really. You’ve just never been asked to look at it that way before and haven’t put the pieces together.

But I always ask this question. For myself it often means I can blow a potential cold before it gets properly started. Not that even that happens to me very often these days.

Once you recognize the shock or loss, talk it through with somebody. The faster you digest it and let it go, the faster your cold cure.

Fifth tip: is it really a cold? Allergic reactions are very common indeed and often manifest similarly to a cold—there is headache and sneezing, aches all over. But no fever! Arthur Coca MD, one of the great pioneers in the field of food allergy (back in the 1940s and 50s), used to have a saying “You don’t catch colds; you eat them!”

Just be aware that a lot of what passes for a cold is really a sudden systemic allergic reaction, with the nasal passages as a primary target. Instead of reaching for meds or even homeopathics, make a note of what you ate that was different.

Or get my book “Diet Wise” and do it properly. Get rid of the bandit foods and you’ll probably never get a “cold”. It’s 15 years or more since I last had one!

Sixth tip: homeopathics for rhinitis. Take Schussler salts, Ferr. Phos. (#4), which is generic for fevers. Gelsemium is good for a runny nose and sneezing (thus good for hay fever too). Take Gelsemium D6 or D30 if it persists. Phosphorus is good for a dry, hacking cough; take Phos. D6. Nat Mur (D6) is good for the dry, hot feeling and frontal headache that’s characteristic and finally, if the fever switches on, especially with a sore throat included, take Belladonna D6 (Deadly Nightshade).

You didn’t even need the Echinacea! (it rarely works for a cold)