Why is Bread Bad For You? The Hidden Death Factor

You know that I write a great deal about the inflammatory effects of foods. If you became the expert in just that one aspect of a healthy lifestyle, you could live long and be healthy (in cooperation with Mother Nature, of course!)

But, there is one aspect of healthy eating I rarely discuss. It came to mind recently and I want to share it with you. I call it the “dynamics of food” (as opposed to the composition).

My wife Vivien and I were sitting at breakfast with our good friend Jane Andrews, from Brisbane, Australia. We were just munching on delicious croissants; something to do with our love of France, I suppose.

We got to talking about the French diet, which we recognize as very healthy. Yet they eat croissants? They also drink lots of wine. What is their secret?

Books have been written on the “French paradox” (why they eat fat, drink lots of alcohol, munch wheat and yet stay damnably thin?). The French enjoy life and certainly do no worse than the rest of us. Endless fresh food is, of course, part of their secret.

But I suddenly found myself talking to my companions about “long” and “short” dough in bread making. Even Vivien was not familiar with this concept. So let me explain why bread is bad for you…

The Staff of Life… NOT!

Bread has always enjoyed a good reputation as the so-called “staff of life”. Christians keep writing to me and telling me that bread is praised in The Bible and therefore it must be above suspicion.

In fact, it is not. Bread today is a killer food. But why is bread bad for you? There is gluten sensitivity AND wheat allergy (not the same thing, note). These are bad news. Alzheimer’s, diabetes and heart disease are only the half of it.

But it wasn’t always so. In fact major changes in bread-making habits have resulted in a traditional food becoming our number one inflammatory food and number one health hazard, after microbes.

Dr. Amy McGrath, a doctor of history from Australia, has pointed out that bread is no longer manufactured in the way it used to be. Apparently the change in conditions of work, specifically the hours of shift-working introduced after the Second World War, meant that bread was no longer fermented overnight. Instead it was rushed through the rising process using so-called ‘improvers’ to fluff up the loaf. The result was a very different bread, chemically, to the traditional loaf.

Dr. McGrath hypothesizes that modern bread contains unchanged maltose in large quantities and reckons that is why her family can’t tolerate it. The same bread ingredients, baked using the old-fashioned “long dough” method, are fine for her and her children, since the maltose is removed.

She points out further that it was traditional practice in Ireland to cover oatmeal with water overnight before cooking and that this gave a much finer porridge.

The secret seems to be that this allowed a simple fermentation process to take place (there is sufficient yeast present) and once again this would remove maltose and other reactive complex carbohydrates. I’m sure most of the people did not appreciate this point but they learned that it was the best way to prepare that food.

As Dr. McGrath puts it, it seems that there is a lot of traditional wisdom that has been passed on from generation to generation simply by trial and error: people have found that certain procedures render food less toxic and harmful and therefore more nutritious.

We seem to be in danger now of throwing out this traditional wisdom and replacing it with modern technology, pre-packaged food and the mania for ‘instant’.

Dangerous “short dough” is a result of this ignorance.

The Dynamics of Food

In the 1980s I became increasingly interested in what might be called the dynamics of food – that is, the cooking and preparation processes, rather than the purely allergic or ‘ingredients’ phenomenon that is so important to the work at our clinic.

The first clues came from unrelated observations that were simply interesting facts:

It is easy to hypothesize that processing our food will alter the allergic basis for it and therefore produce a different reaction. Evaporated milk (heat-treated), for example, is tolerated by about half our milk-allergics. Indeed, the discovery of fire had a great deal to do with humanity’s ability to feed safely on a wide variety of foods. I wrote about that in my book Diet Wise.

Fire was probably a more important development than the wheel or tool making; it allowed Man to cook and eat otherwise toxic foods and so support a major population explosion that would have been impossible eating only raw food (raw food are mostly toxic, raw propagandists take note).

Dr McGrath came to visit me in Manchester back in the 1980s and we talked a lot. As a historian (thus ipso facto an anthropologist), she pointed out that Australian aborigines, Melanesians and Polynesians rarely eat food raw.

Traditionally they cook vegetables at high temperatures, steaming them or baking them in earth ovens. Asians, too, seldom eat raw vegetables or brown rice. Vegetables are usually cooked well, as in stir-fry. Rice is soaked, the water thrown away, then boiled, baked or fried, the husks or bran are fed to the pigs. Brown rice, they say, is indigestible. 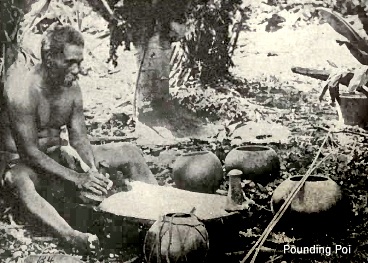 Polynesians cook poi (from taro root) for many hours

Indians often cook foods for a lengthy time. Greeks soak and boil beans for some hours. West Africans process corn for days. Taiwanese farmers boil sweet potatoes before giving them to the pigs as food. The Native American Hopi pick corn green and dry it to make bound niacin available.

Finally, Bronagh, my young secretary from Dublin, pointed out to me that certain Latin American tribes soak maize in lime juice before cooking it; apparently this frees up the niacin (B3), without which pellagra is common (as in the southern USA). They may not know any biochemistry but they have ancestral wisdom.

Of course we now know that my “food dynamics” are an important aspect of what I christened “Fire in the Belly”. If you haven’t read my masterful book of that title, it’s time you did! 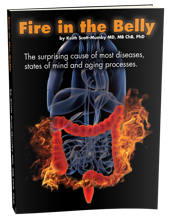 NOW SOME REALLY GOOD NEWS. IT’S FACTUAL INFORMATION YOU CAN USE TO HIT SUPPLEMENT CRITICS OVER THE HEAD WITH!

No Deaths from Vitamins. Absolutely None.

We all know how dangerous orthodox drug medicine is. It kills nearly half a million people annually, in the USA alone. Multiply that by figures from around the world and you have got MILLIONS of people killed or crippled every year by largely-worthless medicines.

Yet they have the EFFRONTERY to keep publishing attacks (taken up by mainstream media with huge fanfares and wild accusations), telling the gullible public that certain vitamin and mineral formulas are “dangerous”.

Now Andrew W. Saul, editor of The Orthomolecular News Service (the good guys, if you’ve never heard of them), tells us that after 31 years, the complete safety of supplements is once again confirmed by America’s largest database.

Zero deaths from vitamins. Of course this striking and valuable piece of health information will never make it onto the evening news.

Yet well over half of the U.S. population takes daily nutritional supplements. If each of those people took only one single tablet daily, that makes about 170,000,000 individual doses per day, for a total of well over 60 billion doses annually.

Since many people take far more than just one single vitamin tablet, actual consumption is considerably higher, and the safety of vitamin supplements is all the more remarkable.

In fact, the Orthomolecular Medicine News Service is inviting supplement bashers to submit any available specific scientific evidence conclusively demonstrating death caused by a vitamin! Bet there are no takers!

The post Why is Bread Bad For You? The Hidden Death Factor appeared first on Dr. Keith Scott-Mumby.