Using caution while out in the sun does not mean avoiding it all together. The sun provides the impetus for your body to produce vitamin D – which you need to absorb calcium.

A company in the United Kingdom – BetterYou – estimated that as much as 90% of the population could have dangerously low levels of vitamin D. Most of those people might not even know it!

Without enough of this crucial vitamin, you could have major problems with mood, immunity, bone health, and even cancer. Supplements and vitamin D-enriched foods help (especially for those with naturally darker skin or who live in extremely cold climates) but you’ll never find a better instigator for this vitamin then the sun.

Many studies link weight gain definitively to vitamin D deficiency but only in the last couple of years have scientists discovered that your fat-burning metabolism is boosted with careful exposure to regular sunshine.

You read that right. In data published in The Journal of Investigative Dermatology, researchers discovered that subcutaneous fat burns faster with responsible exposure to the UV rays of the sun.

Granted, all fat is not created equal. The true danger to your heart is visceral fat, which accumulates around your primary organs and is most obvious around the midsection. However, vitamin D deficiency has been linked to an increase in visceral abdominal fat according to a study published in the Anticancer Research journal.

In our modern world of the internet, streaming live television, and video games – is it any surprise that there appears to be an epidemic of vitamin D deficiency?

Universidad Complutense, a university in Madrid, compared two sets of females to determine the link between a diet high in vitamin D and weight loss. Those given foods enriched with the vitamin lost as much as three times more weight overall. 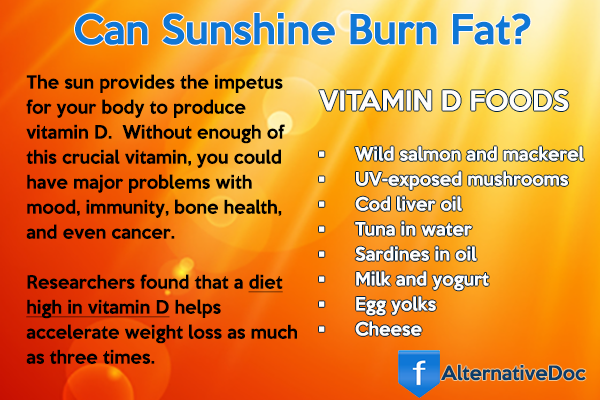 All you need is 15 minutes a day or 30 minutes twice a week of sunlight on the skin of your hands and face to boost your natural vitamin D production.

Sunlight during the summer months is much easier for most of us. Remember to use caution! 15 minutes a day or 30 minutes twice a week of sunlight is the limit without sunscreen – less if you have sensitive or extremely pale skin. If you plan to be outside for longer, it is crucial to protect yourself – burning is not the answer.

Before ten in the morning or after two in the afternoon is the best time to get gentle sunlight on your bare skin.

There are areas of the world where time in the sun is simply not possible. In addition, dermatologists are firmly against direct exposure to the sun.

During the winter, getting enough sunlight is incredibly difficult. You might need to consider a vitamin D supplement or boost your intake of foods high in vitamin D.

There are also lighting sources called full spectrum lamps which offer the benefits of sunlight when getting outside is impossible due to inclement weather or your personal schedule.

Side Effects of Time in the Sun

As our vitamin D increases, so does testosterone – a naturally hormone that burns fat and contributes to lean muscle mass. It also fights depression and boosts your immune system!
Of course, a healthy diet and regular exercise are the best foundation for controlling a healthy weight…but a little time in the sun will make you feel wonderful inside and out.